CST
translation
Source:SMM
On April 21, Jerry Warner received a regulatory letter from the gem Management Department, in which the Supplementary Agreement agreed to postpone the payment period to no later than April 30, 2020, as a result of its failure to pay the remainder of the restructuring investment of $355 million to the manager before the agreed date of March 31, 2020. the supplementary agreement stipulates that the payment period will be postponed to no later than April 30, 2020. So far, no progress has been made on the above matters, and the gem Management Department has expressed concern about this matter.

SMM4, April 21: April 21, Ji Rui Woneng received a regulatory letter from the gem management department, because the JRW reorganization investors failed to pay the remaining part of the restructuring investment of 355 million yuan to the manager before March 31, 2020, the supplementary agreement agreed to postpone the payment period to no later than April 30, 2020. So far, no progress has been made on the above matters, and the gem Management Department has expressed concern about this matter. 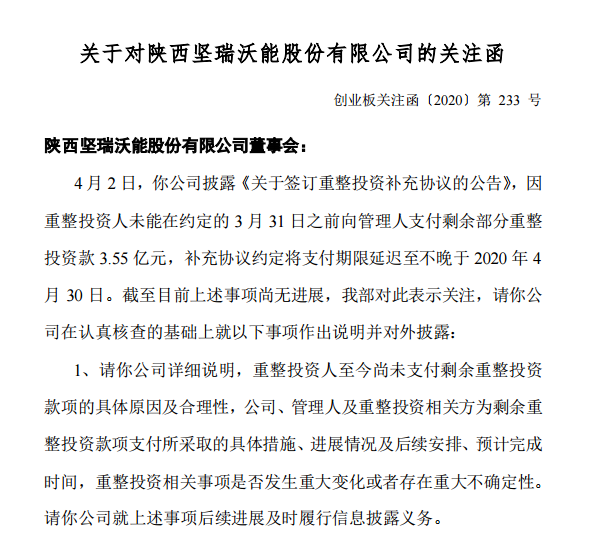 According to previous reports, at the end of December last year, the continuous loss of Jian Rui Woneng officially entered the reorganization process, Changde ZTE Investment Management Center (hereinafter referred to as "Changde ZTE") became the largest shareholder after Jian Rui Woneng reorganization. According to the then "restructuring investment agreement", Changde ZTE should pay a total of 710 million yuan to the manager by March 31, 2020, and become a major shareholder of Jian Rui Woneng. However, Changde ZTE still has 355 million yuan outstanding, according to an announcement issued by Jianrui Woneng on April 2. In this case, on April 1, Jianriwoneng signed a supplementary agreement with Changde ZTE at the beginning of the month, extending the payment of the investment to April 30, 2020.

Jianrivoneng said in a previous announcement that Changde ZTE's failure to make the remaining payments on schedule was affected by force majeure such as the Xinguan pneumonia epidemic, resulting in delays in the progress of work and therefore did not trigger the breach of contract clause. Public xin interest shows that Changde Zhongxing was established in November 2015 and is registered in Changde Economic and technological Development Zone of Hunan Province. Its business scope is to engage in the investment management and investment consultation of new materials with its own funds.

Jian Rui Woneng also said that as Changde ZTE did not pay 355 million yuan for the day-to-day operation and resumption of production of the company, if Changde ZTE could not pay the remaining amount by April 30, it would have a significant impact on the continued operation of the company. The company will even be at risk of being declared bankrupt by the court because the restructuring plan will not be completed within the deadline.

At the same time, the company issued a suggestive announcement on the risk of suspension and termination of the listing of the stock, indicating that because the remaining 355 million yuan of restructuring investment is used for the day-to-day operation and resumption of production of the company, if Changde ZTE and its designated investors are still unable to pay the remaining restructuring investment until April 30, 2020, it will have a significant impact on the subsequent continuing operation of the company. In turn, it affects the audit opinion of the accountant on the company's 2019 annual report, and also affects the risk that the company may suspend or terminate the listing.

In February, Jen Rui Woneng released a forecast for 2019 results, expected to achieve a profit of 2.81-286 million yuan in 2019, the fourth quarter to achieve a turnround. In this regard, the Shenzhen Stock Exchange questioned Jian Rui Woneng in order to avoid being suspended on the listing of earnings adjustment, but by Jian Rui Woneng denied. At present, the 2019 results audited by Kenrivoneng have not yet been released. In addition, Jian Rui Woneng also released a forecast for the first quarter of 2020, its first quarter attributable to shareholders of net profit is expected to lose 7.5 million-12.5 million yuan, compared with a loss of 540 million yuan in the same period last year. Mr Kennedy said the narrowing of the loss was mainly due to a reduction in financial costs as a result of the debt being liquidated by the manager and the fact that the Watma Battery had been liquidated out of the scope of the merger, resulting in a sharp contraction in the size of the company's business and a year-on-year drop in revenues and costs.

Since Jian Ruiwo can enter the bureau lithium battery, experience deceptive compensation storm, the market about Jianrui Warner rumors continue, every news affects the nerves of investors, whether Changde ZTE can pay the remaining money on time, also determines whether Jian Ruiwo can successfully stay in A shares.