CST
translation
Source:SMM
In the afternoon, the index fluctuated higher, with the Prev up more than 1%. On the disk, high-speed rail and other transportation plates change and pull up. In late trading, the index all fell back, the three major index gains fell back to less than 1%, the pressure of 2850 points is still the same. On the disk, semiconductors and other technology stocks are not eye-catching, airport shipping plate high shock, transportation concept after shock consolidation. Overall, market sentiment has fallen again and the moneymaking effect has deteriorated. By the end of the day, the Shanghai index was up 0.66% at 2838.94 points, the Shenzhen Composite Index was up 0.55% at 10527.99 points, and the Chuang Index was up 0.62% at 2020.77 points.

SMM4 17: morning index high open high, deep index, Chuang index rose more than 1%. On the disk, the market subject matter blossoms, the semiconductor, the digital currency plate pulls up one after another, the RCS plate receives the fund hot again, the tourism concept appears restless. Plate stocks up and down less, the money-making effect is general. Near the end of the morning, the index high consolidation, Prev impact 2850 fruitless, the index is stronger and stronger. On the disk, the semiconductor plate and so on impulse high pullback, the subject matter concept is relatively active. In the afternoon, the index fluctuated higher, with the Prev up more than 1%. On the disk, high-speed rail and other transportation plates change and pull up. Plate stocks up and down less, capital long will be strong, money-making effect for the better. In late trading, the index all fell back, the three major index gains fell back to less than 1%, the pressure of 2850 points is still the same. On the disk, semiconductors and other technology stocks are not eye-catching, airport shipping plate high shock, transportation concept after shock consolidation. Overall, market sentiment has fallen again and the moneymaking effect has deteriorated. 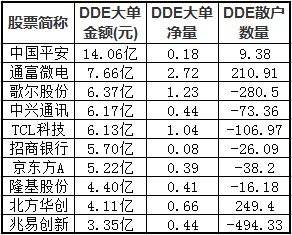 The concept of digital currency is high, Huijin shares, the public should be connected to the limit, Radio and Television Express, Julong shares to follow the rise.

Hotel and catering plate change pull up, Huatian hotel straight up, the first brigade hotel, Jinjiang hotel, Xi'an food, Dadonghai A and so on.

Semiconductor and component plate higher, Tongfu micro electric, Taiwan base shares have risen by the limit, Huazheng new wood, northern Huachuang, Dongshan precision and so on.

The infrastructure plate rose, Tengda Construction, Hongrun Construction, Construction and Research Institute rose by the limit one after another, and the shares of Jiajian and Longjian rose by more than 6%.

[central bank voice: credit funds will be guided to support the real economy through targeted reductions, re-lending and other policy measures]

On April 16, the central bank website said that the people's Bank of China has conscientiously implemented the decision-making arrangements of the CPC Central Committee and the State Council, flexibly used a variety of policy tools, and the intensity of counter-cyclical financial regulation and control has been greatly strengthened. the financial system has significantly increased its credit support to the real economy. In the first quarter, loans increased by 7.1 trillion yuan, the highest level in the quarter.

[IMF predicts China's economy will grow 1.2 per cent this year in response to the National Bureau of Statistics]

A few days ago, the (IMF) of the International Monetary Fund slashed its global economic growth forecast, predicting that the global economy will fall by 3% in 2020 and China's economy will grow by 1.2%. With regard to the IMF forecast, Mao Shengyong, director of the National Bureau of Statistics and spokesman for the National Bureau of Statistics, responded on the 17th that 1.2 percent is also a small number of positive growth among the world's major economies, and it should also be noted that the IMF forecasts China's economic growth of 9.2 percent in 2021. If the figures for this year and next are averaged, China's economy is still growing at an average rate of more than 5%. Assuming the world economy returns to normal next year, the repression caused by the epidemic in China will be released next year.

On the morning of April 17, Zhejiang held a mobilization conference on comprehensively promoting the construction of a strong province with high-level traffic. Zhejiang will focus on building a number of major projects that are leading, iconic and leading in the country, specializing in planning major projects such as "ten hundred billion" and "tens of billions". Of these, the "top ten hundred billion" projects are all "super transportation projects," with a total investment of more than 1.2 trillion yuan. The "tens of billions" project consists of 103 projects, with a total investment of about 2.4 trillion yuan, covering various modes of transportation, such as roads, railways, tracks, waterways, hubs, and so on.

[the China Foreign Exchange Trading Center plans to add a new type of foreign currency floating rate for transactions such as currency swaps in the interbank foreign exchange market from April 20, 2020.]

Citic Construction Investment said that in operation, investors are advised not to catch up in the short term and are concerned about: (1) medicine and essential consumer goods sectors, which are less affected by the epidemic and are expected to perform steadily in the first half of the year; (2) stocks and industries with low valuations, stable dividends and high dividend yields; and (3) new infrastructure sectors such as 5G, which have rebounded under counter-cyclical adjustment.

Haitong Securities said that from a technical point of view, the recent rebound belongs to rising wedge finishing, is a reverse form, this form has not fully formed a breakthrough, but we need to be prepared to fall again, especially blue chips such as Ping an of China, which has been continuously suppressed by the long-term moving average and has always failed to release a breakthrough. Even the strongest gem index is still blocked by the 60-day line, which should not be too optimistic in the short term. Assuming that there is a real decline again, then the high probability will be the last wave of concentrated decline, the use of fixed investment way to wait for the emergence of the bottom is a more sensible choice, the current position needs to control risk, is not suitable for radical operation, ready to reduce positions at any time.

Zhongyuan Securities pointed out that in the near future, it is more likely that the Prev index will continue to fluctuate within a narrow range around 2800 points, and that many uncertain factors affecting the operation of the stock index need to fully digest the development of the epidemic situation abroad, the direction of the stock markets in Europe and the United States, and the promotion of policies and measures by domestic regulators to boost the economy, and so on, need to continue to pay close attention to.

China Merchants Securities believes that improved financial data may bring about a recovery in corporate profits, northward funds may return, A shares will bottom in the second quarter to recover, ushering in an upward inflection point. On the whole, A shares are still in the two-and-a-half-year shock upward cycle that began in 2019, and the possibility of acceleration can not be ruled out in the second half of the year. The core of the general trend in the second quarter is the increase in fiscal and monetary policy, as well as the inflection point in corporate profits. After the policy was set on March 27, the following trends, such as the reduction of the interest rate on excess deposit reserves and the reduction in the reverse repurchase rate, are also in line with expectations. In the future, interest rate cuts are also to be expected. Affected by the epidemic, it is expected that the earnings of listed companies will bottom to a large extent in the first quarter, and after the second quarter, A-share profits will stabilize and pick up, and start a new round of earnings upward period.

Shanxi Securities pointed out that the recent trading opportunities of A shares are limited, whether it is the choice of defensive plate investors, or the choice of offensive plate investors, in the context of plate rotation acceleration are more difficult to achieve stable returns. Us stocks have rebounded sharply recently, the global equity market shows signs of stabilizing, the trend of foreign capital outflow is expected to reverse, and A shares are expected to move out of the trend. However, the disturbance of the epidemic has not yet been eliminated, the current point in time is still recommended that investors re-allocation and light trading, pay attention to the allocation of opportunities.