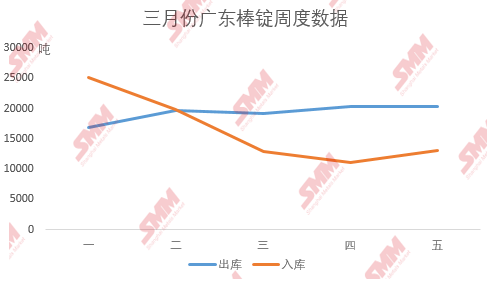 On the inventory side, Guangdong aluminum bar stocks were 73000 tonnes on Friday, down 26000 tonnes, or more than 26 per cent, from a high of 99000 tonnes at the start of March. The decline of aluminum bar inventory in March was mainly due to the reduction of supply side, while the output remained relatively stable, and the amount of storage fell step by step. In addition to the stock of aluminum bars in the public warehouse, the supply of aluminum bars outside the warehouse has also been significantly reduced. Several aluminum bar factories in southwest China have suspended shipments, and shipments to the Northwest Railway are also declining. Although seaborne aluminum bars in North China have arrived one after another, the holders may raise prices or limit quantities, which cannot fully meet the needs of the market. Since most of the aluminum bar plants settle aluminum water with the electrolytic aluminum plant at the average monthly price, after a series of sharp falls in mid-March, most aluminum bar mills suffered heavy losses and had to stop shipments to reduce their losses.

The sharp fall in base prices has led to a reduction in shipments by shippers, which in turn has pushed up processing fees. At present, aluminum prices are still in a weak state, demand is relatively stable, and the tight state on the supply side will continue. Under the background that supply exceeds demand, there is still room for Guangdong aluminum bar processing fees to rise in the short term.