Since Guangdong's aluminum ingot stocks peaked at more than 440000 tons last Tuesday (March 24), stocks have begun to peak and fall back. Today, the inventory of aluminum ingots in Guangdong was 412000 tons, 28000 tons less than the peak, a significant decline. 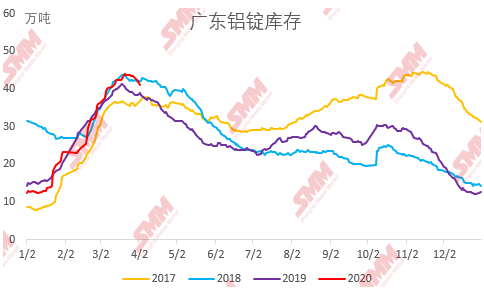 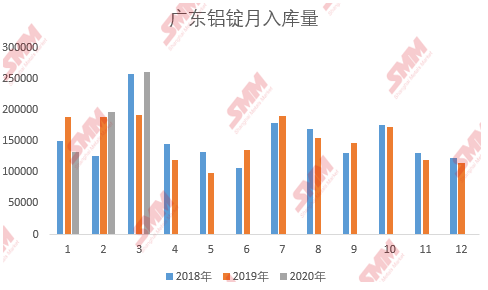 From the perspective of storage, the overall output in January-February was nearly 1/3 lower than that in the same period last year, but the output in March was basically the same as that in the same period last year. Specifically, in March, the storage of Guangdong aluminum ingots has continued to decline in the last five weeks, while there has been a significant increase in the second half of the month, especially in the last week of more than 60,000 tons, reaching the level of the peak consumption season. In and out of the warehouse, which is the direct reason why Guangdong aluminum ingot inventory has turned down in the last week or so. 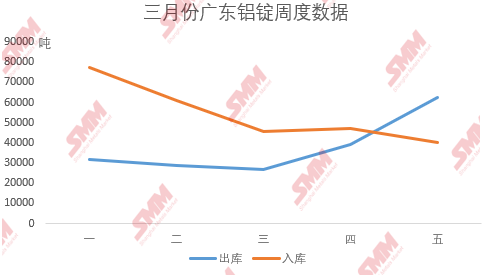 Considering that the production of processing enterprises in the lower reaches of Guangdong has basically returned to normal. From the feedback of large-scale enterprises, although export orders are affected, but domestic demand orders are still exuberant, downstream customers take advantage of low prices to place orders is not a small number, coupled with the stable demand of old customers, the recent downstream procurement volume has increased significantly. In the context of steady and increasing demand, even if the subsequent arrival of goods has increased, Guangdong aluminum ingot inventory is difficult to exceed the previous high, followed by a large probability is a slow storage process.