SMM4, March 2: oil prices plummeted to the lowest level in nearly 20 years, as many parts of the world in the form of blockade cities to combat the epidemic, market demand for oil shrank, oversupply is becoming more and more serious. 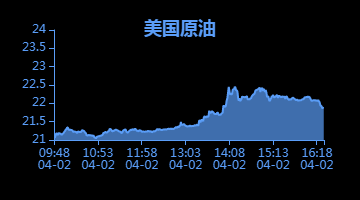 Prior to Trump's call with Putin, US Secretary of State Pompeo also called Saudi Arabia's Crown Prince Salman Jr. in the hope that he would shelve a record increase in production after a fall with Russia. According to people familiar with the matter, the Trump administration wants Saudi Arabia to shelve its plan to increase crude oil production to 12.3 million barrels a day in April and to help bring oil prices back to where they were before the crash in early March.

In just a week, the United States sent a series of signals to Saudi Arabia and Russia to mediate the price war. Many energy experts have recently said that the United States may lose its position as the world's number one oil producer this year as a result of the recent collapse in oil prices, falling demand and a sharp drop in capital investment.

Whiting Petroleum, the US shale oil company, announced on Wednesday that it had filed for bankruptcy, suspending its shares on the New York Stock Exchange, becoming the first large US shale oil producer to fall since the outbreak of the international oil price war.

Whiting Petroleum said in a statement that it had to restructure its finances as a result of the oil price war between Saudi Arabia and Russia and the impact of the Xinguan pneumonia outbreak, which had led to a "serious downturn" in crude oil and natural gas prices.

Whiting Petroleum said it would continue to operate, with suppliers, partners and employees unaffected by bankruptcy restructuring and expected to produce about 42 million barrels of crude oil by 2020.

Headquartered in Denver, Whiting Petroleum is one of the major shale oil companies in Bakken, North Dakota, and the largest oil producer in Colorado.

Many shale oil producers said they would cut drilling budgets and reduce drilling rigs, such as Apache (Apache), a medium-sized US oil producer, which said it would cut its budget by 37 per cent, particularly by phasing out all rigs in the Permian basin. in addition, the company said it would cut its dividend spending by 90 per cent. Devon energy company (Devon Energy) also announced a 30% cut in spending, focusing on Oklahoma and Wyoming.

Western Petroleum (Occidental Petroleum), one of the largest shale oil producers in the United States, has announced that it will not be able to pay $2.8 billion in dividends on schedule and continue to invest to maintain existing production without adding additional debt. The company plans to cut its quarterly dividend to 11 cents from 79 cents from July and cut spending by about 32 per cent to $3.6 billion this year, while its market capitalisation has shrunk to $11 billion from a high of $46 billion last year.

In addition, Devon and Murphy Oil have decided to cut their budgets by 1/3.

Shares of American oil companies have been hit hard recently, with energy stocks, including Chevron, Western Oil, Apache, ExxonMobil and ConocoPhillips, all falling sharply. In this case, it may be difficult for US shale oil companies, which are already highly indebted, to raise money by borrowing.

"[focus] the collapse in oil prices has led to a surge in freight rates for oil tankers snapped up by many countries.

The United States has grown into the world's largest oil and gas producer, but current oil prices are below the production costs of many American drillers. ExxonMobil, Western Petroleum, Chevron and Crownquest Operating LLC drilled wells in Permian basins to make a profit of $31 a barrel, according to Rystad.

As many as 70 per cent of the 6000 oil exploration companies in the US could eventually fail as a result of the epidemic and the oil price war, according to analysts. In addition, if WTI crude oil stays low for the next three months, US listed companies and private producers will be forced to shut down production on a large scale, and only the supergiants will be able to tide over the difficulties.

The oil price: what does it mean for your investments?
Oil is one of those commodities where the price is published continuously. Crude oil is the most traded commodity in the world (followed by coffee). The question is how does knowing the oil price help in assessing and managing your investments? Oil is crucial to our modern economy. And while we may feel that the world is going greener and petroleum-run vehicles are becoming old school, virtually everything that we use on a daily basis, whether it’s one’s car, air travel, plastics, every-day consumer products, the vast majority of these are derived from oil and depend heavily on the global oil supply chain.

Analysis: China’s tariffs on US aluminium scrap to change trading pattern
Aluminium scrap imports from the US face a 25% tax from April 2 onwards as China ended its tariff concession on 128 items from the US in a retaliatory move amid an escalating trade war.

US to Levy Punitive Tariffs on Chinese Steel exported via Vietnam
The US department of commerce says it will levy a 199.43% anti-dumping duty and 39.05% anti-subsidy duty on corrosion-resisting steel products using Chinese substrate imported from Vietnam.

Barclays: Copper and Oil Price to Slip in 2018
Barclays analyst Warren Russell said that the strong trend of copper and oil price may weaken in 2018.

China Appeals for Relaxed Export Restrictions by the US
China's Ministry of Commerce said China is willing to increase imports from the US.