CST
translation
Source:SMM
The average price of electrolytic manganese fell sharply in March, and the purchase just needed to be dull in the lower reaches. 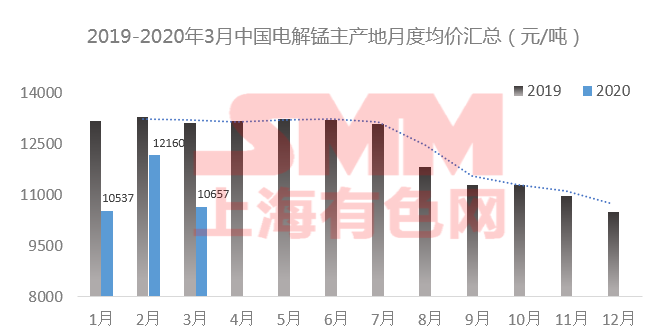 In the domestic spot market, transactions in the main producing area of electrolytic manganese at the end of March were obviously general, some manganese mills delivered steel plant orders, and some manufacturers had signed orders for delivery until mid-April. However, according to relevant market operators, there is no shortage of sporadic low-price resources in the manganese triangle region, aggravating the atmosphere of negative decline in manganese prices in the later period.

Domestic and foreign steel recruitment, in March, domestic and foreign steel mills to metal manganese procurement bidding price fell by more than 1000 yuan / ton, of which Nanjing Iron and Steel in March to metal manganese ingot bidding price of 11200 yuan / ton, month-on-month February pricing down 2280 yuan / ton. Overseas Posco, South Korea, invited bids for 3990 tons of electrolytic manganese tablets in April, down 190 tons from March, while the price of the April tender fell more than $350 a tonne from March. In March, the spot price of electrolytic manganese did not rise for a short time, but at the end of March, South Africa was adversely affected by the epidemic situation. In order to control the spread of the epidemic and prevent and control the epidemic, the local government said that it had entered a state of blockade, thus affecting the import of domestic manganese ore. Therefore, according to SMM from the end of March to the beginning of April, the quotation of imported manganese ore continued to rise, and the electrolytic manganese market was driven by the phenomenon of manganese ore increase. Guangxi area and manganese triangle mainstream quotation appeared at the beginning of this week a small increase of 50-100 yuan / ton, many operators said that the price rise is also related to the increase in pricing sentiment of more manufacturers.

However, at present, the price of manganese may not rise sharply, mainly because it is estimated in early April that the supply of electrolytic manganese in the national market may reach about 3900 tons, showing a trend of only increasing rather than decreasing compared with March, coupled with the aggravation of the epidemic situation in foreign countries and the continuous sharp increase in the number of infected people. Among them, South Korea's Posco steel mills in India and other countries have indicated that they will temporarily suspend production to resist the spread of the epidemic. Therefore, SMM expects that the overall release of domestic manganese demand in April will be reduced, the domestic downstream procurement demand performance is not good, it is difficult to support the manganese price rise, or will continue the weak and stable trend in the later stage.