SMM: on the evening of March 31, BYD released its 2019 annual results report, with a total operating income of 127.739 billion yuan and a net profit of 1.612 billion yuan for shareholders of listed companies in 2019.

In its financial report, BYD pointed out that during the reporting period, the operating income of BYD Co., Ltd. and its subsidiaries decreased by 1.78% compared with 2018, which was basically flat, and the net profit attributable to shareholders of listed companies decreased by 42.03% over the same period last year. This is mainly due to the impact of industry and policy changes and the increase in R & D costs in the current period. 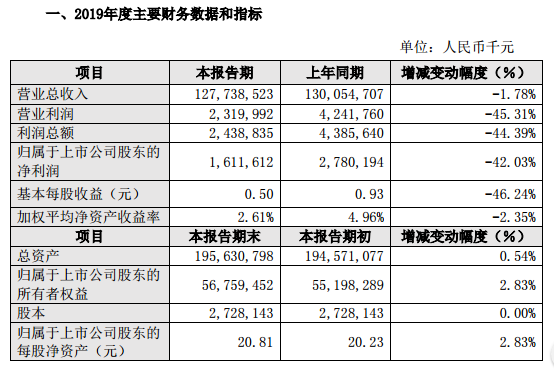 In the field of new energy vehicles, the Group continued to promote the upgrading of the dynasty series, releasing several models during the year, including the new generation Tang EV, the new Song Max plug-in hybrid version, the Quanxinyuan EV, the new Qin EV and the iterative model Song Pro. In 2020, the group will launch E1, E2 and e3 models one after another, contributing new growth points to the development of the group

In addition, the Group launched a global layout, expand production capacity, and create advanced manufacturing bases at home and abroad. On the basis of Shenzhen, Huizhou, Shantou, Shanwei, Shaoguan, Xi'an and other production bases, the new Changsha base has been successfully put into production within the year, and the new bases located in Zhongshan, Xi'an and other places are also under construction.