CST
Source:SMM
According to the SMM survey that covers 102 blast furnace steel mills, 42.2% of them are undertaking maintenance or have trimmed output (excluding mills that reduced output by adjusting rates of equipment utilisation and raw material ratios), down from a ratio of 50% last week, as some long steel mills have recovered production from maintenance.

SHANGHAI, Mar 11 (SMM) – As China’s economic activity recovering on slower new coronavirus infections, Chinese steelmakers are recovering production, showed the latest SMM survey.  Demand for steel, however, seems to have not picked up pace yet, as capacity utilisation rates at reopened manufacturers remain low and construction sites have yet to swing back to high gear.

Steelmakers: Flat steel production to decline in March, while long steel output to inch up; EAF mills and re-rollers resume

According to the SMM survey that covers 102 blast furnace steel mills, 42.2% of them are undertaking maintenance or have trimmed output (excluding mills that reduced output by adjusting rates of equipment utilisation and raw material ratios), down from a ratio of 50% last week, as some long steel mills have recovered production from maintenance.

Maintenance at flat steel mills, meanwhile, continues, lowering the total planned production of hot-rolled coils and plates across major mills in China for March by 8.1% from realised output in February to 8.94 million mt.

The production reduction, however, is unlikely to ease supply pressure in the spot market, as the cuts are made to steel producers’ supply for internal consumption and direct supply for end-users.

Following the recovery at some mills, planned production of long steel for March is estimated to edge up from actual output last month. Electric arc furnace (EAF) mills and re-rollers, meanwhile, are recovering, and saw the average operating rate increasing more than 5 percentage points from February. Operating rates across EAF mills in China stood at 7.58% as of March 3. 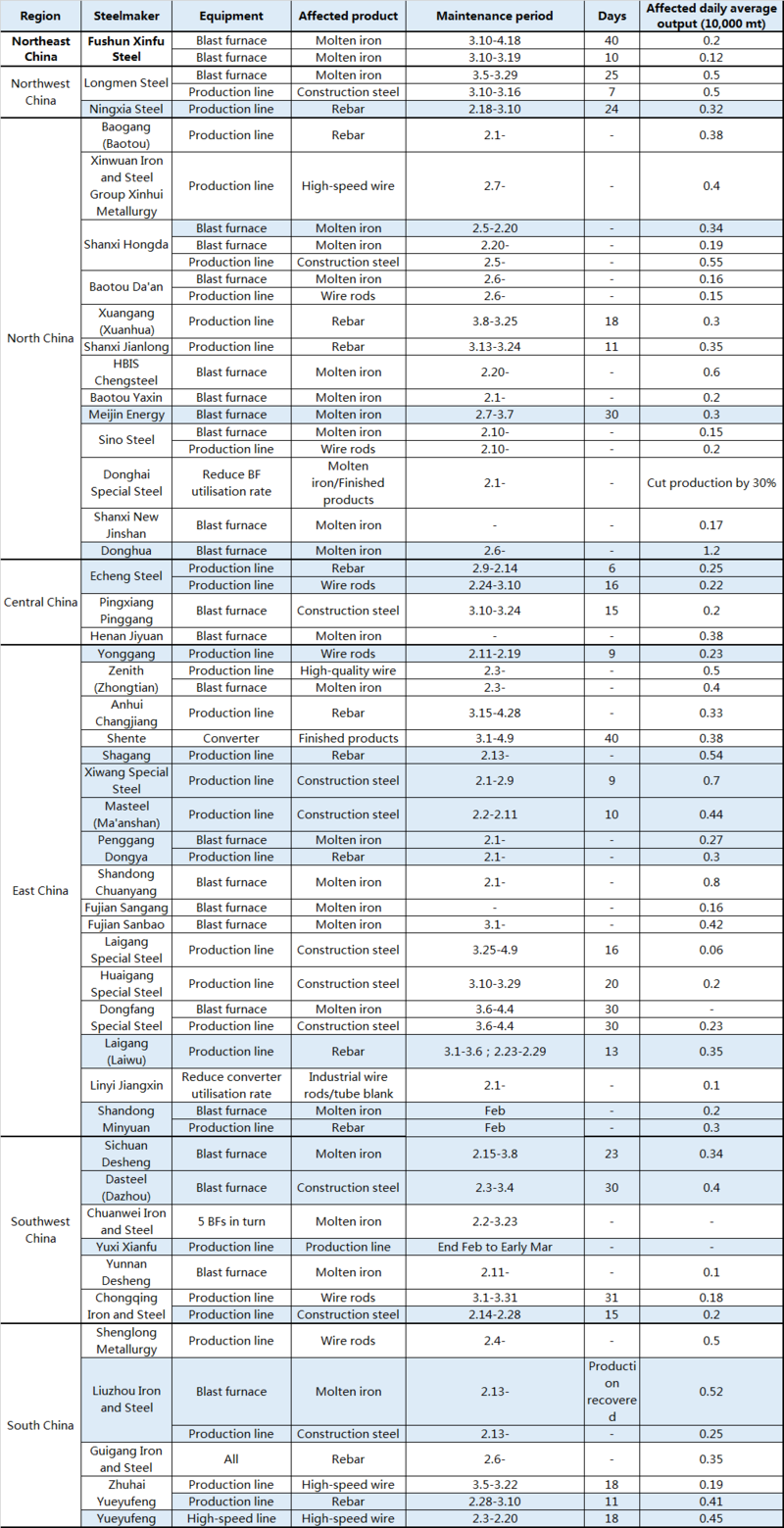 End-users: Over 90% of end-users have reopened in many regions, but capacity utilisation rates stay low

More than 90% of end-user enterprises have resumed work in many Chinese regions by this week, as people return to work after the removal of travel curbs and end of self-quarantine period. More than 60% of workers have returned to work in many regions, and the ratio is expected to exceed 70% later this month.

Manufacturing: The resumption of manufacturers have accelerated significantly in terms of reopening rates and worker-return-to-work rates, but capacity utilisation rates are downbeat.

Home appliances: Labour conditions at major Chinese home appliance producers including Midea, Gree and Haier have returned towards normal levels after their re-openings in the second week of February, but they have yet to resume all their production lines, with capacity utilisation rates currently ranging from 50% to 70%.

The epidemic has almost suspended sales at brick-and-mortar retailers, forcing home appliance manufacturers to turn to online sales. Home appliances sales appear to be recovering following the easing of the virus crisis in China, and is set to receive a strong boost, recovering to normal levels, after sales at brick-and-mortar stores pick up on logistics recovery. Data showed that retail sales of home appliances in late February increased 11.1% from the middle of the same month.

Automobiles: The auto sector saw weaker performance. Sluggish sales deterred carmakers from ramping up their capacity, with capacity utilisation rates standing below 40%, even as reopening rates and worker-return-to-work rates have both returned to 80%.

Car sales in China are unlikely to recover substantially in the short term, as people are expected to hold back from buying large-ticket durable goods with the virus crisis hitting the economy and personal income.

Construction: Construction sites in China are recovering gradually, and the pace varies across areas.

Construction in southwest and south China such as Chengdu, Chongqing, Yunnan and Jiangxi, has recovered to about 30% of normal levels, and a slew of projects are poised to resume operations after authorities eased their curbs. While labour conditions remain tight, demand for steel is recovering.

East China such as Shanghai, Anhui and Fujian saw construction recovering to about 50%, as a raft of key projects and large-scale infrastructure projects started earlier this month. Small construction sites and housing projects, however, are unlikely to resume work in the short term.

In Hangzhou, construction has recovered to 50-60%, and some housing projects are expected to resume work after March 20.

Fears of virus infection and labour tightness slowed construction recovery in north China such as Beijing, where has just recovered to 20-30% of normal levels. Pre-holiday stockpiling to underpin rebar prices
Spot prices of rebar will face downward pressure to recover this week as supply still firms at high levels and end-users demand has yet to shake off the impact of seasonality, which continues to weigh on market sentiment and deter shipments. Nonetheless, the spot prices will be underpinned on optimism that the recent outbreak of COVID-19 cases in Beijing is under control with a decline in confirmed cases in the city and on expectations of stepped-up purchases ahead of the three-day Dragon Boat Festival holiday.

Daily crude steel output at CISA key mills in May jumped 6.8% from month ago
Crude steel output across major mills in China averaged 2.09 million mt per day in the last 11 days of May, up 0.58% from the level seen in the second 10 days of the same month and nearing the record high of 2.11 million mt notched in mid-September 2019, according to data from the China Iron and Steel Association (CISA) released Wednesday.

All
MOST POPULAR
1.SMM Review of China's Metals Market during CNY Holiday and Forecast
2.The IMF Raises Its Global Economic Growth Forecast for 2023, with China Leading the Way
3.MOFCOM Intends to Ban/Restrict Exports of 139 Technologies Involving Steel, Nonferrous Metals, Photovoltaics, Semiconductors
4.Ferronickel and NPI Imports Stood at 619,000 mt in December, with 28.7% MoM increase in FeNi Imports
5.Imported Iron Ore Prices to Fluctuate Widely this week
Shanghai Metals Market
Privacy PolicyCompliance CentreSMM Credit ServiceContact UsAbout UsTerms & ConditionsSitemap
Notice: By accessing this site you agree that you will not copy or reproduce any part of its contents (including, but not limited to, single prices, graphs or news content) in any form or for any purpose whatsoever without the prior written consent of the publisher.