CST
Source:SMM
Tesla is likely to use lithium iron phosphate (LFP) batteries from CATL in Tesla Model 3 vehicles made at its China plant, which triggered talks about future development of LFP and ternary batteries.

Use of high-nickel ternary materials to seek market shares 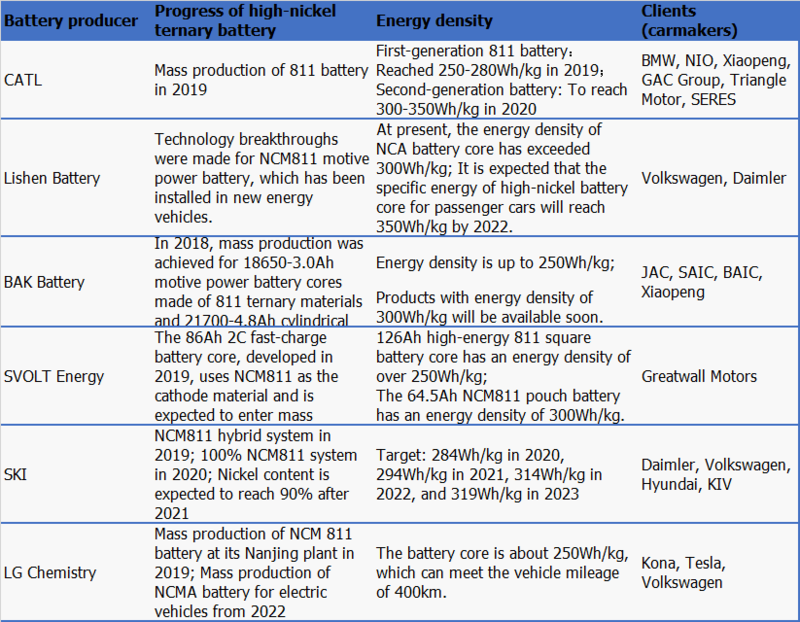 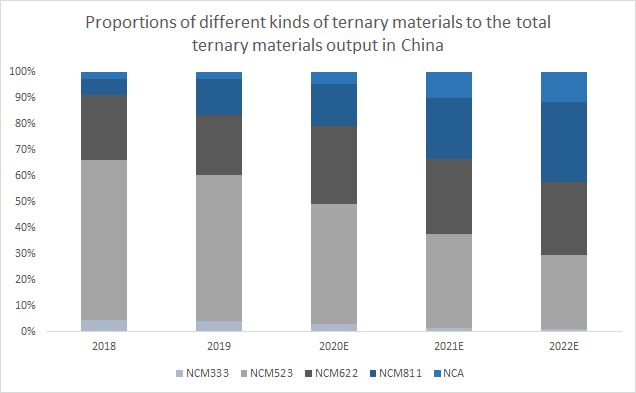 BYD announced in 2019 that it will launch new LFP batteries during May-June 2020. Energy density of the new batteries will be increased by 50%, the service life will be up to 8 years and the cost will be saved by 30%, which can meet electric vehicles’ 600 km endurance. BYD’s "Han" EV/DM was in the second batch of the Catalogue of Recommended New Energy Vehicles released by the Ministry of Industry and Information Technology in 2020. EV has two versions of endurance mileage of 550km and 605km, and the system energy density stands at 140Wh/kg, which is expected to be increased to more than 160Wh/kg in 2020. Volume utilisation rate of CATL’s CTP battery was increased by 15%-20%, the number of parts was decreased by 40%, production efficiency was increased by 50% and the system power density was raised by 10%-15%.

High-nickel ternary battery is expected to be a preferred choice in mid-range and high-end passenger cars in the next three years, considering the dominant advantage in energy density that it enjoys and the technology bottlenecks regarding mass energy density that LFP battery faces.

LFP battery is expected to dominate the A0 and A00 new energy passenger car market as its travel range could reach a maximum of 600 km on a single charge. However, LFP may lose its cost advantage if CTP technology could be applied in high-nickel ternary battery, which could bring its cost close to that of LFP battery.

At present, LFP is safer than other batteries as it enjoys the highest thermal and structural stability among all cathode materials. This advantage has enabled LFP battery to grab 96% of market share in new energy buses. Ternary battery, on the other hand, has poor stability as it could compose and release oxygen under external temperature of about 200 ° C, which could potentially burn together with flammable electrolyte and carbon materials inside battery.

Preference of carmakers and consumers

Tesla is likely to choose LFP battery for use in its Model 3 cars, in light of its low cost and long travel range. Chinese automakers such as BAIC and SAIC have also started to use LFP battery. Some carmakers may adopt the same strategy as Tesla, but the implementation is likely to wait until the end of the year.

As a major driver of new energy vehicles, passenger vehicles also have many problems that dampen consumer interest, including frequent accidents, high inconsistency between the alleged and actual travel range, low value preservation, as well as insufficient charging poles.

Global Demand for LFP Likely to Reach 2 million mt by 2025
The prices of SMM lithium iron phosphate (power battery) stood at 92,000 yuan/mt as of today, and the average price was 1,000 yuan/mt higher than yesterday.

Exclusive: LFP Sharply Expanded Production Capacity in H2, and to Usher in Overcapacity in 2022
The proportion of LFP batteries installed in NEVs has increased from 38% in January to 51% in July. The installed capacity of LFP battery is expected to continue to grow in H2.

SMM Webinar Series: The Impact of Solid-State Battery on Cobalt-Lithium Industry
With the advancement of the NEV industry, battery technologies has become the highlight in the New Energy Cobalt-Lithium industry, especially the solid-state battery considering its outstanding performance in energy density and safety.

New Energy News Roundup
According to Experian's new car registration data, Tesla will surpass Audi in 2020 and become the fourth largest luxury brand in US, and is gradually approaching the top three BMW, Lexus and Mercedes-Benz.