As business activity starts to resume after the extended holiday, activity levels remain subdued. Quarantine regulations mean anyone moving between provinces need to be self-quarantined at home for 14 days, while areas of central China remain locked down. Our Shanghai office, for example has only about 20% of staff in the office this week, with most working from home, and this is effecting all industries. Our channel checks suggest trading activity is starting to return in most areas, and overall confidence in future demand remains solid with the government clearly sending out a supportive message towards economic support in the face of the disruption. Activity at end users is varied across industries and regions however, with many requiring govt permission to restart such as is Guangdong. It remains too early to say whether there is any aggregate demand loss, but clearly activity remains subdued and demand will be delayed. Inventory is rising for most metals, but given this is still normal for this post CNY period markets appear unperturbed for now.

Transportation restrictions remain the main disruptor in the market currently, with backlogs building at many ports, and smelters and mines in many internal provinces in particular struggling to move material around as we have discussed previously.  This continues to be a particular issue for zinc and copper smelters in terms of disposing of sulphuric acid, and alumina refineries in terms of raw material deliveries and sending alumina to smelters. We estimate 1.8mt of alumina capacity has been disrupted by the logistics issues.

Please see below for more details on the impact to each metal, and don’t forget to join our webinar on the latest impact from the virus, and a deep dive into copper and zinc markets, tomorrow ( February 12) at 5PM China time. Book your slots by following this link https://register.gotowebinar.com/register/8327328738461958411 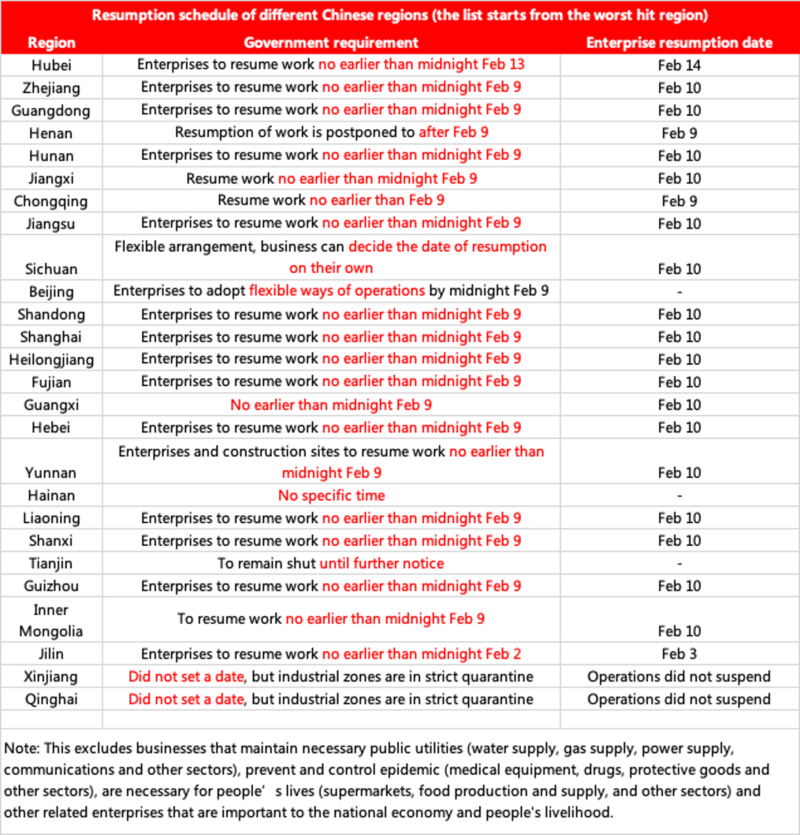 The epidemic outbreak did not impact production at Chinese copper smelters during the Lunar New Year holiday, but some smelters plan to scale back operations this month as they are running out of storage capacity for sulfuric acid and feedstock for production amid logistics constraints. Slower customs clearance has left some copper concentrate shipments stranded at ports, which is likely to prompt more smelters to curtail production as their stockpiles are depleted.

The impact on the demand side is more tangible. Enterprises in east and south China, home to a large number of copper consumers, have resumed from February 10, and some regions even require that enterprises cannot resume production unless they receive the approval from authorities. The broad-based recovery across copper processors is unlikely to be seen until at least the third week of February. A potential shortage of manpower, raw materials and finished goods transportation woes, however, are expected to subdue operating rates after copper processors resume production.

Delayed consumption has put copper smelters under great pressure in discharging copper cathode, growing in-plant inventories. Smelters had to pledge their cargoes or deliver to SHFE warehouses, leading to two consecutive weeks of gains in SHFE copper inventories. Copper inventories are likely to continue to trend higher, which will hamper upside potential in copper prices that have seen some correction from the plunge on panics stemming from the epidemic outbreak.

However, resumption schedules of primary aluminium downstream consumers are different.

Producers of primary aluminium alloy and billet did not suspend production during the CNY holiday, as most of them are located near primary aluminium smelters. But logistics constraints amid the epidemic outbreak have lifted inventories of finished goods at those producers, leading to the shutdown of a plant in Inner Mongolia and production curtailments at others.

For producers of aluminium plate/sheet, strip, foil and profile, logistics troubles and worker shortages forced major plants in Henan and Hunan to trim output, even as no plants shut. Those plants usually maintain production during the CNY holiday, and so did they this year. In east China’s Jiangsu, Zhejiang and Shanghai, large-scale plants resumed production on Monday February 10 after they received the approval, while small and medium-scale plants will remain shut until at least next week. In Guangdong, plants are not to resume production until next week. The broad recovery of manufacturers of aluminium sheet/plate, strip, foil and profiles is likely to be seen next week.

Factors including further delayed resumption date in some regions, the absence of approval from authorities, worker shortages and logistics constraints, will keep most of aluminium processors in China from resuming production this week, growing social inventories of aluminium ingots. SMM expects the broad recovery to come next week. 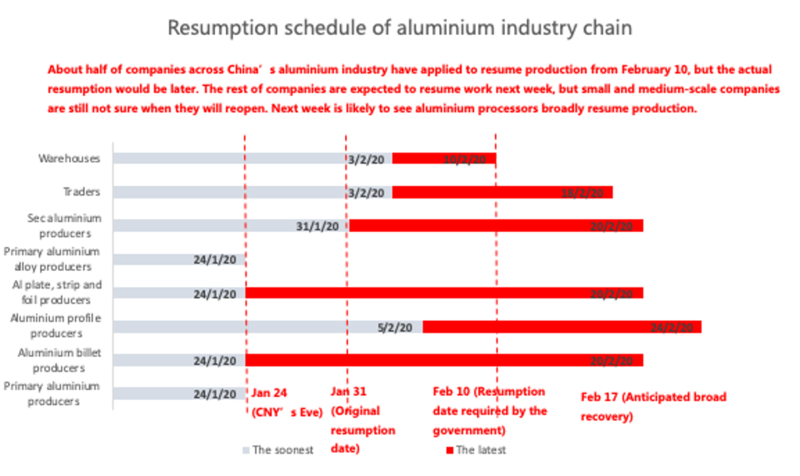 Operating rates across licensed secondary lead smelters stood at 31.81% in January, down 16.03 percentage points from a month ago. Those smelters produced 114,100 mt of secondary lead last month. The SMM survey for last month added six companies to 34, bringing total capacity to 4.31 million mt. One is large-scale and the other five are medium-scale.

The Lunar New Year holiday and maintenance at Huabo, Yichen and Jinyi lowered production across licensed secondary lead smelters significantly in January. The operating rates across unlicensed secondary lead smelters also slipped last month, as narrowed profits prompted small plants to begin the CNY break at the beginning of the month. The recovery in profits later in the month was not strong enough to prompt them to resume production. 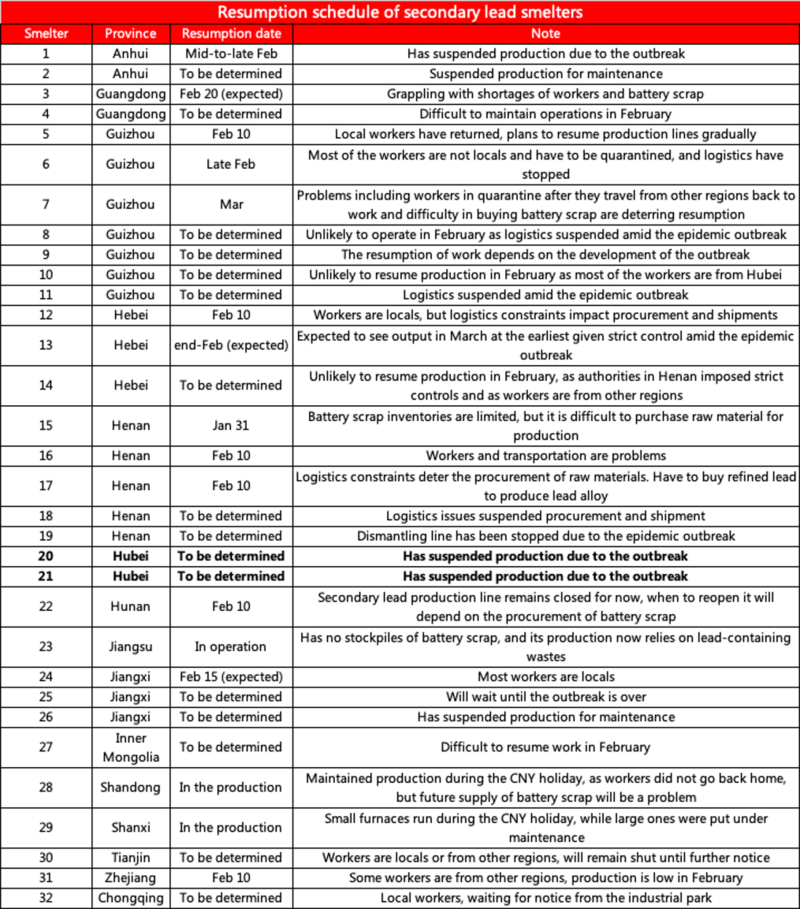 Most traders of refined nickel have returned to the market from the CNY holidays.Some traders bought cargoes from downstream stainless steel mills that continued production over the holidays, according to SMM survey. Traders remained cautious about procurement amid the ongoing transportation curbs in some regions, and availability of cheap cargoes was limited.

Producers of alloys and electroplating factories that halted operations during the CNY holiday will resume based on local regulations, with some of the producers resuming operations on February 17.

Major blast furnace steelmakers are currently under normal operations with some small plants in maintenance due to squeezed margins and inventory pressure, showed a SMM survey as of February 10. This has weighed on rebar production, while limitedly impacted the output of hot-rolled coil.

Compared to the demand front, supply of steel has seen less impact from the coronavirus outbreak as steel production stayed at high levels. Current resumption of downstream consumers fails to meet expectations, and recovery could be further delayed till early March. This is expected to keep steel prices under pressure in February, before a pickup in demand triggers a price rally in March.

Operating status of steel industries in China: In Hebei, some cold-dip galvanising factories have resumed work, but the overall recovery in the manufacturing sector remained sluggish. In northeast China, around 80% of the cold-galvanised plant resumed work, but only less than 30% of the end-users recovered. Only a handful of the processing and downstream enterprises in Guangdong have received the green light to resume operations as of February 10. In Shandong, most cold-galvanised plants have resumed production, with around 20% of end-users returning to the market.  In Shaanxi, resumption of steel end-users has been delayed by a week, while operations are expected to resume around end February in Jiangsu. Recovery of end-users remains unclear in Henan.

Processor and end-user: Processing companies have partially resumed operations in different areas, while end-users have not returned for restocking, resulting in muted trades. Producers remained concerned about uncertainties of the coronavirus epidemic development.

Warehouse and Storage: Most warehouses have reached their storage limit, while inbound and outbound operations have resumed at major warehouses in North China. Some customers have been allowed to unload cargoes on February 11.

Transportation: Automobile transportation is recovering gradually in various regions, but ocean shipping is under great pressure due to cargo backlog at ports of destination.

Transportation update by region: In Hebei, automobile transportation has resumed 40-50%, while cargo backlogging at ports disrupted seaborne shipments. Auto shipping in Northeast China has resumed to 50-60%, while domestic trade in Bayuquan was in stagnation due to piling up cargoes at destination ports. In Guangdong, only large fleet with transportation permits can carry out loading and unloading at ports, with small convoys being restricted. Currently, each port has an average of 30 vessels, with 100,000 mt of backlogged cargoes. This kept more ships from arriving the ports. On the other hand, in Shandong, auto transport resumes about 30%, while maritime transport remains restricted as port congestion deterred shipments from the departure ports. In Jiangsu, auto transport resumes around 20-30% with limited numbers of drivers. In Henan, transportation remains stagnant with no transport vehicles on the road. 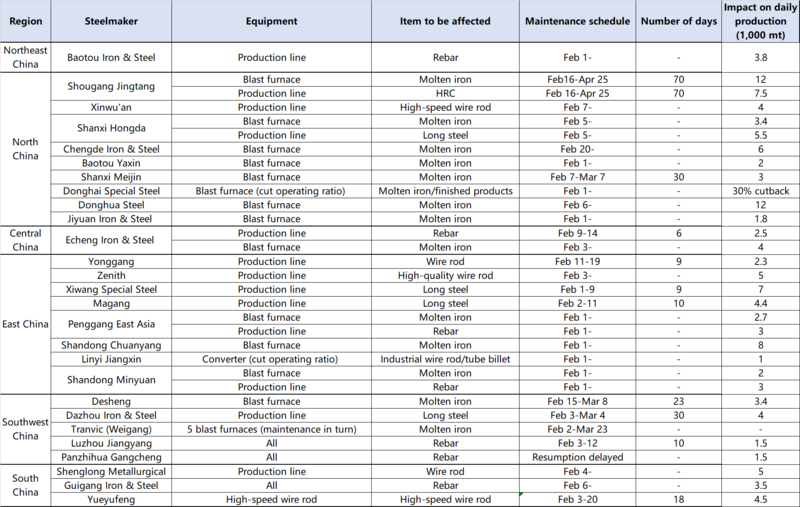 Some of the factories may resume work progressively from February 10, while some of the key producers did not stop operations over the extended holidays.

In Hubei, the epicentre of the coronavirus epidemic, approval for resumption of operations has yet to be granted. Raw material producers may see their operating rates slipping to 30-40% in February, due to manpower shortage. Cathode material plants also extended their holidays given coronavirus risks and scale-back production of downstream battery producers.

In Zhejiang, where most Chinese precursor producers are located in Zhejiang, producers need to submit applications for plant recovery, and the first batch of producers are able to reopen this week.  Factories in Guangdong will be under review for recovery this week, and some production lines are expected to resume operations. Some battery makers delayed their resumption to February 17. Production in Hunan and Sichuan resumed on February 10 and 11 respectively, while factories in Jiangxi are allowed to resume operations on February 17.

Logistics issue will remain the major obstacle to the resumption of the industry chain. For example, Zhejiang and Jiangsu only allow cargo delivery within the provinces, and slower shipment speeds may twice the delivery time for fulfilling orders from remote areas. Some areas are still under restrictions on truck transport, which could be lifted by this weekend.

Purchasing demand increased from major producers of materials that maintained operations over the holidays, on the back of depleting raw materials inventories. This is expected to buoy prices of cobalt salts and ternary precursors. Small and medium-scale producers currently have inventories that can meet production need this month. Some large producers had purchased large quantities of low-cost raw materials pre-holiday, which could be able to meet demand this month.

Some smelters in Yunnan remain suspended for maintenance due to the holiday lull, the epidemic outbreak and ore shortage. Producers that maintain operations hold back cargoes due to logistics issues and weak downstream demand. The severe impact of the virus kept some smelters in Jiangxi closed, while some continued to produce with piling up inventories.

Downstream sectors of tin are mostly located in eastern and southern China which is badly hit by the epidemic. Major downstream producers in south China have yet to resume operations, and difficulties in procurement have impacted raw material supply, orders and sales at tin downstream producers.