Although electrical power costs in Zhaotong are higher compared with other cities in Yunnan, sustainable availability of high-grade silicon ore has made Zhaotong ideal for investment, amid supply tightness of high-quality ore in China.

Yunnan currently has an annualised designed capacity of 1.3 million mt, located mostly in the western part of the province, including Dehong, Baoshan, Nujiang, and Lincang that boast rich hydro-power resources.

The capacity utilisation rate, however, stands at low levels in Yunnan due to maintenance and dry season issues. The monthly average operating rate at silicon producers in the province stood at 46% in 2018.

China’s silicon industry features low concentration ratios, as small and medium-scale producers with a capacity below 40,000 mt/year accounted for 89% in terms of number and 53% in terms of production capacity of the total silicon producers in China.

Silicon plants in Yunnan are mostly of medium-scale with an annualised capacity of 20,000 mt, invested by companies in Fujian and Zhejiang provinces before 2010. The past decade saw limited silicon capacity addition and expansion projects in Yunnan.

The opportunity of expansion/merger of Yunnan's existing small and medium-scale silicon companies came even smaller as the local implementation of desulfurisation methods over the past two years, ahead of other major silicon production areas in China, increased the cost of investment by around 10%.

Silicon metal can be categorised into metallurgical-grade and chemical-grade products based on downstream applications. Metallurgical-grade silicon, used to produce aluminum alloy, also sees limited chances of new investment due to demand bottleneck in the downstream car market, which is the main consumer of silicon-aluminium alloy. Besides, silicon accounts for only 3-7% of the feedstock to make silicon-aluminium alloy.

There will be more opportunities to invest in chemical-grade silicon on the back of the domestic shortage of high-quality ore and the trend in demand growth. Chemical-grade silicon is used mostly in organ silicon monomer and polysilicon, which have higher requirements for the stability and composition element of raw materials.

For instance, chemical-grade silicon metal has to reach certain standards of content regarding not only main impurities such as iron, aluminium, and calcium, but also trace elements like phosphorus, boron, titanium, and carbon.

On the policy front, major production areas such as Yunnan and Xinjiang have imposed controls on the total silicon capacity, but a national-level production quota scheme has not been introduced.  Yunnan aims to control silicon metal capacity within the province below 1.3 million mt/year by 2020, while boosting production and capacity of the top five producers to above half of the market share.

New silicon projects in Yunnan should be equipped with downstream facilities to obtain government approval.

Xinjiang enjoys the advantages of lower electricity prices and thermal power plants that could guarantee production all year round without the impact of seasonality.  In terms of production capacity, Xinjiang has surpassed Yunnan to become the top silicon metal producer in China in 2015.

Addition of silicon capacity and construction of new self-owned power plants in Xinjiang face greater restrictions since 2018 as Xinjiang shifted its focus to high-level development.

As a total 2 million mt silicon metal capacity quotas were all issued in Xinjiang, large companies are mulling acquisition or replacement of unrealised quotas for their further expansion.

Besides capacity quotas, limitations on carbon emissions in each province will also be closely monitored.

A severe mismatch between the production capacity and carbon emission quotas has been seen across silicon production areas in China. 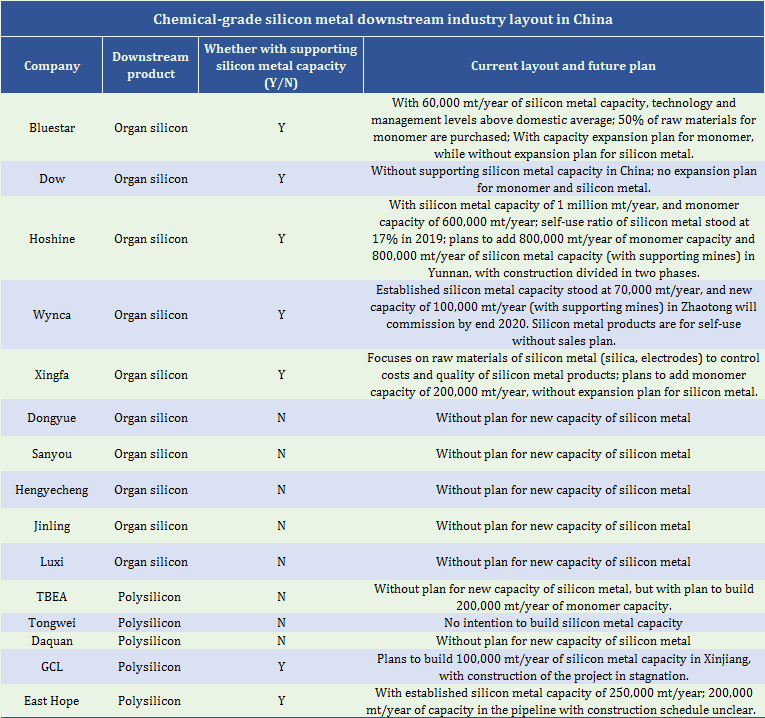 Operating rates of China silicon plants rallied to 33.3% in April as mills in south-west reopened
Resumption of production in Yunnan and Sichuan accounted for the rally in April’s operating rates. Silicon plants in Nujiang of Yunnan and Ngawa and Leshan of Sichuan reopened part of their capacity ahead of the arrival of rainy session, and this offset some capacity curtailment in Xinjiang and Chongqing due to losses and tight ore supply.

Operating rates of China silicon plants fell to fresh 4-year low in March
Last month, the capacity in operation reduced in Xinjiang, Sichuan and Shaanxi. Continued raw materials shortage kept major silicon plants in Xinjiang from resuming the capacity that has been shut down since February. Meanwhile, falling silicon prices prompted some medium-scale producers to cut output or undergo maintenance in the second half of March.