SHANGHAI, Dec 12 (SMM) – China’s production of hot-rolled coils and plates looks set to trend higher this month, as a slew of mills will recover from maintenance amid enticing profits.

An SMM survey showed that Chinese steelmakers plan to produce 9.29 million mt of hot-rolled coils and plates in December, up 4.75% from the realised output in November.

There are no maintenance scheduled for major hot-rolling mills this month, compared to about 429,200 mt of production affected by maintenance works in November.

Prices of spot hot-rolled coil (HRC) kicked off a rally since early November, as transport restrictions slowed shipments to spot markets and as Beijing’s economic stimulus measures and hopes for a preliminary US-China trade deal brightened the outlook for steel demand and improved market sentiment.

Some mills have shifted to rebar production, given the spread between profits on rebar and HRC. This, however, is not enough to lead to a decline in overall production of hot-rolled coils and plates.

The volume of production shift from HRC to rebar, however, may come in less than planned, given the narrowing rebar-HRC profit spreads.

Planned December production of hot-rolled coils and plates across this region will rise 5.06% from November to 4.97 million mt, as some mills recover from maintenance. About 145,000 mt is scheduled to be exported, up 18.95% from a month earlier.

This region sees just a small increase of 1.11% in planned production of hot-rolled coils and plates for December, as production ramp-up is partially offset by the shift to other products. This month’s scheduled output comes in at 2.89 million mt, with exports accounting for 260,000 mt, 0.38% less than the prior month.

Production recovery is likely to boost production of hot-rolled coils and plates across this region by 10% from November to 1.11 million mt. No cargoes will be exported.

Planned production of hot-rolled coils and plates across this region for December declines 3.61% month on month to 320,000 mt, as a mill will shift to rebar production. No cargoes will be exported. 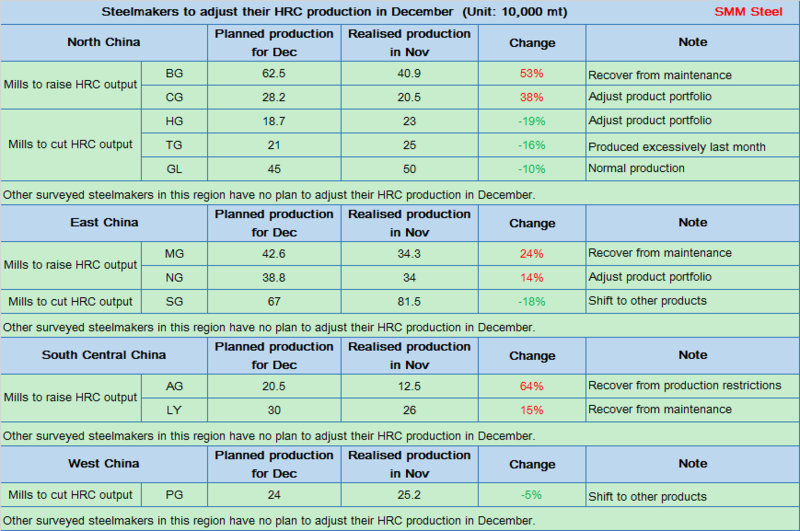