SHANGHAI, Nov 27 (SMM) – Indonesia, the top nickel ore exporter, has issued a new list of companies that have ongoing smelter projects and are allowed to export nickel ore. The move signifies an end to the inspections of ore export rules violations in late October which caused a temporary suspension of exports.

The document did not explicitly state that which companies are allowed to resume nickel ore export. But it was mentioned that miners that has nickel ore with less than 1.7% NI content, exporters that hold export permits (approved by the trade ministry) and valid export quotas (approved by the energy and mineral resources ministry) and smelter projects that passed official review are allowed to export nickel ore with less than 1.7% Ni content.

Companies on the list can resume nickel ore exports after they receive the green light from the energy and mineral resources ministry and Indonesian customs.

Chinese nickel ore importers are expected to see only about 60 vessels returning from Indonesia this month, with some vessels carrying no or fewer than originally planned nickel ore due to the sudden investigations.

While Indonesia has eased nickel ore exports, fears of unexpected disruptions prompted some Chinese importers to abort shipping nickel ore out of Indonesia before the export ban goes into effect. Only a few big traders plan to dispatch a small number of vessels to Indonesia, SMM learned.

China customs data showed that China imported 3.11 million mt of nickel ore from Indonesia in October, shrinking 6.2% month on month but soaring 130% year on year. Most imports of Indonesian nickel ore were high-grade materials even though Indonesia does not allow exports of ore with more than 1.7% Ni content. 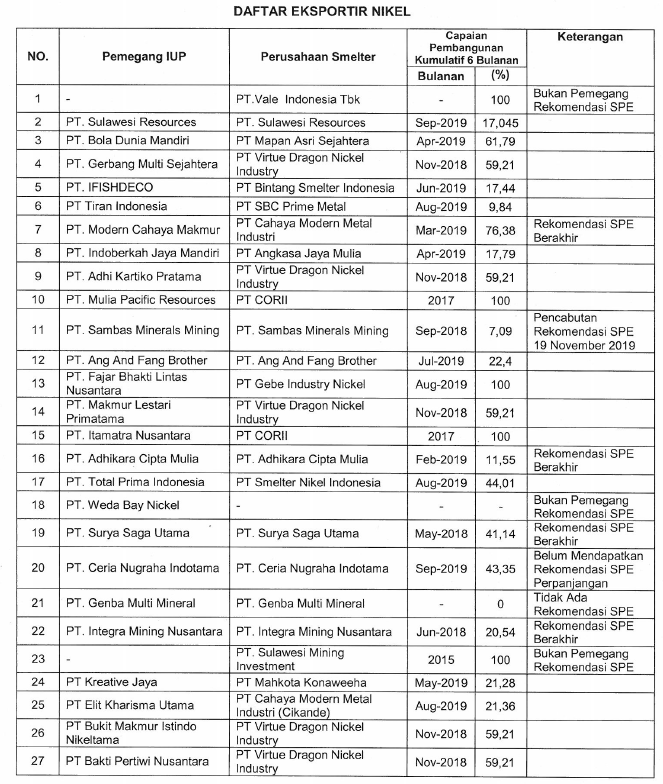 Philippines to ban entry to Northern Surigao for 2 weeks over COVID-19
The Philippines will ban vessels from entering Surigao del Norte from March 18 to the end of the month, growing concerns about nickel ore supply as the country is the world’s largest exporter of the raw material for stainless steel and nickel pig iron (NPI) following Indonesia’s export ban effective from this year. The ban, which has been signed, is aimed at preventing the spread of the COVID-19 pandemic, which has claimed 12 lives out of 140 confirmed infections in the Philippines.

China nickel ore imports fell for second month in November
China imported 5.99 million mt of nickel ore last month, down 12.5% from October but up 84.1% from November 2018