CST
Source:SMM
Exporters that comply with rules can resume shipments of nickel ore with a grade below 1.7%

SHANGHAI, Nov 11  (SMM) – Indonesia has lifted the temporary suspension on mineral ore export that was implemented two weeks ago and announced to stick to the 2020 deadline for the export ban.

Exporters that comply with rules can resume shipments of nickel ore with a grade below 1.65%, according to Maritime and Investment Coordinating Minister Luhut Pandjaitan. Some traders have already started exporting the mineral again.

The following nine companies are expected to be the first batch of miners resuming exports, according to sources. 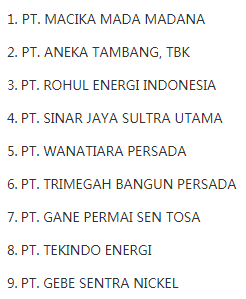 SMM expects the previously detained 50-60 vessels at Indonesian ports to recover their delivery in two or three batches.

Nickel ore shipments from Indonesia soared since September, after the country decided to bring forward a ban on mineral ore exports by two years from initially indicated 2022.

SMM Morning Comments (Nov 16): Shanghai base metals were mostly higher as a giant trade deal were signed
Nonferrous metals on the SHFE were mostly higher on Monday morning, and their counterparts on the LME rose across the board, as as 15 economies in Asia signed a deal that formed the world’s largest trade alliance.