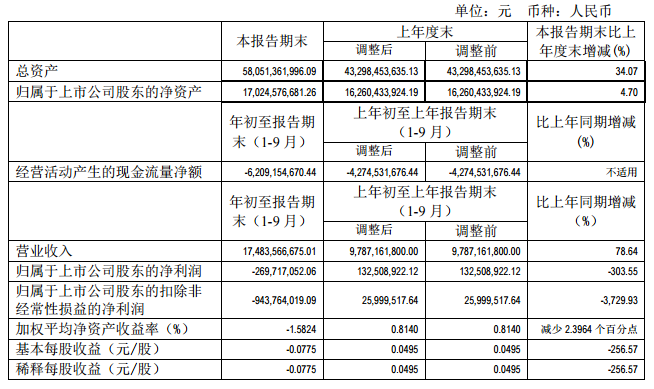 As for the sharp fall in profits, BAIC Blue Valley said that the conversion of profits to losses is mainly affected by the market downturn and subsidies.

BAIC Blue Valley said the steady growth in revenue was due to increased sales and restructuring of its subsidiary BAIC New Energy. Between January and September, BAIC's cumulative new energy sales reached 81678 vehicles, up 20.45 per cent from a year earlier, according to KuaiBao, production and sales in September released by BAIC Blue Valley.

BAIC Blue Valley achieved steady revenue growth in the third quarter, thanks in part to the steady growth in new energy sales of its subsidiary BAIC. BAIC sold 98382 vehicles in the first three quarters, up 20.45 per cent from a year earlier, according to public data. Among them, EU5 models accounted for the top sales of pure electric segment for five months in a row, with cumulative sales of 67750 vehicles in the first three quarters of this year, accounting for about 83 per cent of BAIC's overall sales of new energy. In terms of product structure adjustment, the main products of BAIC New Energy have been adjusted from EC series to high-end pure electric model EU series. BAIC new energy general manager Ma Fanglie previously given data show that BAIC new energy A0 class or above models account for 80%, the average price of more than 120000, revenue growth is much higher than sales growth.

On October 15 this year, BAIC Group's BEIJING brand (BAIC New Energy and BAIC Shanbao integration) officially landed, the future will be mainly responsible for the production and sales of high-end products, which also has a certain role in promoting the revenue of BAIC Blue Valley.

Shanghai colored net (SMM) annual meeting is the annual event of the metal industry, with an annual participation scale of thousands of people, domestic and foreign metal industry people gathered together to review and summarize the experience and harvest of the year, and lay the groundwork for the production, operation and operation of the coming year.

This year's "2019 China Nonferrous Metals Industry Annual meeting and 2020 (SMM) Metal Price Forecast Conference" was jointly created by SMM and China Renewable Resources Industry Technology Innovation Strategic Alliance and Shanghai Nonferrous Metals Industry Association. At the same time, the first "China Renewable Metals Industry chain Development Summit Forum" was held, and SMM metal price forecasting conference and waste battery recycling exchange were set up for you to enjoy. From the development of non-ferrous metal market to the recycling of renewable resources, from the detailed explanation of policies and systems to the research and development of industrial chain technology.

This is not only a meeting, but also a brainstorm for the industry to exchange information and collide with the spark of thinking!