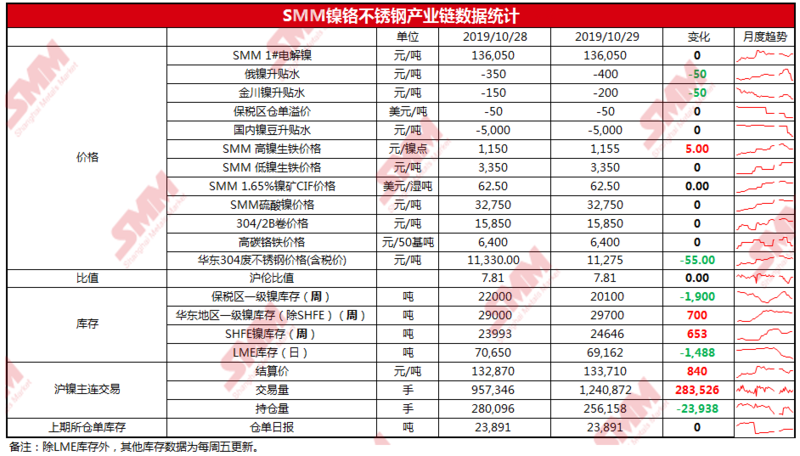 Spot: on October 29, Russian nickel compared with Shanghai nickel 1911 discount 1911 to discount 300, Jinchuan nickel than Shanghai nickel 1911 contract generally reported discount 1911 to 1911 yuan / ton, the discount is slightly larger than yesterday. First, because the Shanghai Nickel 1911 and Shanghai Nickel 1912 contracts are still large, about 3000 yuan / ton, the holders have postponed the backward movement of the contract, try to point the price on the Shanghai Nickel contract 1911, and second, the price has rebounded, the transaction is relatively weak, and the market demand is on the low side. In the morning, Shanghai nickel rebounded after a brief consolidation around 136000, once high in the middle near 140000, although the holder actively shipped, but the actual demand is weak, the transaction is general. The ex-factory price of Jinchuan Company is 137600 yuan / ton, 2100 yuan / ton higher than yesterday. Nickel prices fell back in the afternoon, giving up all the gains, while downstream transactions did not improve.

Nickel pig iron: according to foreign media, Indonesia's large stainless steel plant plans to reduce nickel pig iron production by 20% in November, mainly due to a shortage of nickel mines after the start of the rainy season in Indonesia, in order to maintain a certain level of nickel ore reservoirs. According to SMM, it was confirmed by relevant sources of the company that there was such a plan in November. The company produced about 180000 metal tons of nickel pig iron this month, which would affect about 36000 metal tons if it were to cut production as planned.