CST
translation
Source:SMM
After trading opened today, spot water jumped to around 100 yuan per ton. SMM browsed historical data from the database and found that the last time the water rose more than 100 in 2019 was the period of VAT reform at the end of March. Why did East China aluminum ingots rise to more than a hundred water in a short period of time this week?

In the process of daily tracking spot transactions in the East China market, SMM found that the recent spot rise in East China aluminum ingots has increased considerably. At the beginning of last week, the spot rise was still around 10-30 yuan / ton for the same month. Although the current month contract on Wednesday was changed to the 1911 contract, the spot rose somewhat, but remained at a stable level around 30-40 yuan / ton. However, after the opening of trading today, the spot rose to around 100 yuan / ton. SMM looked at historical data from the database and found that the last time it rose more than 100 in 2019 was the period of VAT reform at the end of March. Why did East China aluminum ingots rise to more than a hundred water in a short period of time this week? 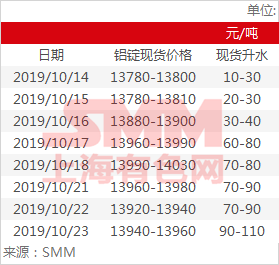 The influence of issuing factors. According to the announcement of the Shanghai and Wuxi Taxation Bureau, the Inland Revenue Bureau will upgrade the VAT invoice management system from 00: 00 on October 25, 2019 to 24:00 on October 31, 2019, during which the relevant system will be shut down and some of the businesses associated with VAT invoice will be suspended. Because traders need to carry tickets in the process of receiving and shipping, they need to complete some necessary financial settlement and complete some business ahead of time, such as the delivery of long orders, so that the market is prone to more and less, spot supply does not meet the natural rising demand.

In the context of continuous decline in inventory, Shandong, Xinjiang and other aluminum plants slow resumption of production, Guangxi, Yunnan and other places new production capacity is slow to put into production, SMM believes that the medium-term inventory will maintain the pace of storage, so the market for tight spot expectations to stimulate the spot rose more than 100. From the point of view of the late water rise changes, we expect that the short-term water rise will be difficult to return to the level near 10-30 yuan / ton, but we still need to pay attention to the changes in supply and demand, and SMM will continue to follow up the report.