SMM10, March 10: it was recently reported that, DMCI Holdings had lifted the suspension order from nickel miner Zambales Diversified Metals on Thursday in a regulatory filing that the Philippine Ministry of Environment and Natural Resources had lifted. Zambales Diversified Metals is a subsidiary of DMCI Mining and is owned by DMCI Holdings. Several Filipino miners, including Zambales Diversified and Berong Nickel, two nickel mining companies owned by DMCI Mining, were suspended or shut down after the Philippine government conducted a series of audits of the industry's compliance with environmental regulations.

The Ministry of Environment and Natural Resources lifted the moratorium on Berong Nickel last November. The Berong and Zambales mines have accounted for less than 5 per cent of national production in recent years. There are more than 30 nickel ore producers in the Philippines. The Philippines became the world's second-largest producer of nickel ore in 2018, while China, the number one buyer of nickel ore, is expected to rely on Philippine supplies, which will replace Indonesia, last year's largest producer. Indonesia will impose a ban on ore exports in 2020.

According to SMM, Zambales Diversified Metals is located in the Zambales area and mainly produces nickel ore, which is the rainy season from June to the end of October each year, during which the mine cannot be mined and shipped. 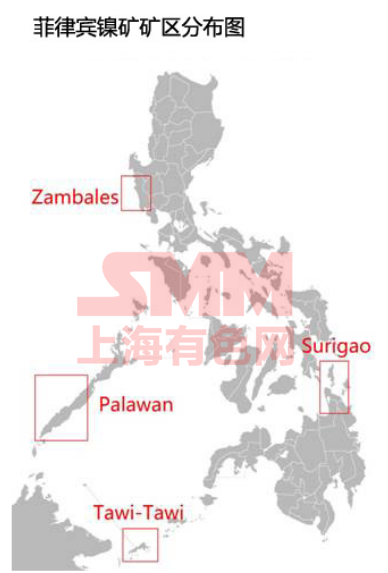 In July 2016, the Philippine government announced that Zambales Diversified Metals had suspended operations because of illegal environmental regulations and stopped issuing mining permits. But, Zambales Diversified Metals did not ship much until the mine stopped operating. According to SMM, the mine exported about 220000 wet tons of nickel in 2014, no nickel in 2015 and about 100000 wet tons in 2016, accounting for less than 0.5 per cent of the Philippines' annual exports.