5G plate performance is strong, as of the close, Shuobeid, to pure technology, Skyworth digital cap rose by the limit, the new easy Sheng, move away communications and other stocks led the rise. As of about 9:30 on October 9, the number of 5G subscribers of China Mobile, China Unicom and China Telecom had reached 5.9226 million, 2.0033 million and 2.0784 million respectively, totaling more than 10 million. 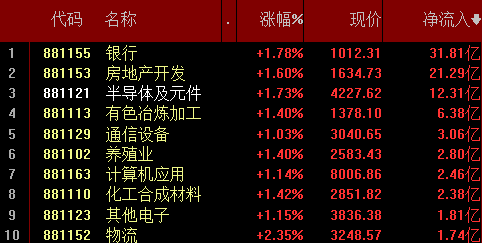 The concept of CBA rose, Qingdao Shuangxing, Xunxing shares and Yuehongyuan A rose by the limit.

Chicken plate pulled up, probiotics shares rose more than 6%, Xiantan shares, Minhe shares, Shengnong development and so on have strengthened one after another

The concept of liquor has fallen, and the liquor industry has fallen by more than 4%. Jinhui wine, Yingkai tribute wine, old white dry wine and so on have weakened one after another.

Honggao creativity, golden mantis, new material of the times, Su ao sensor, digital authentication, Xinnong shares and other shares flash in the morning, but the wisdom of yesterday's flash fell by the limit at the start of trading today.

A spokesman for the Ministry of Commerce said: we note that the US Department of Commerce has added 28 Chinese entities to the export control "entity list" and will continue to monitor the situation. For a long time, the US side has frequently imposed unilateral sanctions on Chinese entities in accordance with its domestic law, and this time, under the guise of human rights, 28 Chinese local government agencies and Chinese enterprises have been included in the "list of entities" to impose sanctions, and take the opportunity to slander China's policy of governing Xinjiang and rudely interfere in China's internal affairs. China expresses its strong dissatisfaction and firm opposition to this. We strongly urge the US side to immediately stop gossiping on the Xinjiang issue, stop interfering in China's internal affairs, and remove the relevant Chinese entities from the "list of entities" as soon as possible. China will also take all necessary measures to resolutely safeguard China's own interests. (website of the Ministry of Commerce)

The reporter learned from many departments that in addition to reducing fees and taxes and reducing the central bank's overall accuracy this year, in order to cope with the downward pressure on the economy, various counter-cyclical adjustment measures have come out of the stage one after another. In the coming fourth quarter, departments will also introduce a number of policy measures, including the promotion of consumption and other blockbuster policies to be expected. The National Development and Reform Commission and other departments have previously done intensive research and policy groundwork to promote consumption, with some policies focusing on tourism and cultural consumption, such as repeated visits to Hainan to do research on the adjustment of the tax exemption policy on outlying islands.

It took 30 years to open and close the door of China, but it only took 3 days! CCTV and Tencent suspend NBA preseason broadcast]

In 2002, Yao Ming joined the Rockets as the No. 1 player, which promoted the rapid development of NBA in China. The story of David Stern, a former president of the NBA Alliance, who waited for an hour outside the CCTV gate in 1989 just to provide a free recording signal, is still impressive. But today, NBA's fortunes in China are turning sharply. Because of the improper remarks of Rockets General Manager Mo Lei, on October 8, CCTV Sports Channel and Tencent Sports announced that they would immediately suspend the broadcast of the NBA preseason (China match). This means that all NBA television and Internet broadcasts in China have been suspended. (daily Economic News)

China Merchants Securities said that from the general direction, technology is still in the upward cycle process, the medium term is still optimistic about the excess returns of the science and technology sector. Configuration to grasp two main lines: one is undervalued performance-to-price ratio, safety margin, low position, "stagflation" plate, can pay attention to the head of finance (banking, brokerage, insurance); the other is the growth of science and technology to represent the major innovation direction, such as TMT (independent controllable, Huawei industry chain, 5G), high-end manufacturing (new energy vehicles, photovoltaic wind power, military industry), science and technology ETF.

Galaxy Securities: the basis of the bull market is not solid in the fourth quarter of 2019 and will have to wait. Short-term allocation thinking: the overall trend in the fourth quarter is often the first three quarters relative stagflation industry performance. In the short term, companies with lower valuations and stable performance, such as big real estate and bank stocks with high reserve ratios, have better opportunities. Long-term allocation ideas: first, if the market adjustment, select high prosperity or high profitability of high-quality assets, computer communications semiconductors, such as 5G deterministic growth sub-industry (copper clad laminate, circuit board), high-end liquor, vaccine biological products, insurance, innovative drugs and R & D services and other industries; second, bargain allocation, such as securities and broad securities market-related sectors; Third, block chain, digital currency and other themes, fluctuating greatly, it is more difficult to find companies with high performance. Fourth, a performance forecast will begin in October, with the possibility of new mines, and it is recommended that demining should continue.

Shanxi Securities pointed out that looking forward to the future, the short-term shock pattern continues. After the continuous correction of the two cities, the index gradually formed a supporting platform near the 60-day line; from the liquidity point of view, the funds after the festival are expected to return, and the liquidity contraction caused by the holiday effect is expected to be repaired; from the performance forecast, the performance of different sectors of A shares is obviously divided, and the structural market is still expected to continue.

Northeast Securities: there is still great uncertainty in the external environment; considering that the performance of the three quarters is expected to be weak and the performance of the annual report is improved due to the reasons of the base, and considering that many deviant rate indicators are oversold under the stock game, therefore, the late market responded with a neutral but not overly pessimistic approach. The overnight outer plate fell about 1 per cent, the A50 index fell 0.6 per cent and other factors. Prudent investors are mainly defensive in the short term, and several technical scenarios can be considered at the time of intervention: the index falls below 2870 points or the bottom of a single needle or the volume can shrink to more than 300 billion, and the proportion of financing bid purchases falls below 7 per cent again (7.3 per cent the day before) or when there is a relatively positive signal on the information surface after October 15. Prior to this, control positions, tend to undervalue plate and technology plate equilibrium allocation.

Guotai Junan Securities: a shares have been fully priced external risk, the market is expected to rebound after the festival

A shares have fully priced the external risk of National Day, the market is expected to rebound after the festival. Over the past 20 years, the average rise from the opening of the National Day to October 15 was positive and the probability of rise was 65%, but the average gain in October was negative. The performance of A shares showed momentum effect in October, and the post-festival performance continued the trend of September and the end of September. In history, the performance of Hong Kong stocks and US stocks during the National Day period has a great impact on post-festival A shares. Taking into account the overall improvement in September A shares, full adjustment before the festival, the market during the rest of the decline is limited, A shares are expected to rebound after the festival.