SMM10, October 9: October 8, the first day after the National Day, Shanghai and tin opened lower, but rebounded in the afternoon, the next day (October 9), Shanghai tin continued to rise, closing at 136930 yuan / ton, up 1.8%. 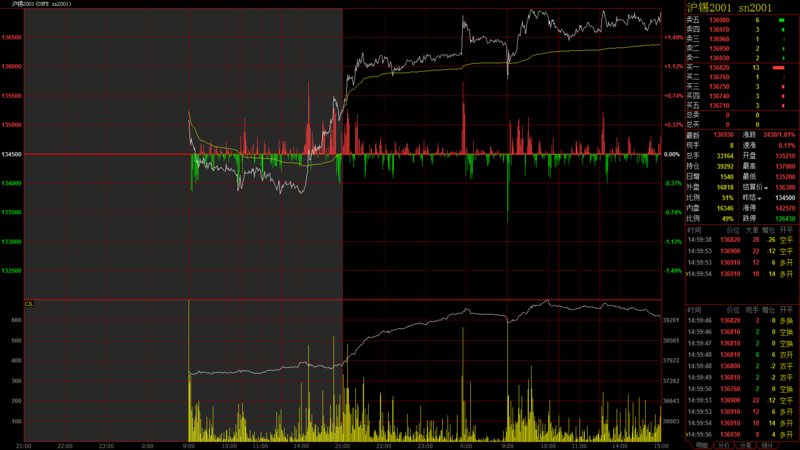 Since September, Shanghai tin has experienced a process of continuous uplift and slow decline. On September 5, tin shares issued an announcement saying that in order to respond positively to the joint production reduction initiative of Chinese tin industry enterprises, to cope with the shortage of raw material supply and other industry conditions faced by the tin industry, and to achieve the sustained and healthy development of China's tin industry, Yunnan Tin Co., Ltd. will implement a reduction in production. In 2019, the company's refined tin production is expected to be about 10% lower than the annual production plan. In addition, according to the International Tin Association, representatives of key tin industry enterprises reached an agreement to reduce production at the meeting: "Chinese tin smelters will jointly reduce production by 20200 tons, and PT Timah (Persero) Tbk (Indonesia Tianma, the world's leading supplier of refined tin, also said that it will reduce production by more than 10, 000 tons. According to the consensus reached at the meeting, subsequent global refined tin supply will cut production by more than 30200 tons, accounting for about 10 per cent of global annual production. Enterprises also said that in addition to the necessary production reduction measures currently taken, they should take the initiative to strictly control new production capacity, eliminate backward production capacity, pay attention to environmental protection and self-discipline, and promote the upgrading of production capacity in the industry. " On October 8, due to the double influence of long and short forces and the driving effect of Shanghai nickel trend, Shanghai tin first suppressed and then rose. Today, the center of gravity of bulls in Shanghai has moved up sharply, and as of the close, the price of tin in Shanghai was 136930 yuan / ton, with the overall pressure on the previous platform 136000138000 yuan / ton, while the lower part of the entity was supported by the 40-60 day moving average. On the other hand, there is a jump gap above the upper rail of 138000 yuan / ton in the early stage, and if the tin in Shanghai goes up further to 138000 yuan / ton, the pressure will be blocked. From the index point of view, the daily line level KDJ index has formed a golden fork and shows an upward trend, the MACD index fast and slow line is still above the zero axis, and the K line is near the middle rail of Brin channel. SMM expects Shanghai tin to remain volatile and stable in the next few trading days of the week. It is expected that during the week, the lower support of Shanghai tin is located near the 40-60 daily moving average of 135000 yuan / ton, and the upper resistance is near the previous platform high of 138000 yuan / ton.

In the first half of 2019, the supply at the end of the mine remained in a tight equilibrium state. Under the influence of China's overall economic situation and the factors of the Sino-US trade war, market demand has declined compared with the same period last year, the process of de-inventory in the market has been slow, and the tin city as a whole has maintained a state of weak supply and demand. On the outside side, Indonesian tin ingot exports rose 43 per cent in April from a year earlier, coupled with a sharp increase in Chinese refined tin exports from January to April. At one point, the inventory of Lunxi rose to 6305 tons, and the trend of Lunxi was under pressure. Where will tin prices go in the future? Will the continued decline in tin prices affect the enthusiasm of miners to ship goods, thus aggravating the pattern of tight supply at the end of the mine? When will downstream demand recover? Will the development of 5G become a new growth point of tin demand? The 2019 (9th) Tin Industry chain Trading Summit invites you to explore the mysteries of Tin City. "Click to sign up for this summit.

Thursday, November 7th, in the afternoon.

Analysis on the present situation and Technical Application Development trend of 09: 00-09: 40 Solder Industry

Application Progress of Tin anode Materials for Lithium Ion Battery from 09: 40 to 10: 20

Consumption and Investment Prospect of Tin in Semiconductor Industry from 10: 20 to 11: 00

Closing of the General Assembly