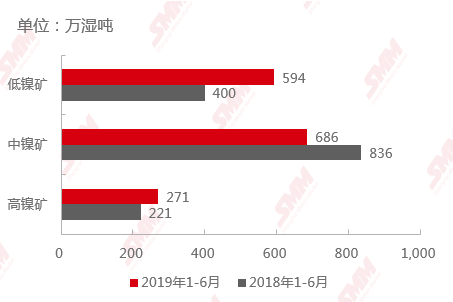 Proportion of taste in imported Filipino nickel ores from China From January to June 2019, China imported 12.38 million wet tons of Indonesian laterite nickel ore, an increase of 32 per cent over the same period last year and 20 per cent from the second half of 2018, of which 97 per cent was high nickel ore.

The increase in exports coincided with the increase in Indonesian export quotas. According to SMM data, as of July 24, 2019, the effective export quota is 29.79 million wet tons, and at present in the shipment of mines, with the exception of PT Adhikara Cipta Mulia suspended shipment due to mine formalities, the rest of the normal shipment. 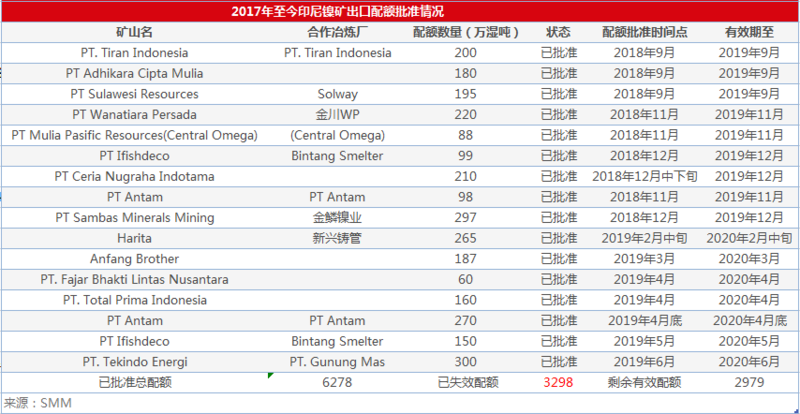 Similarly, at the same rate of increase as in the first half of the year (32 per cent year-on-year), China's imports of Indonesian laterite nickel mines for the whole of 2019 are expected to be 26 million wet tons, below the previous SMM forecast of 2 700-28 million wet tons. The main reason is that after the nickel mine export quota expires this year, the examination and approval has become stricter, and the quota of some mining enterprises whose construction progress of smelting projects is not up to standard has shrunk or the approval of new quotas has been repeatedly delayed, such as Fajar and Macika.

Of course, given that there are still more export quotas applied for, there is still a high probability that China's imports of Indonesian nickel mines will increase year-on-year in the second half of the year compared with the first half of the year.

Supply and demand balance of nickel mines in China

To sum up, SMM expects China's laterite nickel mine to remain in oversupply for the whole of 2019, with an excess of about 60, 000 metal tons.