June is the end of the transition period for new energy subsidies, but given that the "rush to load" signal was released at the beginning of the year and the "National five" inventory vehicles squeezed sales of new energy vehicles in June, the installed capacity this month exceeded expectations compared with the same period. This shows that the impact of market policy on the industry is still strong. Recently, the release of the "double points solicitation draft", as an extension of the new energy subsidy policy, has pointed out the strategic direction for the development of the follow-up market and is beneficial to the development of the new energy vehicle industry from the supply side.

The policy stimulus is still obvious in the car companies.

From the monthly new energy vehicle production and sales difference data chart (monthly new energy vehicle production data minus sales data), we can see that the 2018 "rush" period is obviously concentrated before the end of the transition period, that is, April-May; In 2019, we have also analyzed many times before, due to the industry expected subsidy retreat time forward, "rush" time appeared once at the beginning of the year, after entering the second quarter, because the demand is squeezed by the "national five" inventory vehicles, and the new energy subsidy retreat caused by the downward pressure on the industrial chain, the industrial chain is mostly in a wait-and-see state, and the market is relatively depressed. As June is the last month before the end of the transition period, the "rush to install" also directly reflects the impact of the policy on the market is still in.

As a result of entering July, affected by the subsidy slope, the mainframe factory will have some models planned to adjust the price, and the high temperature leave of the mainframe factory in July and August will affect the production progress. It is expected that in the third quarter, the industrial chain will be dominated by de-inventory, and the overall market situation will continue to be depressed.

The month-on-month growth rate of battery installation is not as fast as that of new energy vehicles, passenger cars, bicycles, and the carrying capacity of bicycles has dropped sharply.

The power carrying capacity of bus bicycle decreased greatly, mainly due to the obvious reduction in the output of Shenwo bus with 351KWh and Yutong bus with 345KWh.

In terms of mileage, BYD's all-electric passenger cars have the highest mileage, reaching 520km, among the batteries installed this month.

In terms of energy density, the highest system energy density of the installed batteries this month reached 170Wh / kg, which is the ternary battery carried by Guangqi in Ningde era.

Let's take a look at the market share of power batteries in June. In the past two months, BYD's market share of installed power batteries has continued to decline, mainly affected by the reduction of its special purpose vehicles. BYD produced 793 special-purpose vehicles in May, down 54.2% from a month earlier to 363 in June. At the same time, compared with the Ningde era, bicycles carry less electricity.

According to SMM statistics, in June 2019, China's total output of ternary materials was 15725 tons, an increase of 32.6 percent over the same period last year and a decrease of 23.3 percent from the previous month, the biggest drop since 2018.

Affected by the production reduction of ternary batteries in leading battery factories such as Ningde era and BYD, manufacturers in Tianjin, Hunan, Guizhou and other regions have reduced their orders, and there has been a significant reduction in production in June, in which the production of 5-series and 6-series single crystal products is mainly reduced. At present, the total production capacity of ternary materials has exceeded 420000 tons, the situation of overcapacity is obvious, and the competition among market participants is fierce. At the same time, with the leading effect trend of downstream battery factories, the customer structure is gradually concentrated. Once downstream battery customers show a large-scale production reduction, if the upstream raw material production plan is not adjusted in time, inventory will rise rapidly and passively in a short period of time. Considering that the raw material nickel, cobalt and lithium prices are in the downward channel, the material factory is not willing to keep more inventory, and is still aimed at active shipment. Therefore, once the terminal demand is less than the expected risk, the material factory has a strong willingness to reduce the opening rate. 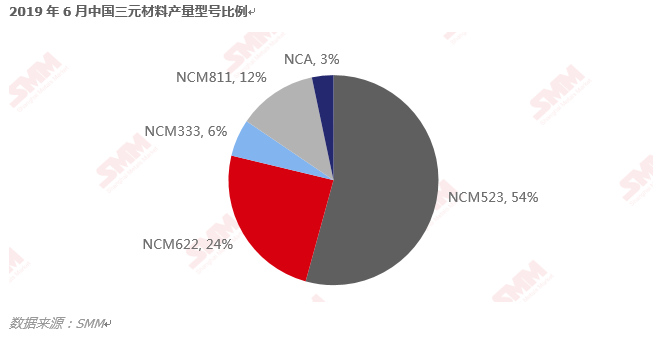 Recently, the "whitelist" of power batteries has been officially cancelled, which has undoubtedly opened the door for foreign battery enterprises to enter China. At present, the products of Japanese and Korean enterprises represented by Panasonic, LG, Samsung SDI and SKI are mainly composed of 6 series and high nickel. For domestic battery factories, in the face of the upcoming international competition, it is the only way to develop high nickel technology to upgrade the performance structure of products. However, the development of technology is by no means overnight. If it is blindly promoted, it will pose a threat to the safety of new energy vehicles. In the first half of the year, whether the energy density requirement of the new energy subsidy policy in 2019 was not raised, or the Ministry of Industry and Information Technology carried out investigation on the hidden safety risks of the mainframe plant, it shows that the importance of safety has always been put in the first place. SMM expects that the output of high nickel ternary materials will increase steadily with the entry of foreign batteries and the strategic adjustment of leading battery factories in the second half of the year, but the growth space is limited, and the product structure of ternary materials will still be 5 series and 6 series.

In June 2019, China's total production of lithium iron phosphate was 6180 tons, an increase of 28.5 percent over the same period last year and a decrease of 27.4 percent from the previous month. Affected by the recession in the new energy vehicle market, the leading battery factory reduced the production line of all types of batteries "equally" in June. Lithium iron phosphate battery market in 2018 has experienced a round of reshuffle, the concentration of market participants, corresponding to the upstream cathode material manufacturers are also obvious. At present, lithium iron phosphate is mainly used in the power market, because the energy storage market is still in the early stage of development, the support for market demand is limited. Once the leading battery plant has a large-scale reduction in production, affected by the higher concentration of the industry, the overall decline of lithium iron phosphate will be higher than that of ternary materials.

In June 2019, as a result of entering the traditional off-season of consumer batteries, demand for lithium manganate was reduced. The total output of lithium manganate in China was 4900 tons, an increase of 7.9 percent over the same period last year and a decrease of 8.6 percent from the previous month. SMM believes that the future consumer market, electric bicycles and electric tools market performance is good, the demand is more optimistic; power market, affected by the decline of subsidies, the follow-up power market or in order to reduce costs and improve battery stability, lithium manganate will be used for doping with ternary materials. As the lithium manganate market is more mature, the product structure is stable and there are many market participants, the periodicity of monthly output is more obvious, and the demand structure will be optimized in the future.