In May, it was due to continued weak demand in terminal industries such as cars and household appliances (1.8483 million vehicles in May,-10 per cent month-on-month,-21 per cent year-on-year. And according to the China Automobile Association, passenger car sales in June were 1.73 million, year-on-year-7.8%; car sales in China in June were 2.06 million,-9.6% year-on-year;), as a result, the cold rolling order of steel mills gradually weakened, and the spot price of cold rolling continued to fall, so the cold and hot price difference continued to shrink (the normal cold and hot price difference was about 400 yuan / ton), and the cold rolling production profit of steel mills gradually decreased (the current cold rolling profit is-1000 yuan / ton). Therefore, in the case of cold rolling is not profitable, and the hot rolling profit is relatively considerable (hot rolling profit 100 to 250 yuan / ton), the steel mill has no choice but to gradually reduce the production of cold rolling and increase the production of hot rolling, and the cold and heat transfer operation continues to increase in the off-season in July. 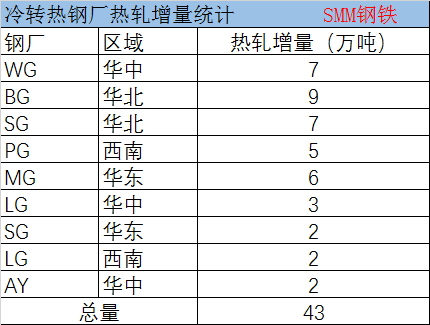 According to the research feedback of SMM mainstream sample steel mills, the current conversion of steel mills leads to an increase of hot rolling supply of about 430000 tons. And the steel mill said that it is difficult to improve the order situation in the short term, so it is not optimistic about the recovery of the cold and hot price difference in the later period, and the probability is still maintained at 200 to 300 yuan / ton, so the conversion operation will continue, resulting in some pressure on the supply of hot coil. But in this case, today Baosteel released the August price policy, raising the price of a variety of products, in order to boost market confidence. Therefore, although the rest of the steel mills said that it is more difficult to follow the rise, there is still a good chance to maintain a flat tone, but Baosteel as a plate leading steel mill price policy does have a stimulating effect, so it is expected that the short-term spot price will be in a narrow range of volatility. In addition, Tangshan environmental protection production restrictions are indeed strict, so when the late production restrictions are gradually reflected in the market, hot coil spot prices will still have upward momentum. [SMM Steel]

Report: China’s Steel Cuts in 2016 Were Fake, Capacity Actually Went Up
China announced last year it had implemented ambitious cuts in steel capacity. Now, a new report says that not only did those cuts not happen, but China actually increased steel production capacity.