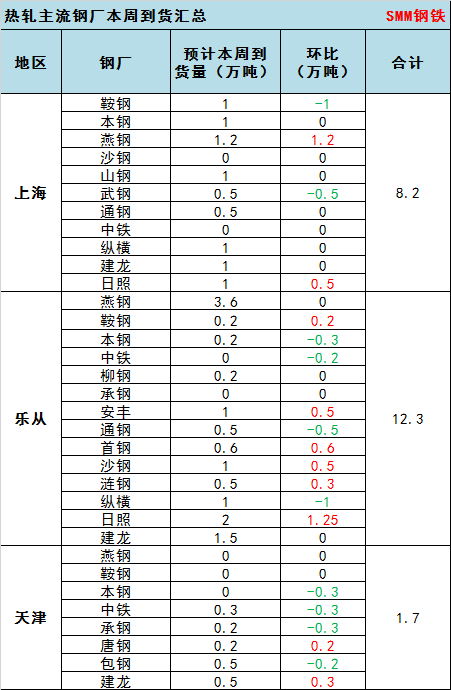 The total amount of resources received by the mainstream hot rolling mills this week was 222000 tons, compared with 212500 tons + 9500 tons last week, the overall resource arrival continued to increase, and mainly concentrated in the Lesong area. Mainly because, in the middle and late June, the basis difference continued to converge, resulting in more active speculative trade, so orders from steel mills increased, so under the influence of the arrival cycle, the arrival of resources this week is still an early order, so the arrival of some mainstream market resources has increased. Since February and June, driven by cold and hot rolling profits, steel mills have gradually reduced production, cold rolling and increased hot rolling (as of the current conversion, the increase in hot rolling has reached about 350000 tons, of which more resources have been sent to South China). This has led to an increase in the additional investment of hot rolling mills in the market. In addition, due to the continued lack of terminal demand, the steel mills, which accounted for a large proportion of the terminal production in the early stage, turned to increase the market launch, and gradually reflected by this week.

[Shanghai Market] Resources arrived at 82000 tons this week, compared with 80, 000 tons + 2000 tons last week. The overall resource arrival situation is relatively stable, in the case of continuous inventory accumulation and weak actual demand, the market continues to be under pressure. Among them, the main resources are Angang, Bengang and Yangang. At the same time, according to the feedback of traders, the late arrival of resources is still dominated by Changxie, so in Tangshan environmental protection production restrictions have not been reflected in the market, it is expected that the goods will arrive next week or maintain a stable state.

[happy from the market] Resources arrived at 123000 tons this week, compared with 109500 tons + 13000 tons last week. This week, the arrival of resources continues to increase, and the growth rate is larger, in the case of making up for the previous shortage specifications, the overall arrival of goods will still cause greater pressure on the market. Among them, the arrival of resources is mainly to Yangang, Jianlong, Rizhao, Shougang increased additional delivery. At the same time, according to the feedback of traders, as there are fewer ships transported in Letong port, more spot resources are still waiting for barges in Guangzhou port, so it is expected that the arrival of resources will continue to increase next week.

[Tianjin Market] Resources arrived at 1.7 tons this week, compared with 23000 tons to 6000 tons last week. The overall resource arrival is still relatively small, so although it is still in the poor demand stage, but the pressure on the market is relatively small. Among them, the main resources are China Railway, Baotou Steel and Jianlong. At the same time, according to the feedback of traders, due to the impact of Tangshan environmental protection production restrictions are more obvious, so it is expected that the late arrival of resources is still on the low side.

However, it is worth noting that although some mainstream steel mills have increased their planned hot rolling production this month, they have hedged some of the Tangshan environmental protection and reduced production. However, on the whole, the intensity of environmental protection and production restrictions in Tangshan has indeed increased, affecting the output in the late July or will be gradually reflected in the market, so the sub-region, it is expected that the late arrival of resources will be reduced to varying degrees. [SMM]