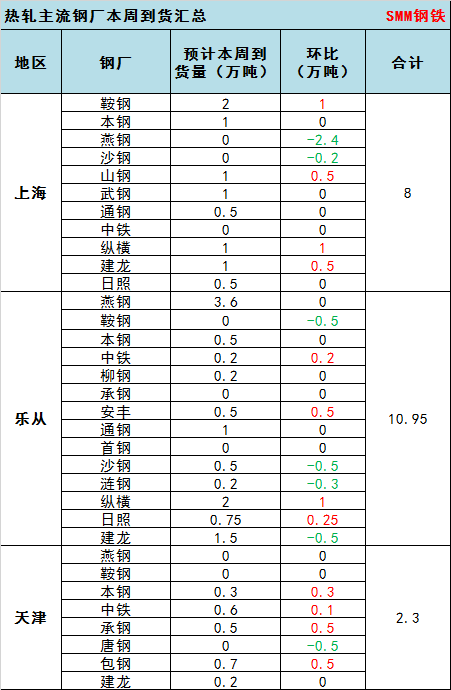 First, due to the impact of the cargo cycle, the current arrival of resources is mostly ordered in mid-June. The spot price in mid-June is basically in the lowest position in this round, so the factory price of price-locked steel mills is lower, so some traders will choose to build positions at this time. Second, in the middle and late June, the current base difference gradually shrank, resulting in the gradual activity of speculative trade, leading to a slight improvement in market transactions, coupled with the fact that there are more spot out-of-stock specifications in the market, so the ordering sentiment of traders has rebounded.

Therefore, on the whole, orders from traders increased in mid-June, resulting in an increase in the arrival of mainstream market resources this week. However, it is worth noting that at the end of June, due to the convergence of the basis difference in the hot roll period, speculative trade was more active, so orders from steel mills increased, so under the influence of the arrival cycle, it is expected that the arrival of mainstream market resources will continue to increase in mid-July. In addition, the reduction in hot coil supply caused by Tangshan environmental production restrictions will gradually be reflected in the market in late July, so it is expected that the arrival of resources may be reduced in late July. Among them,

[Shanghai Market] Resources arrived at 80, 000 tons this week, compared with 76000 tons + 4000 tons last week. Due to the recent easing of Sino-US trade negotiations and Tangshan environmental production restrictions, spot prices fluctuated greatly, so speculative trade sentiment also fell back, so the overall market demand is poor, coupled with the increase in the arrival of resources, resulting in the gradual accumulation of market inventories (last week's inventory of 367700 tons, month-on-month + 6.3%, year-on-year + 4.4%), so the market pressure is greater. Among them, the main resources are Angang, Bengang and WISCO.

[happy from the market] Resources arrived at 109500 tons this week, compared with 108000 tons + 1500 tons last week. Due to the recent continuous rainfall in the region, affecting terminal procurement, so in the early market resources are difficult to digest and in a state of accumulation (this week's inventory of 397200 tons, month-on-month + 4.3 per cent), the arrival of resources this week will continue to increase, will cause greater pressure on the market. Among them, the arrival of resources is mainly Yangang, Jianlong, vertical and horizontal.

[Tianjin Market] the resources arrived this week 2.3t, compared with the previous week 14000 tons + 9000 tons. Although the arrival of resources this week has increased or decreased, but due to the continuous decline in pre-resources, so there is no pressure on the market. Among them, the main resources are China Railway, Baotou Steel and Chenggang. [SMM Steel]