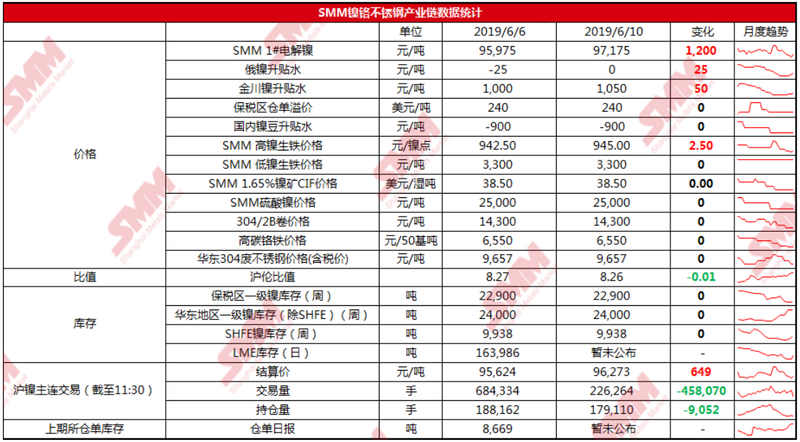 Spot: in the morning, Russian nickel is generally flat compared with Wuxi 1906, and individual traders offer a discount of 50 yuan per ton, but the source of goods is not much. Compared with Wuxi 1906 contract, Jinchuan nickel generally reported a water rise of 1000 yuan to 1, 100 yuan per ton. On Monday, the market price rebounded, traders feedback transaction is light, mainly due to the absolute price rise led to downstream procurement caution, and last week downstream has been actively stocked, there is still inventory consumption. In the early trading session, before the price rose sharply, there were a small number of transactions. As the price continues to rebound, the transaction becomes worse, but the holder is basically dominated by rising water. The mainstream transaction is 96600 to 97700 yuan / ton.

Early trading: Lenniya opened at $11810 a tonne today, with its center of gravity fluctuating within a narrow range around the daily average at the start of the day. At noon, the center of gravity of nickel was arranged horizontally near $11800 per ton. In the afternoon, supported by the fall in the dollar, nickel rallied, rising $11855 a tonne and then reversing its decline, giving up all its gains. LME nickel stocks rose 5136 tons, the biggest increase in a year. Or affected by inventory data, into Europe, nickel fell below the $11800 / ton mark, down $11780 / ton low. Subsequently, the nickel rallied to repair, bearing a pressure of $11800 / ton first-line narrow range of concussion. At night, nickel fell to $11705 a tonne, the lowest in nearly four months, as crude oil stocks soared and crude oil fell and the dollar rose. It closed at $11715 a ton. Positions increased by 1700 to 234000 and trading volume increased by 645 to 9596.

Overnight Shanghai nickel 1907 opened at 96300 yuan / ton, at the beginning of the plate, by 96300 yuan / ton first-line support, pressure daily moving average slightly concussion. Subsequently, affected by the fall in crude oil and the upward US dollar, Shanghai nickel fell below the support line all the way down, falling below the previous low of 95250 yuan per ton to close at 95380 yuan per ton. Trading volume increased by 198000 hands to 420000 hands, and position volume increased by 10300 hands to 192000 hands.

Crude oil stocks rose 6.771 million tons to the highest level since July 2017, while overall US oil stocks rose to the highest level since 1990, according to data released by the US Energy Information Administration (EIA). Us crude and Brent crude both tumbled, falling nearly 2.4 per cent and 1.54 per cent, respectively. Us ADP employment fell to its lowest level since March 2010 in May, another hint of weakness in the US economy. Nickel both inside and outside the market fell, nickel fell nearly 0.7%, Shanghai nickel fell nearly 1%. Today, we should pay attention to the year-on-year final value of GDP in the first quarter of the euro area compared with the quarter-on-quarter end value, the deposit convenience interest rate of the European Central Bank, the marginal loan rate, the main refinancing rate, ECB President Draghi spoke after the policy meeting. The United States trade account (US $100 million) in April and the number of first-time jobless claims in the United States in the week of June 1 (10,000). It is expected that today's nickel 11650 to 11750 / ton, Shanghai nickel 94700 to 95700 yuan / ton, spot price 96200 to 97200 yuan / ton.

SMM, June 6 (Xinhua) according to SMM research, although the conditions for opening the import window are better this week, the transaction price of the US dollar in the bonded area has not gone up, basically rising from 230 to 240 in the US dollar, and some traders have quoted even higher prices. But it's basically priceless.

SMM, June 6: according to SMM research, not only the price of nickel sulfate showed a downward trend in May, but also its shipment situation was obviously lower than that in April. From the previous supply exceeds demand to the current situation of pressure on shipments. For some large nickel sulfate manufacturers working with large downstream plants, the impact is not great for the time being, while several small factories say that orders have not been well received in the near future, and there is still a lot of room for orders in June.

SMM June 10: according to SMM research, the price of this week's high nickel iron inquiry in a steel mill in the south is 940 yuan / nickel point, including tax, which is the same as last week's inquiry price.

SMM June 6: according to SMM research, the transaction price of high nickel iron in a steel mill in East China this week is 955 yuan / nickel, including tax, which is 5 yuan / nickel point lower than the last purchase price. Subsequently, or due to the continued decline in prices, the steel mill suspended 955 yuan / nickel inquiry.

SMM, June 6 (Xinhua) according to the latest investigation and understanding of SMM, two 42000KVA ore heaters in Indonesia's nickel pig iron plant were released on May 29, but production is not smooth at present, and the increment is expected to be limited in June. Full production will result in an increase of about 1900 metal tons per month.

SMM, June 6 (Xinhua) according to market news, the Indonesian government will re-examine all mining enterprises that have received export quotas for nickel mines. If the mining enterprises do not have the corresponding nickel smelting capacity, Its nickel mine export quota will be withdrawn. According to SMM data, the total number of mining enterprise quotas in effect for Indonesia's remaining quotas is 27.39 million wet tons, all of which are currently being shipped. Indonesia 10 million wet tons of nickel ore has no supporting smelting projects, mainly Indo, Tiran, ACM, Solway, Ceria, Anfang Brother, TPI and other mining enterprises. According to SMM research, the news was released after the Indonesian general election, but has not yet been strictly implemented, and most nickel mining agents said they had not received the relevant news. As Indonesia is during the Eid al-Fitr holiday this week, the details will not be clear until after the end of Eid al-Fitr, and SMM will continue to follow up.

SMM, June 6 (Xinhua) as of Friday, the inventory of nickel mines in all ports in the country had dropped to 12.34 million wet tons, down 70, 000 wet tons from last week, equivalent to 104000 tons of metal, according to SMM. It is down slightly by 600 tons from last week.

According to the SMM survey, the total amount of nickel stocks in Shanghai, including the previous warehouse receipt stocks, increased by 363 tons, or 0.6 per cent, from last week to 57200 tons. The specific changes are as follows: inventory in East China increased by 2200 tons to 26200 tons compared with last week, mainly due to good import profits in the near future. Bonded areas and long-term arrival goods have been declared to enter the mainland one after another. During the same period, the stocks of refined nickel in Shanghai Free Trade Zone (including Shanghai Tianwei, Ritzit, Lingang, Jiekai and Henry Bath) decreased by 3000 tons to 19900 tons compared with last week.

Toyota announced on Friday that it would work with Ningde Times, a Chinese battery maker, to accelerate the transition to electric vehicles. Toyota said it expected to reach its goal of increasing global sales of electric vehicles, including hybrid, pure electric and fuel cell vehicles, to more than 5.5 million five years ahead of schedule. The company said that to achieve this goal, the supply of batteries needs to be increased because the electric vehicle market is growing faster than expected. The cooperation between Toyota and Ningde era means that the research and development of Toyota solid-state batteries is not as good as expected, or may not be ideal, at least in the short term, and means that Toyota recognizes Ningde era as the world's top supplier of lithium batteries. It means Toyota has to deal with the pressure of double points in the Chinese market.