This week's hot period is now a continuation of last week's double-down trend, the spot decline is relatively large. Spot, this week the overall transaction situation is poor, downstream terminals and traders bearish mood is stronger. It is expected that if there is no policy good news released against the trend, boost market confidence, spot prices will still have a weakening trend.

1. Supply side: the planned output in June is-3%, and some steel mills may increase production and hot rolling.

According to the SMM iron and steel survey, the mainstream steel mills plan to produce 940.76 in June, compared with the actual output of 9.7293 million tons-3 per cent in May. In addition, many steel mills are ready to reduce the production of cold rolling and increase hot rolling in June, and the hot rolling output continues to increase in the later stage.

2. Demand side: the downstream terminal manufacturing industry is relatively depressed, and demand is likely to continue to weaken in June.

According to the feedback of downstream terminal research, the production and marketing situation of automobile, household appliances and other industries is poor, and new orders have become weaker, especially cars. As a result, downstream demand continues to be weak, and it is expected to be difficult to recover in the short term without the support of new positive policies.

There has been a continuous double increase in the social database of the factory this week, and the situation of accumulation in various regions is highlighted.

The overall resource arrival volume of hot rolled mainstream steel mills this week totaled 180000 tons, compared with the previous week 183000 tons-3000 tons, a small decline, the market arrival is still under pressure. According to the feedback of investigation, the production restriction in Tangshan and other places has been relaxed a little in June, coupled with the less maintenance of steel mills in recent months, the operation rate of blast furnace is higher, the production of steel mills is more optimistic, and the hot rolling output will pick up. Therefore, it is expected that the market arrival will be on the rise. Of which:

[Shanghai Market] 86000 tons of resources arrived this week, compared with 82000 tons + 4000 tons last week. The overall market arrival pressure has increased compared with last week, in which the resources are mainly Yangang, Bengang and Angang, vertical and horizontal six months there are additional goods. 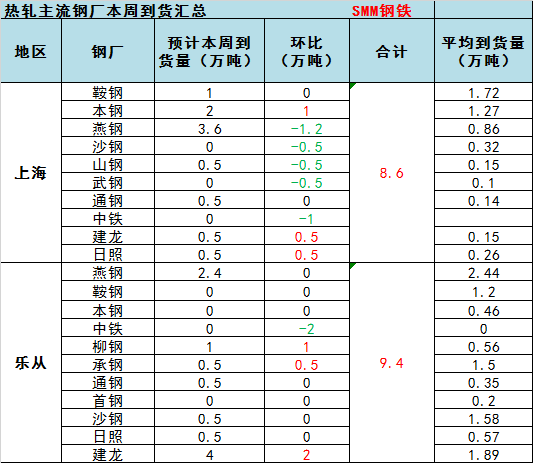 1. Zhang Yiqun, vice chairman of the China Special Committee on Budget performance: it is expected that the scale of local bond issuance will be further accelerated in June.

According to Choice statistics, as of June 2, a total of 489 local bonds have been issued so far this year, with a total issuance amount of 1.949582 trillion yuan. Zhang Yiqun, vice chairman of the China Special Committee on Budget performance, expects that the scale of local bond issuance in June will be about 500 billion yuan, which will be further accelerated than before. It is expected that the issuance of new local government debt in the first half of the year will reach 80% of the whole year, becoming the largest and fastest issuance period over the years, and will continue to inject capital vitality into China's economic growth in the second half of this year.

A few days ago, Shandong issued the "Iron and Steel Industry Air Pollutant Emission Standard" (DB37/ 990 2019). During the transitional period before the implementation of this standard, the existing enterprises shall comply with the relevant requirements of the Comprehensive Emission Standard of Regional Air pollutants in Shandong Province (DB37/2376-2013) and the Pollutant Emission Standard of Iron and Steel Industry in Shandong Province (DB37/990-2013). Among them, the particulate emission concentration limits of converter (primary flue gas), steel slag treatment and waste acid regeneration in the key control area of DB37/2376-2013 are adjusted to 20mg / m3. The limit of nitrogen oxide emission concentration of ironmaking hot blast furnace and steel rolling heat treatment furnace in key control area was adjusted to 150mg/m3.

Heavy truck sales fell again in February and May

3. Tianjin: carry out a new round of rail transit network planning, which is expected to be completed by the end of the year

The Information Office of the Tianjin Municipal Government recently held a press conference at which it said that at present, the Tianjin Municipal Bureau of Planning and Natural Resources is carrying out a new round of rail transit network planning in accordance with the requirements of the overall planning of land and space. It is expected to be completed by the end of the year. With the goal of building "Beijing, Tianjin and Hebei on the track", the plan aims to build a multi-mode integrated rail transit network that integrates intercity railways, municipal tracks, urban tracks and medium volume public transport. The number and total scale of rail transit lines in Tianjin will increase.

4. Key points of Beijing's work on the formulation of Beijing-Tianjin-Hebei coordinated Development in 2019

The Beijing Municipal Development and Reform Commission said that Beijing had formulated key points for promoting the coordinated development of Beijing, Tianjin and Hebei in 2019, which was recently issued and implemented. According to the main points of work, in 2019, Beijing will continue to strictly implement the 2018 edition of the ban and restrictions on new industries, adjust and withdraw from 309 general manufacturing enterprises, dredge and upgrade 50 markets and 16 logistics centers. In the key areas of ecology, transportation, industry and public services, Beijing will speed up the preliminary work of the Jingxiong Section of the Beijing-Hong Kong-Taiwan High Speed Railway and strive to start the construction of the Jingxiong Expressway. The Jingxiong inter-city railway (from Beijing West Station to New Airport Station) will be completed and put into operation. The Jingzhang railway will be completed and opened to traffic by the end of the year, and the Yanchong section of the Jingli Expressway will be completed. Beijing Daxing International Airport will be built to a high standard, with completion and acceptance by the end of June and navigation by the end of September.

Recently, the State Administration of Market Supervision issued an announcement in batches saying that due to the expiration of the production license, and other circumstances, The State Administration of Market Supervision has decided to cancel the relevant industrial product production licenses of many enterprises, such as Tianjin Taifeng Iron and Steel Co., Ltd. According to statistics, there are a total of 32 enterprises involved in the production of iron and steel products, including Tianjin Taifeng Iron and Steel Co., Ltd., Jiangyin Section Steel Plant, Liyang Sanyuan Iron and Steel Co., Ltd., etc. The steel products include hot rolled steel bar for reinforced concrete, steel for prestressed concrete, bearing steel, cold rolled ribbed steel bar and so on.

6. Harbin: carry out special rectification of violations of laws and regulations in real estate development enterprises

From June 1 to October 31, Harbin launched a special crackdown on violations of laws and regulations by real estate development enterprises throughout the city. Focus on the management of commercial housing without pre-sale qualification without authorization to sell, the sale area "lack of two", the expiration of the contract can not be delivered on time and other violations, in order to create a healthy and orderly real estate market development and management environment.

7. Anhui: strengthen the reserve of major project planning and promote the stable growth of effective investment

Recently, the General Office of the Anhui Provincial Government issued the Circular on further strengthening the Planning and Reserve work of Major projects in the Province, calling for the planning and promotion of a number of key projects and efforts to promote effective investment and stable growth. Give full play to the key role of effective investment in optimizing the supply structure.

8. The Federation forecasts sales of 1.59 million vehicles in June, which continues to show a downward trend.

The Federation forecasts that the overall wholesale passenger car market will reach 1.59 million in June 2019 and 1.56 million in July, continuing to show a downward trend. In addition, the Federation believes that due to inventory pressure, dealers in June promotion price reduction behavior will continue. In terms of market segmentation, the Federation forecasts that wholesale sales in the car market will reach 805000 in June 2019, down 16.5% from the same period last year, but up 1.3% from April. The MPV market will reach 96000 vehicles, a year-on-year contraction of 23.5 per cent, up 4.2 per cent from April. By contrast, the SUV market was the smallest segment, with wholesale sales expected to reach 689000 vehicles in June, down 7.6 per cent from a year earlier and up 3.7 per cent from April.