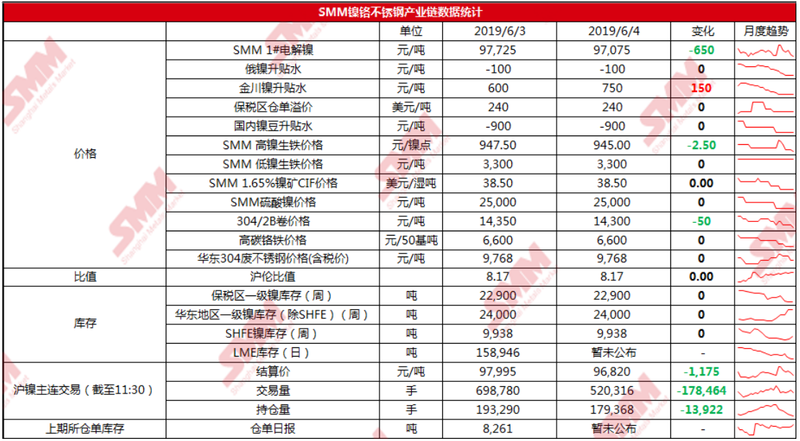 Spot: in the morning, Russia nickel than Wuxi 1906 universal discount 100 to 50 yuan / ton, Jinchuan nickel than Wuxi 1906 contract generally reported water 800 yuan / ton. After the market price fell to around 96700 yuan / ton this morning, the market activity was higher than yesterday, and the feedback transaction from traders was improved compared with yesterday. The warehouse in the early stage of the lower reaches was thicker and lower. Now the absolute price is suitable, so we began to enter the market to purchase. 96700 yuan / ton market price transaction concentration, but the overall buying rhythm is cautious. Jinchuan rising water has slightly higher, mainly because this week Jinchuan supply is a little tighter than before. The mainstream transaction is 96600 to 97300 yuan / ton.

Early trading: nickel opened at $11995 a tonne today, or because of concerns about the overall macro situation, after touching $12030 a tonne at the start of the day, it fell all the way to get support at $11950 a tonne. In the afternoon, Lennie continued its decline in the afternoon and continued to fall into the European session. At night, nickel found support at $11900 a tonne and briefly rebounded before falling below the $11900 / tonne mark, with a narrow range of $11860 / tonne first-line support, closing at $11880 a tonne. The number of families was 10321, the position was 232000, and the inventory increased by 342 tons to 158946 tons. Shanghai nickel opened at 96940 yuan / ton overnight. At the beginning of the day, the center of gravity fluctuated within a narrow range above the daily average of 97000 yuan / ton, and then fell below the 97000 yuan / ton mark. Shanghai nickel rebound failed, won 96500 yuan / ton first-line support, the center of gravity around 96600 yuan / ton first-line narrow range fluctuations. At 96720 yuan per ton. Trading volume increased by 85500 to 369000, while position decreased by 900 to 184000. The dollar tumbled yesterday, falling as low as 97.103, its lowest level since May 13. The main reason is that speeches by dove officials from the Federal Reserve superimposed weak US economic data. In the evening, both the US Markit manufacturing PMI final value in May and the US ISM manufacturing index in May fell short of expectations, with ISM data being the weakest month in two and a half years. Nickel fell nearly 0.9 per cent and Shanghai nickel fell nearly 1.2 per cent. The eurozone should focus today on reconciling CPI parity data for May. It is expected that the amount of nickel is 11800 to 12000 US dollars per ton, the Shanghai nickel 96100 to 97000 US dollars / ton, and the spot price is 97000 to 98500 yuan / ton.

[RNC Mining: production of the Dumont nickel-cobalt project will be increased to 50, 000 tons per year] SMM, June 3-RNC Mining released the positive results of the Dumont nickel-cobalt project on May 30 and updated the feasibility study. During the second phase of the expansion, the initial nickel production of 33 kilotons per year (ktpa), increased to 50 kilotons per year, producing about 1.2 million tons (2.6 billion pounds) of nickel concentrate, with a service life of more than 30 years and an initial capital expenditure of US $1 billion.

Total nickel stocks in Shanghai, including the previous warehouse receipt stocks, rose 1440 tons, or 2.6 per cent, from last week to 56800 tons, according to a SMM survey. The specific changes are as follows: inventory in East China increased by 500 tons to 24000 tons compared with last week, mainly due to good recent import profits, and long-term goods coming to Hong Kong have been declared to enter the country one after another. Over the same period, the stocks of refined nickel in Shanghai Free Trade Zone (including Shanghai Tianwei, Capital Management Hall, adjacent Port, Jiekai and Henry Bath) increased slightly by 100 tons to 22900 tons compared with last week.

Introduction to the SMM nickel team: