SMM6, March 3: on May 30, RNC Mining Company released the positive results of the Dumont nickel-cobalt project and updated the feasibility study report. Mark Selby, President and Chief Executive Officer of RNC, said, "the achievement of this important milestone confirms once again the strong economy of the Dumont nickel-cobalt project. Once in production, Dumont will become one of Canada's largest base metal mines, one of the world's five largest producers of nickel sulfide, and the only large-scale fully allowed nickel-cobalt project. Can begin to meet the significant growth in demand for nickel and cobalt driven by the electric vehicle industry. With the completion of this positive feasibility study, RNC, together with our partner Waterton, can accelerate discussions with potential partners and advance the construction of the Dumont project. "

Large-scale, low-cost, long-life project: during the second phase of the expansion, the initial nickel production capacity increased from 33 kilotons / year (ktpa), to 50 kilotons / year, producing about 1.2 million tons (2.6 billion pounds) of nickel concentrate with a service life of more than 30 years. Initial capital expenditure was $1 billion.

Significant earnings and free cash flow generation support strong project economics: net after-tax income of $9.2 million NPV8%, after-tax internal rate of return 15.4 per cent ("IRR"), Annual EBITDA is expected to increase from $303 million in phase I to $425 million in phase II, with an average of $340 million over the duration of the project. Over the 30-year life of the project, free cash flow averaged $201 million a year.

Top mining assets under excellent jurisdiction: the world's second largest nickel reserves are 2.8 million tons (6.1 billion pounds), with nickel and ninth largest cobalt reserves and 110000 tons (243 million pounds) of cobalt. Once put into production, it has become one of the five largest nickel sulfide businesses in the world, three basic metal assets in Canada and one of the largest battery metal development projects in the world. Fully permitted construction-ready projects are located in the Abitibi area of Quebec, one of the world's leading mining jurisdictions. 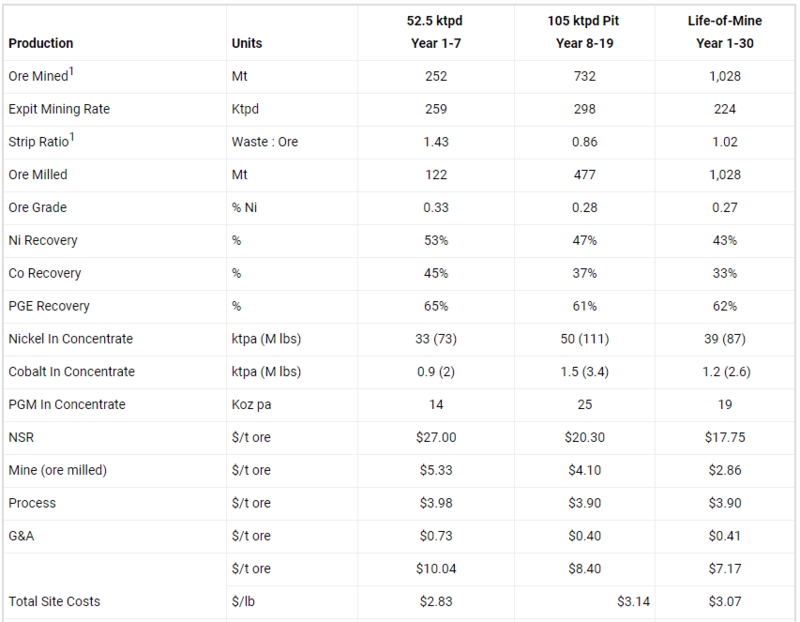