CST
translation
Source:SMM
Trading: overnight aluminum concussion upward, strong in North American trading, once as high as $1811.5 before falling back, closing at $1794, up $13 or 0.73% in the day; Shanghai aluminum opened high and low overnight, the opening price was 14165 yuan, intraday once high 14220 yuan high.

Macro: China announced the introduction of tariffs on some US goods with effect from June 1. The Office of the US Trade Representative announced that the 10% tax rate on Chinese goods shipped to US ports before June 15 would be maintained. Trump's announcement that he will impose a 5% tariff on all Mexican goods has met with domestic opposition, while the United States has announced that it will end GSP treatment for India from June 5. U. S. stocks tumbled on Friday because of frequent trade frictions; domestic news focused on Caixin PMI data for April.

Fundamentals: at the cost end, the price of SMM alumina has been reduced to about 3078 yuan, and the support for aluminum prices has been further loosened. On the consumer side: the export volume of aluminum foil in April was 102800 tons, down 4.53% from the same period last year, and 18.07% lower than the previous month. The decline in export volume was due to three reasons: the export tax rebate was reduced from 16% to 13%. The export of aluminum foil with export tax rebate is concentrated in March; April entered the seasonal off-season; the higher Shanghai-London ratio also had an impact, and exports are expected to fall further in May; waste aluminum imports increased in April from a year earlier, by more than 20 per cent year-on-year. On the one hand, the year-on-year increase is due to the low base of 18 years; on the other hand, it is due to the inverted price of waste aluminum at home and abroad. Continue to pay attention to the following data: 1) inventory changes on Monday, the probability of continued decline; 2) May and June aluminum industry chain production data.

Spot: on Friday, the trading price in Shanghai was between 14160 and 14180 yuan / ton, which was 10 yuan / ton from flat water to rising water in that month, basically the same as the previous day's price. As a result of low prices superimposed on the later price is optimistic, some traders began to actively receive goods, active inquiry between each other. Close to the weekend, downstream for stock consideration, procurement is also more active.

Aluminum prices: in the short term in the cost of loosening, weak demand expectations, aluminum prices phased pressure correction, in the long run, the whole year is still in the storage cycle, the space for decline is relatively limited. Spot aluminum prices are expected to change little today, or fall slightly by 10 yuan per ton. 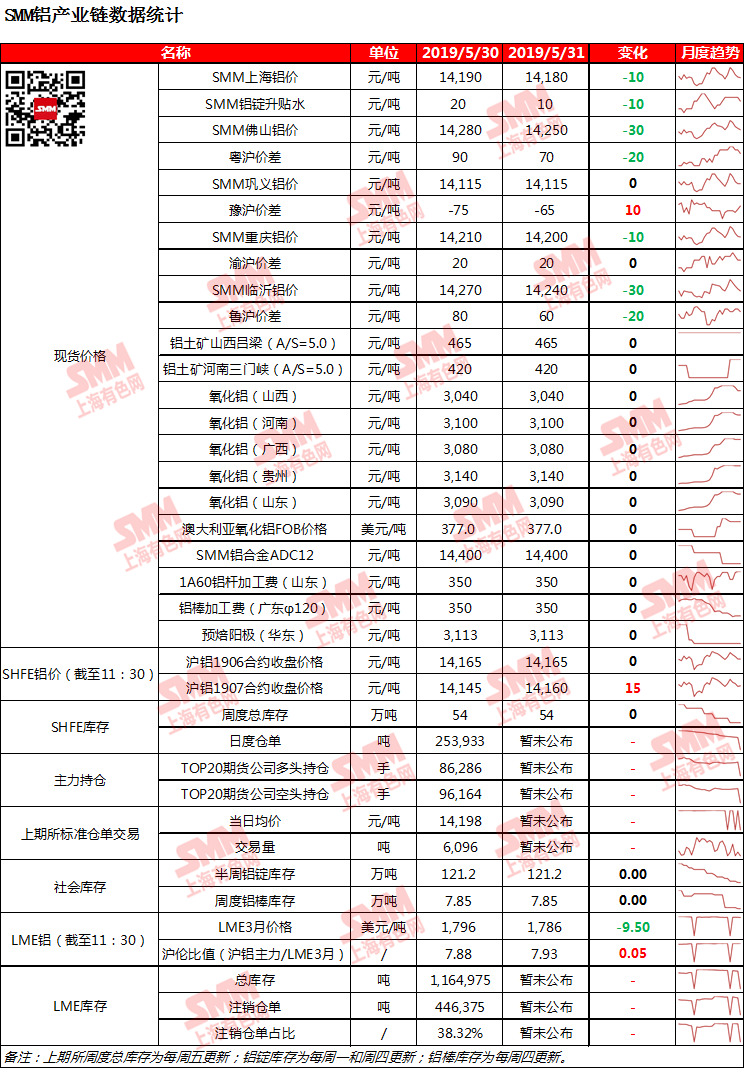