According to SMM survey data, the operating rate of scrap copper rod enterprises in February was 44.47%, a decrease of 5.83% compared with the previous month.

In February, the start-up rate of copper scrap rod-making enterprises continued to fall from the previous month, falling for the fourth month in a row. The decline in the opening rate from January to February was mainly affected by the seasonality, as the impact of the Spring Festival this year was mainly reflected in February, and the scrap copper industry had a relatively longer holiday and was more affected. The decline in the start-up rate in the fourth quarter of last year was due to the decline in copper prices, resulting in a continued low spread of refined scrap prices and weak consumption of scrap copper.

Judging from the price performance, the price trend of copper in Shanghai was strong in February, and the price spread of refined copper rose all the way from 888 yuan / ton to 1551 yuan / ton. The advantage of copper scrap is gradually highlighted, and consumption is now picking up. Years ago, copper prices continued to fall and superimposed early holidays, scrap copper holders to cover the goods to cherish the sale of the mood is obvious. Copper prices rose after the year, in the case of widening profit spread, the holder is also actively arranging delivery. In late February, the terminal gradually resumed work, the scrap copper industry has become hot, some terminals in the fear of high mood to receive goods slightly cautious, after the festival inventory is higher is also the reason for limiting the quantity of orders. Excluding seasonal factors, the scrap copper market performed better in February.

In addition, it is understood that due to the convening of the two sessions, some small copper scrap rod factories around Beijing, such as Henan and Hebei, have been forced to shut down or limit production, and have not yet received the notice to start work, and do not rule out the possibility of being permanently shut down. Because the impact is mainly small scrap copper processing plants, this part of the order is mostly transferred to other scrap copper rod plants, the impact on scrap copper consumption is not significant. According to business reports, this year's environmental regulation has not seen any signs of relaxation, environmental inspection is still strict. Due to the continuous shutdown problem of small copper scrap rod making plant affected by environmental protection, the phenomenon of production capacity concentration appears in the copper scrap rod making industry, which is also one of the reasons for the high start-up rate. Excluding these factors, scrap copper consumption still has a very good performance. 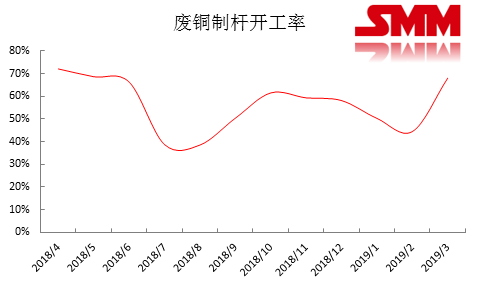