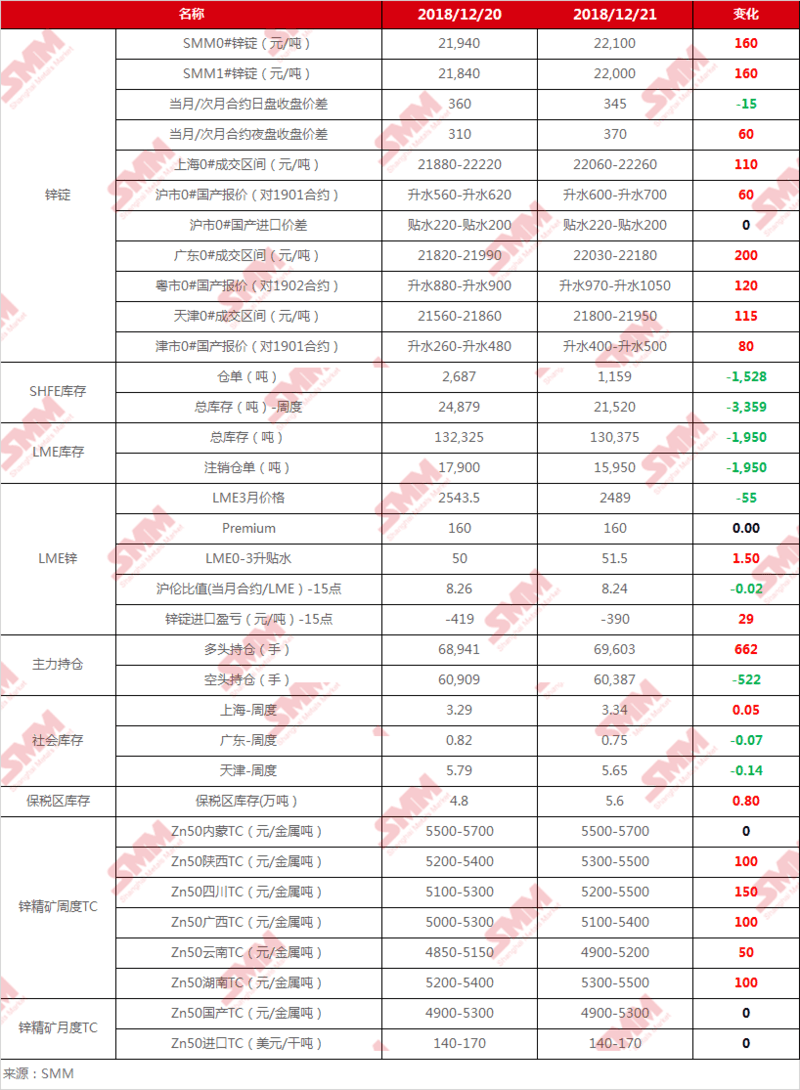 Zinc Morning meeting: Friday Macro: the work of the Central Economic work Conference in 2019 set the tone: positive fiscal policy should increase efficiency, implement larger tax cuts and fees, and greatly increase the size of local government special bonds. Prudent monetary policy should be tight and moderate, and liquidity should be reasonably abundant. Talks on funding for the US-Mexico border wall remained deadlocked, with some government agencies shutting down on Saturday, downward pressure on the economy superimposed by political worries, sharp falls in US stocks, strong risk aversion assets and general pressure on basic metals. Fundamentals: spot review on Friday: Shanghai: refinery shipments are normal, liquidity in the morning market is still tight, and the quotation of the holder has been raised again to 700 to 750 yuan / ton, but the market is afraid of high willingness to receive the goods. In addition, most of the long orders are over today, and the demand for receiving goods by traders has become lighter, with market transactions concentrated on rising water of 700 yuan / ton, and higher prices are slightly more difficult to deal with. Entering the second trading period, the market circulation turned slightly loose, and the quotation was slightly adjusted to about 730 yuan per ton of water, but the transaction was weak, and then the market sold the source of goods at a low price, which was substantially adjusted to 650 yuan per ton of water. In the later stage, it was further adjusted to about 600 yuan / ton, and other holders in the market passively followed suit, but the intensity of the adjustment was limited, and it was still reported at 650 yuan / ton, the transaction was obviously weakened, and the enthusiasm for receiving goods in the market also cooled down. The overall transaction turned light. In the afternoon, the market mainly to shipment, spot rising water further fell back to 580600 yuan / ton, the transaction is flat. Guangdong: the water supply of Shanghai Zinc 1902 contract is about 970 yuan per ton, which is about 120 yuan / ton higher than that of yesterday. During the first trading period, the Southern Reserve inventory continued to decline, the market supply tension gradually heated up, and the market quotation rose accordingly. After the average price-10 supply was quickly digested, the quotation gradually went up to about 1000 yuan / ton for the Shanghai Zinc 1902 contract. Enter the second trading period, the market as a whole shipping sentiment improved, but the majority of the following monthly tickets, the current monthly tickets are still relatively tight, rising water to maintain stability. Demand for long orders is still there today, but the overall transaction volume is small, basically flat yesterday. Tianjin: about 400 yuan / ton of water for the 1901 contract, about 80 yuan / ton higher than yesterday, and 50 yuan / ton narrowed compared with yesterday's discount of 180 yuan / ton in Tianjin market compared with Shanghai stock market. The normal shipment of the refinery was digested yesterday at a low price, and the market quotation was stable around 400 to 500 for the Shanghai Zinc 1901 contract. In terms of consumption, the absolute price went up today. The enterprise bought a little yesterday, but itself had a little inventory. The purchase is not urgent. Have left the market to wait and see, today's overall transaction is worse than yesterday. LME stocks: zinc stocks ended four consecutive increases on Friday, down 1950 tons. Stocks in the three places: as of 12.21, social zinc stocks in the three places decreased by 4600 tons and 1600 tons to 97400 tons compared with 12.14 tons. Tianjin and Guangdong continued to decline, with the Shanghai stock market slightly lower than 12.14 and slightly higher than 12.17. The main reason is that imports have not yet arrived, but some of the Tianjin market supplies flowed into the Shanghai stock market this week, increasing a little supply, the end of the year facing the end of the long order, the market supply further tightened, rising water quickly up. SMM believes that if imports still fail to flow in the short term and the increase in refinery production is limited, inventories will still find it difficult to rise quickly in the short term. Free Trade Zone inventory: [SMM Zinc Ingot Free Trade Zone inventory expansion, and is expected to continue to increase next week] as of Friday (December 21,), SMM Shanghai Free Trade Zone zinc ingot inventory is 56000 tons, For another nine weeks and the increase was further expanded to 8000 tons. It is also reported that some of the goods will still arrive at Hong Kong next week. Zinc price: Len zinc directly below the US $2500 / ton support level, there is no obvious support at present, but the market risk aversion sentiment ease, within a day or finishing repair. Shanghai zinc recorded a negative column down through the multi-way moving average, international political worries and economic downward pressure caused zinc prices to return to the downward channel, and the cooling of consumption at the end of the year partly offset the positive benefits of low inventories, and Shanghai zinc operated independently or weakly during the day. Today's forecast: it is expected that the Shanghai Zinc 1902 contract will run around 20600-21000 yuan / ton in the next day, and the zinc will run around $4880-2520 / ton in the next day. Material 0 # the current zinc is down 400, and it is recommended that the downstream should be purchased on demand.