Disk surface: yesterday, both inside and outside the disk showed relatively weak performance, and the outer plate fell back, falling from a high of US $1953.5 per ton to the lowest level in US $1924 per ton in a day, and the inner Shanghai aluminum fell slightly at night, but compared with copper, nickel and other metals, it showed resistance to decline. Overall stability. Aluminium stocks rose another 57700 tons to 1227325 tons, leading to another increase in all metals, according to the London Metal Exchange yesterday, as the data fell several times. In addition, yesterday's concern about US and Russian oil production caused a sharp fall in crude oil, causing a setback in the metal market.

Macro: the results of interest rate increases by the Federal Reserve in the world may be announced today. The domestic Central Economic work Conference will be held for three days in the near future. It will "set" the direction of economic work next year. The macro trading atmosphere is vulnerable and the market confidence is unstable.

Fundamentals: on the supply side, the previous SMM statistics showed that the production of the aluminum plant was reduced by nearly 2.76 million tons, but with the addition of some small aluminum plants such as Chongqing Guofeng and Sichuan Qixing, the total amount of zero added up to nearly 3 million tons, and the effect of quantitative change in production reduction continued. There is some feedback on the price of aluminum. At the cost end, the foreign Hyde Road resumption incident has not disappeared, if the matter continues to hype, foreign aluminum prices may continue to explore low, but considering that the event fermentation time is too long, the downward space is limited. In addition, recently, there have been several large aluminum plants to meet together, but the theme of the meeting is not known, the issue is expected to be related to the price, but whether the relevant conclusions will be reached, the introduction of joint measures need to be concerned.

Spot end: yesterday, the transaction price in Shanghai was between 13620 and 13640 yuan / ton, the discount for the current month's contract was between 60 and 50 yuan / ton, the Wuxi transaction price was between 13620 and 13640 yuan / ton, and the Hangzhou transaction price was between 13650 and 13670 yuan / ton. Mainstream trading prices rose nearly 100 yuan per ton compared with yesterday. Yesterday, Chinalco received nearly 8000 tons of goods in East and South China. Due to the relatively large price increase, the shippers shipped very actively, but the downstream did not agree with the price very much, and the strength of receiving the goods became cold. It was also more difficult for traders to agree with the price. Receiving the goods was not active. The shipment was mainly shipped. The trading between middlemen has converged, and the number of inquirers and quotations is more and less.

Conclusion: aluminum prices are more resistant to decline, stable in the medium term, this week pay close attention to the Fed to raise interest rates, the Central Economic work Conference and other events transmitted to the market long-short expectations.

Other: 1) Nalco plans to invest 4.5 trillion rupees in the expansion project 2) Jiangsu Changal: 300m yuan to increase its stake in Baotou subsidiary 3) Hebei Province combs and formulates the coal power removal capacity plan for 2019 4) the US Treasury Department: China 10 Holdings of US Treasuries fell for the fifth month in a row in June. It shrank to $1.14 trillion from $1.15 trillion in September, the lowest level since May 2017. China remains the largest foreign creditor to the US, followed by Japan, whose holdings fell $9.5 billion to $1.02 trillion. 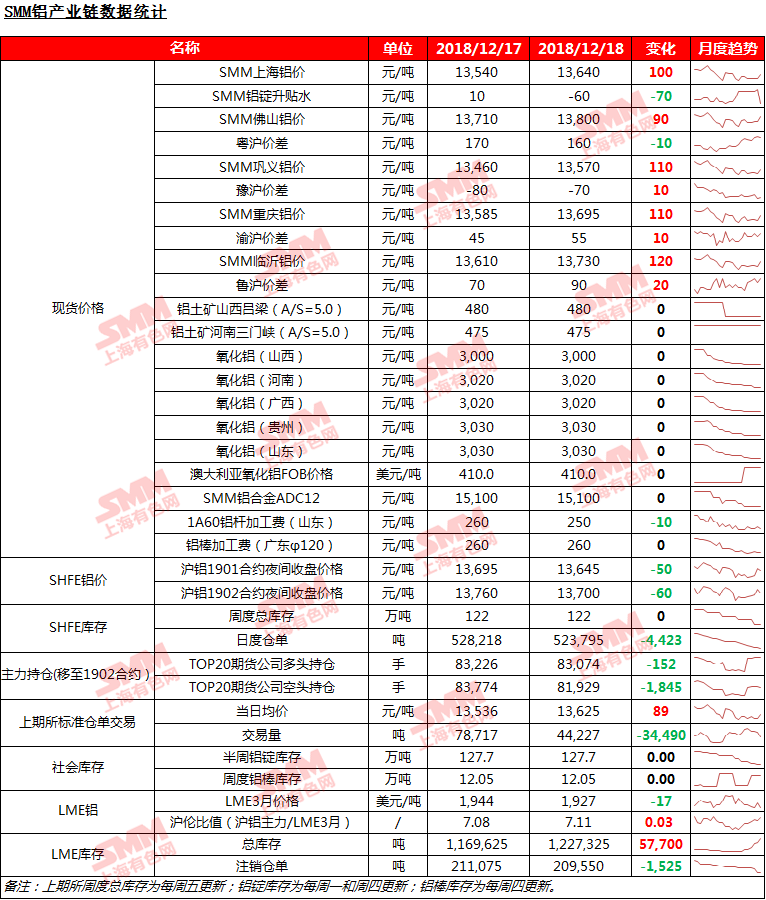