On March 13, 2018, Luoyang Molybdenum shares rose sharply, rising as high as 6.78 percent in intraday trading, hitting an all-time high of 9.45 yuan. As of the close, the stock 9.30 yuan / share, trading volume of 3.817094 million hands, volume ratio 1.32, amplitude 8.02%. Huayu cobalt industry, Pengxin resources, cold sharp cobalt industry, Ganfeng lithium industry and so on have shown an upward trend. Among the small metal stocks, Luoyang molybdenum industry rose the most today, rising 86.70% in 2017 and has risen more than 28% so far this year. 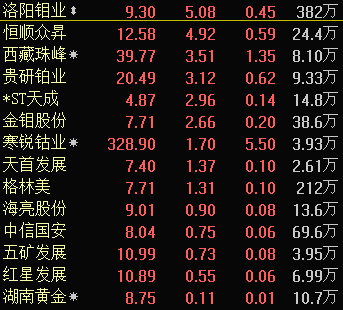 The international index MSCI will officially enter the A-share market for the first time in May, as well as Apple's long-term contract negotiations with three global cobalt mining suppliers (Glencore, Luoyang Molybdenum and Jinchuan International). Have become possible to affect the share price of Luoyang molybdenum industry, from the disk view of Luoyang molybdenum industry have good news.