CST
Source:SMM
SMM data shows that social inventories of zinc ingots across seven major regions in China totalled 71,100 mt as of September 30, down 21,600 mt from a week ago and 22,900 mt from this Monday.

SHANGHAI, Sep 30 (SMM) - SMM data shows that social inventories of zinc ingots across seven major regions in China totalled 71,100 mt as of September 30, down 21,600 mt from a week ago and 22,900 mt from this Monday. In the Shanghai market, the arrivals were still low, while the downstream enterprises were aggressive in stocking up before the National Day holiday as zinc prices and premiums both slumped. As a result, the inventory in Shanghai fell sharply. Likewise, most downstream companies in Guangdong were actively restocking before the holiday, and traders had no intention of retaining goods and make shipments actively. Therefore, the trades at the market were brisk, driving the inventory in Guangdong to go down steeply. In Tianjin, the arrivals in the market returned to normal and became relatively high. Yet thanks to the strong restocking demand of large manufactures, the inventory in Tianjin recorded a rare decline in recent weeks. Overall, the total inventory in Shanghai, Guangdong and Tianjin fell 2.12 mt, and that across seven major markets in China dipped 2.29 mt from Monday. 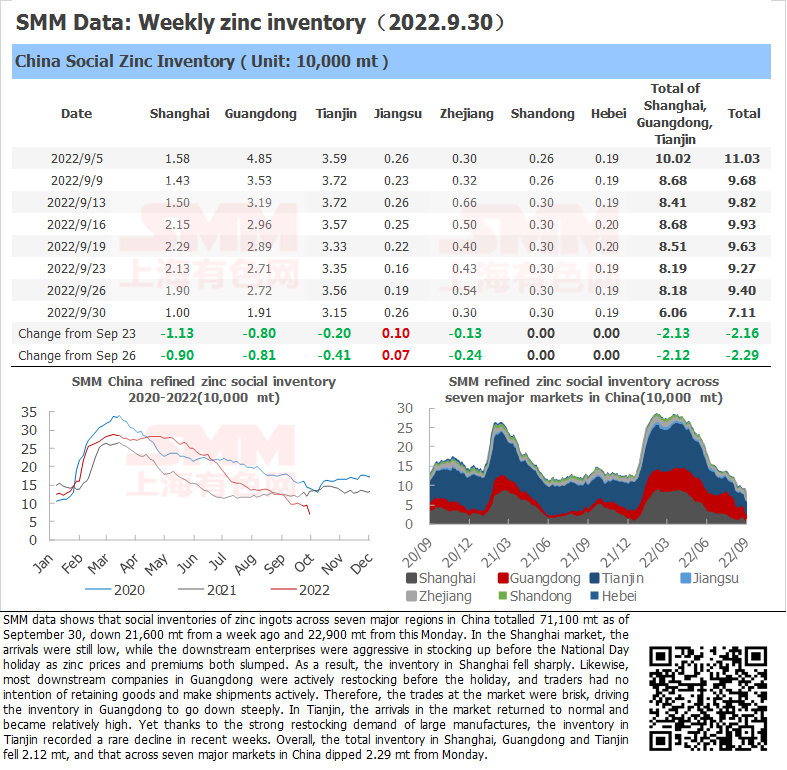