CST
Source:SMM
At the beginning of 2022, domestic aluminium maintained high profitability, and aluminium managed an exciting start in 2022.

SHANGHAI, Mar 9 (SMM) - At the beginning of 2022, domestic aluminium maintained high profitability, and aluminium managed an exciting start in 2022. According to the SMM aluminium cost model (measured by real-time raw material prices), the weighted average full cost of China's aluminium industry in February was about 18,255 yuan/mt, a year-on-year increase of 34.5%. On the combination of SMM prices, SMM believes that the average instant profit of domestic aluminium in February was 4,468 yuan/mt, an increase of 80% year-on-year. All aluminium capacities were making profits in February.

Cost: The prices of raw and auxiliary materials as well as electricity all recorded large increases year-on-year 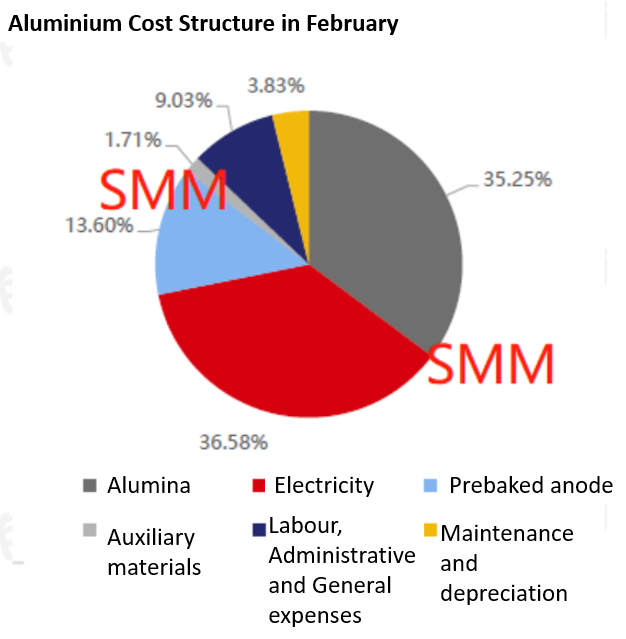 Alumina: In February, the prices of alumina rose before falling

In February, domestic operating alumina capacities dropped mainly because the refineries in Shanxi, Shandong and Henan were inconsistent in production due to the Winter Olympics, and the local refineries cut the production for nearly half a month. In addition, the outbreak of the pandemic in Guangxi affected some alumina production and transportation. In early February, domestic alumina prices rose rapidly. With more refineries that cut the production before resuming the operation, the support from the fundamentals weakened, and the prices of alumina corrected rapidly later in the month. According to SMM data, the cost of alumina for domestic aluminium in February was about 3,319 yuan/my, a month-on-month increase of 10.5% and a year-on-year increase of 36%, accounting for 35.25% of the total cost.

In February, the domestic prebaked anodes ushered in a rebound in the market. The benchmark price of large aluminium plants in Shandong was raised by 350 yuan/mt from the previous month, and the benchmark price was set at 5,005 yuan/mt. The prebaked anode industry chain is relatively simple, with aluminium being the only downstream sector, hence the pricing power is mostly in the hands of aluminium smelters. Aluminium smelters will mostly decide the purchase prices of prebaked anode of the next round based on the prices of petroleum coke and coal tar pitch in the previous round. The price changes of anodes in various regions are roughly the same. Considering the difference in raw material transportation distance, the prebaked anodes used in aluminium smelters in north-west and south-west China are generally higher than those in east China. According to SMM, the national weighted average price of domestic prebaked anodes in February was about 5,521 yuan/mt, a year-on-year increase of 45% and a month-on-month increase of 7%.

And the reasons are as follows:

Thermal coal: China government will continue to stabilise the prices and supply in the coal market. However, the continued surge in overseas energy prices may affect the imports of thermal coal. The potential falling imports will not only exacerbate the shortage of coal for captive power plants but also raise the prices.

Alumina: The tensions between Russia and Ukraine escalated, and Rusal closed its Nikolaev alumina plant in Ukraine, involving a production capacity of 1.77 million mt. The supply of overseas alumina has tended to be in short supply from a tight balance, boosting the prices of overseas alumina by 22% in the month. However, if the conflict or the sanctions on Rusal escalate, the price gap between overseas and Chinese alumina will continue to expand, and China may change from a major alumina importer to an exporter, and boost the domestic alumina market.

Auxiliary materials: Prebaked anode prices are expected to rebound sharply in March under the strong support of petroleum coke prices.

Spot: In March, the aluminium prices are expected to be rise supported by overseas supply shortage and strong domestic fundamentals, and the most-traded SHFE aluminium contract will move between 22,500-24,500 yuan/mt.

Risks: At present, the high profitability of the aluminium industry is largely due to the high aluminium prices. The cost has been at a historically high level compared with the previous years. In the case of high cost and high profit, aluminium enterprises also need to be vigilant about aluminium prices that may pull back rapidly in the future.

Pause Button Pressed at Qinzhou Port, Manganese alloy and Ore Logistics Disrupted
From 0 – 24:00 on 16 March, there were 7 new confirmed local COVID cases in Guangxi (all in Qinzhou City) and 23 new local asymptomatic infections.

Analysts: China's EV Sector So Far Immune to Surging Nickel Prices
Surging nickel prices are unlikely to be a speed bump for China's electric vehicle (EV) sector at this moment, as analysts point out that a large proportion of the key battery metal is being used for making stainless steel.

SMM Evening Comments (Mar 3): Shanghai Nonferrous Metals Most Closed with Gains on Lingering Geopolitical Tensions
Shanghai nonferrous metals mostly closed with gains as the market was still on edge in light of the on-going Russia-Ukraine tensions.

Toll Manufacturing Is Expected to Be More Popular in Cobalt Salt Industry
The cobalt industry has gone through a complete industry cycle from 2015 to 2021, and kicked off a new upward cycle in 2020.

LME Nickel Hit Highs Again, When Will the Geopolitical Tensions Come to A Halt?
LME nickel skyrocketed on the fire between Russia and Ukraine. Intraday LME nickel soared to a high of $26,840/mt since May 31 2011. SHFE nickel, on the other hand, recorded only modest gains compared with its counterpart. As of 11:55 am Beijing time, intraday LME and SHFE nickel rose 3.52% and 0.95% respectively.

Global NEV Prices May Rise on Russia-Ukraine Conflicts
Recently Russia and Ukraine went to war which threw the world into concerns and uncertainties. Behind the contest of strength between the two sides, the landscape in different industries of the world has changed unconsciously.

Nickel Prices Still Carried Upside Momentum with NORNICKEL Nickel Being the Market Focus
Overnight SHFE 2204 nickel rose slightly and once gain tested the 180,000 yuan/mt mark. On the supply side, the current and future trade issues of NORNICKEL nickel are worth attention, as the trade process takes longer time than before.