SHANGHAI, Mar 3 (SMM) - Domestic magnesium prices have been dropping with great volatility entering 2022, which fell from 49,500 yuan/mt to less than 40,000 yuan/mt, down as much as 19.2%. The prices once rallied later amid news of environmental protection-related rectification. However, it is still in the downward trend for the time being. 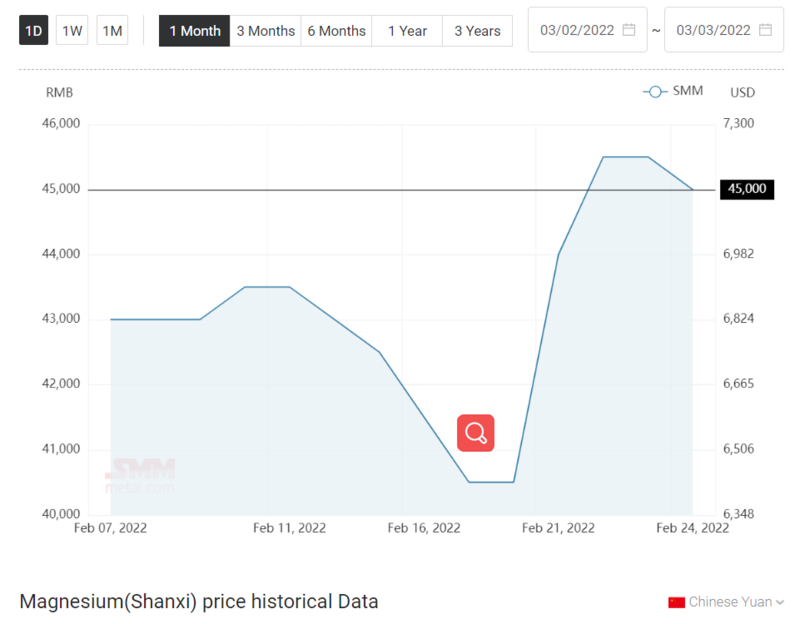 The downstream estimate has been depleted after being stroke by the news front several times, and the high magnesium prices also contained the downstream demand, resulting in thin transactions and an awkward situation where there was literally no demand. In addition, some traders had built heavy stocks for speculative demand, and became eager to sell once the market fell to a stalemate, further dragging down the market.

On the other hand, the market was quite bearish concerning future magnesium prices. According to the traders, magnesium exports rose greatly since Q4 2021, and the overseas participants have basically fulfilled or even over fulfilled their restocking demand. Currently, overseas aluminium smelters generally had sufficient stocks. As such, the terminal was increasingly unwilling to purchase when the prices have been falling for quite some time.

In the face of violently fluctuating magnesium prices, magnesium alloy companies are actively positioning themselves in the industry through production expansion, equipment upgrading, and introduction of high added value projects. A senior officer from a magnesium alloy companies said that “as the applications of magnesium are being expanded and promoted, the greatly fluctuating prices of raw materials are definitely adverse to the process. The market shall stay more rational regarding such price moves, and all market participants shall stay together to build a healthy and sustainable market.”

SMM believes that the concentrated downstream restocking in mid or late March may fall short of expectation in light of large exports since the beginning of the year. And the market is expected to maintain the current imbalance between high upstream stocks and sluggish downstream demand.

Pause Button Pressed at Qinzhou Port, Manganese alloy and Ore Logistics Disrupted
From 0 – 24:00 on 16 March, there were 7 new confirmed local COVID cases in Guangxi (all in Qinzhou City) and 23 new local asymptomatic infections.

Analysts: China's EV Sector So Far Immune to Surging Nickel Prices
Surging nickel prices are unlikely to be a speed bump for China's electric vehicle (EV) sector at this moment, as analysts point out that a large proportion of the key battery metal is being used for making stainless steel.

Aluminium Profits Gained 80% YoY in Feb, and Are Expected to Extend into Mar
At the beginning of 2022, domestic aluminium maintained high profitability, and aluminium managed an exciting start in 2022.

SMM Evening Comments (Mar 3): Shanghai Nonferrous Metals Most Closed with Gains on Lingering Geopolitical Tensions
Shanghai nonferrous metals mostly closed with gains as the market was still on edge in light of the on-going Russia-Ukraine tensions.

Toll Manufacturing Is Expected to Be More Popular in Cobalt Salt Industry
The cobalt industry has gone through a complete industry cycle from 2015 to 2021, and kicked off a new upward cycle in 2020.

LME Nickel Hit Highs Again, When Will the Geopolitical Tensions Come to A Halt?
LME nickel skyrocketed on the fire between Russia and Ukraine. Intraday LME nickel soared to a high of $26,840/mt since May 31 2011. SHFE nickel, on the other hand, recorded only modest gains compared with its counterpart. As of 11:55 am Beijing time, intraday LME and SHFE nickel rose 3.52% and 0.95% respectively.

Global NEV Prices May Rise on Russia-Ukraine Conflicts
Recently Russia and Ukraine went to war which threw the world into concerns and uncertainties. Behind the contest of strength between the two sides, the landscape in different industries of the world has changed unconsciously.

Nickel Prices Still Carried Upside Momentum with NORNICKEL Nickel Being the Market Focus
Overnight SHFE 2204 nickel rose slightly and once gain tested the 180,000 yuan/mt mark. On the supply side, the current and future trade issues of NORNICKEL nickel are worth attention, as the trade process takes longer time than before.

All
MOST POPULAR
1.China Weekly Inventory Summary and Data Wrap (Sep 23)
2.China Weekly Inventory Summary and Data Wrap (Sep 16)
3.Manganese Ore Shipments at Tianjin Port Are Disrupted by Worsening Pandemic Situation
4.Exports of SiMn Alloy Fell Sharply by 71% in August amid Weak Overseas Demand
5.Polysilicon October Long-Term Orders Prices Mostly below 310 yuan/kg
Shanghai Metals Market
Privacy PolicyCompliance CentreSMM Credit ServiceContact UsAbout UsTerms & ConditionsSitemap
Notice: By accessing this site you agree that you will not copy or reproduce any part of its contents (including, but not limited to, single prices, graphs or news content) in any form or for any purpose whatsoever without the prior written consent of the publisher.