CST
Source:SMM
This is a roundup of China's metals weekly inventory as of December 3.

SHANGHAI, Dec 3 (SMM) - This is a roundup of China's metals weekly inventory as of December 3.

SMM data showed that China's social inventories of aluminium across eight consumption areas dropped 15,000 mt on the week to 1 million mt as of December 2, mainly contributed by Nanhai, Shanghai and Wuxi. The inventory in Gongyi rose on the week. The stocks of aluminium billet in five major consumption areas dropped 7,200 mt to 71,700 mt on December 2 from a week ago, a decrease of 9.14%. And the inventory has been falling for seven straight weeks.

Looking forward, the downstream sectors of aluminium billet became less interest in purchasing, and some of them turned to aluminium ingot as the conversion margin of aluminium billet was high compared with the re-smelting costs. Meanwhile, the warehouses reported that the transportation in north-west China is still disrupted. Hence the social inventory will keep falling but at a much slower pace, and there is also possibility that the inventory would rise on the week. 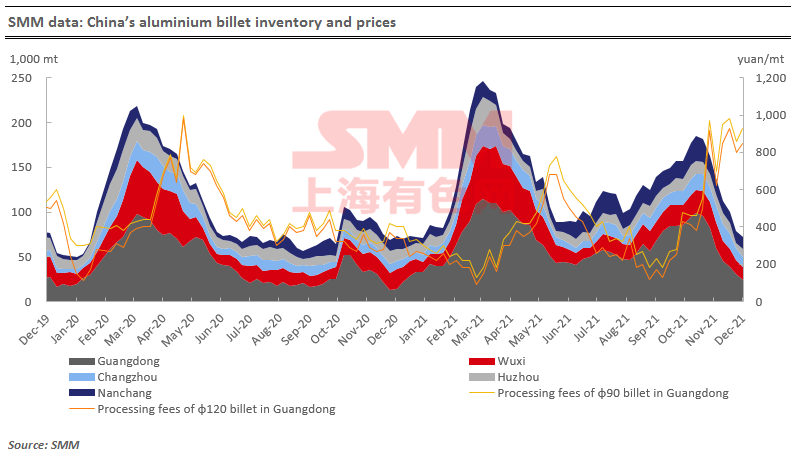 As of Friday December 3, the copper inventory across major Chinese markets fell 6,700 mt from Monday to 82,700 mt. The declines were mainly seen in Shanghai, Guangdong and Tianjin.

Specifically, the inventory in Shanghai decreased by 2,400 mt to 61,100 mt, and the inventory in Guangdong decreased 3,600 mt to 5,900 mt. The inventory in Tianjin declined 600 mt to 1,400 mt. The copper price continued to fall this week. And downstream companies stockpiled actively on adequate cash flows at the start of the month, which were the main reasons for the decline in inventories.

In addition, the invoice issuance issue for imported copper remains as a trouble in December, making it difficult to clear a large volume of imported copper into the domestic market. The smelters that undertook maintenance resume production. The volume of imported copper is unlikely to grow. The total supply is likely to grow slightly. The consumption is expected to remain stable as long as the copper prices do not rise sharply. Therefore, the inventory may increase slightly. And there is room for the spot premiums to drop, but the decline will not be significant.

The copper inventories in the domestic bonded zones dipped 5,700 mt from November 26 to 183,500 mt as of Friday December 3, the eighth consecutive week of decline, according to the most recent SMM survey.

The inventory in the Shanghai bonded zone decreased 4,700 mt to 169,600 mt, and the inventory in the Guangdong bonded zone fell 1,000 mt to 13,900 mt. There were inflows of cargoes under warrants which were imported when the SHFE/LME copper price ratio was profitable. The arriving shipments decreased. Meanwhile, it has been difficult for some ships to call at ports due to the strengthening of the customs' quarantine work on inbound ships. And the port work efficiency was low. As such, the bonded zone inventories continued to decline.

Zinc Inventories Down 5,000 mt on the Week

The inventory in Shanghai declined as only a small amount of imported zinc arrived and downstream producers began to restock goods after digesting government stockpiles. The stocks in Guangdong declined slightly as the arrivals of goods declined on the week and shipments stabilised. Tianjin saw an increase in the stocks as downstream producers mainly restocked on rigid demand. Inventories in Shanghai, Guangdong and Tianjin fell 4,200 mt, and inventories across seven Chinese markets decreased 5,000 mt.

The secondary lead smelters in Jiangsu and Anhui continued the maintenance, and some smelters in Jianxi reduced the production under the inspections of Solid Waste Management Centre.

The Ministry of Ecology issued a notice on December 1 that the second round of the fifth batch of central environmental protection inspections was fully launched, and four inspection teams will be stations in Heilongjiang, Guizhou, Shaanxi, and Ningxia for one month. Some secondary lead smelters in Guizhou have reduced the production, and the downstream users consumed the social stocks in surrounding areas.

Some primary lead smelters will end maintenance next week, and the output is expected to increase. The lead ingot exports may drop as the export causes losses amid rising SHFE/LME price ratio. The lead ingot social inventory may drop more slowly.

The social inventory of silicon metal across Huangpu port, Kunming city and Tianjin port increased 3,000 mt from the previous week to 81,000 mt as of Friday December 3.

The operating rates across the plants in south and north China remained hight. The silicon metal inventories were transferred from factories to social warehouses. The social inventory increased amid sluggish transactions.

The arriving shipments of nickel ore have decreased recently. The nickel ore inventory is expected to slide further in the short term. The SHFE/LME nickel price ratio rallied this week after remaining sluggish for several consecutive weeks. SMM believes that the resurgence of the COVID-19 pandemic has triggered overseas concerns over the collapse in the demand.

The domestic demand was stable. Meanwhile, the arriving shipments in China continued to decrease. However, the output of nickel sulphate and stainless steel remained high. The domestic nickel inventory declined this week.

Large volumes of planned shipments arrivals of nickel briquette and nickel plate may impact the domestic supply. This combined with the weak downstream buying interest will increase domestic inventory. As such, the upside room for the SHFE/LME nickel price ratio will be limited.