CST
Source:SMM
This is a roundup of China's metals weekly inventory as of November 26.

SHANGHAI, Nov 26 (SMM) - This is a roundup of China's metals weekly inventory as of November 26

As of Friday November 26, the copper inventory across China’s major trading markets increased 13,900 mt from Monday to 90,400 mt.

The inventory growth in Shanghai and Guangdong was the most significant.

The inventories in Shanghai increased by 9,100 mt from Monday to 62,800 mt, mainly due to the increase in shipments arrivals. As the customs restrictions on invoice issuance have eased, the importers transferred cargoes from bonded zone inventories into the domestic market to capitalise on the high premiums in the domestic spot market. The cargoes transferred from Guangdong also arrived.

The inventories in Guangdong increased by 4,600 mt from Monday to 11,100 mt. The local consumption was weak, while the arrivals of imported and domestic copper increased.

The copper inventories in the domestic bonded zones declined 17,300 mt from November 19 to 189,200 mt as of Friday November 26, the seventh consecutive week of decline, according to the most recent SMM survey.

The import window remained open in the first half of the week, and the customs restrictions on invoice issuance was alleviated. In this scenario, the importers moved the goods in the bonded warehouse to the domestic market. This continued to reduce the inventory in the bonded area.

However, with the closing of the import window in the second half of the week, domestic spot premiums have declined. And the demand for customs declaration and imports in the market has cooled. It is expected that the decline in the bonded zone inventory will slow down next week.

The SHFE/LME nickel price ratio surged before falling this week.

The low domestic inventory early in the week combined with the high premiums in the domestic spot market improved the SHFE/LME nickel price ratio. But the price ratio returned to the previous level with the arriving shipments of domestic nickel briquette and price cuts by Jinchuan Group.

The port inventory has trended lower due to the impact from the wet season in the Philippines. The arriving shipments at various ports decreased. Meanwhile, the NPI production has gradually recovered.

The nickel ore inventory at ports will continue to fall in the short term due to slower supply and stronger demand. 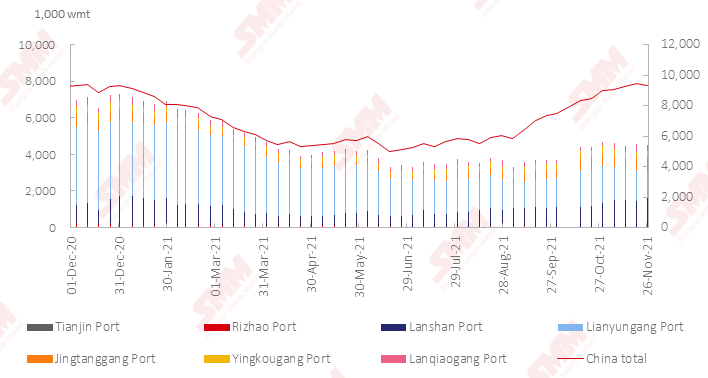 The social inventory of silicon metal across Huangpu port, Kunming city and Tianjin port decreased 2,000 mt from the previous week to 78,000 mt as of Friday November 26.

The inventory in north China increased slightly as there were large volumes of arrivals at Tianjin port. In south China, the shipments were higher than the arrivals in Kunming and at Huangpu port, so the inventories declined slightly. The total silicon metal inventory dropped. The downstream users were mostly wati-and-see, and the operating rates in south-west China stood high. The silicon metal social inventory is expected to stand flat or increase slightly next week.

SMM data showed that China's social inventories of aluminium across eight consumption areas dropped 21,000 mt on the week to 1.02 million mt as of November 25, mainly contributed by Nanhai, Shanghai and Gongyi. The inventory in Wuxi continued to rise slightly on the week. 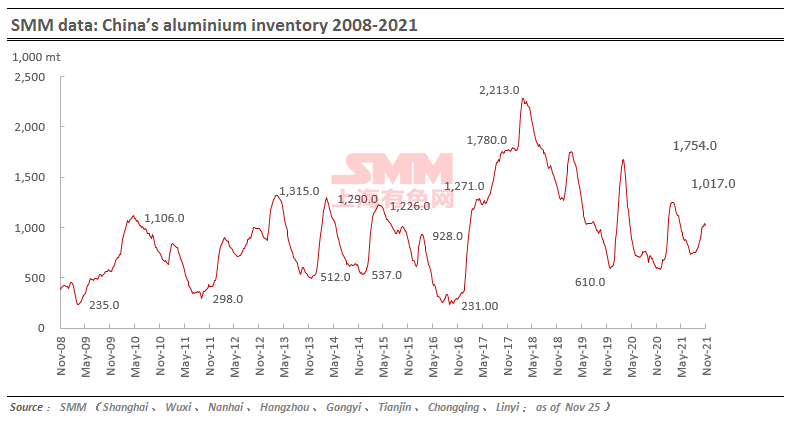 The stocks of aluminium billet in five major consumption areas dropped 21,600 mt to 78,900 mt on November 25 from a week ago, a decrease of 21.5%. And the inventory has been falling for six straight weeks.

The inventory in Foshan and Huzhou dropped the most, while Wuxi and Changzhou also experienced falls in local inventories. The main cause is that the downstream sector actively purchased on rises as aluminium prices have been increasing continuously in the week, which recorded 19,320 yuan/mt in east China, up 980 yuan/mt from a week ago, according to SMM. Meanwhile, the transportation capacity was reduced in north-west China due to poor weather, hence the arrivals from north to south China was postponed. The weekly arrivals in south China were at a comparatively low level.

Looking into the following week, the orders of aluminium extruders in Shandong and Jiangxi improved according to SMM research, creating more demand for aluminium billet; while the overall operating rates of aluminium billet companies have been relatively stable. However, the supplies from the north will continue to be delayed due to reduced transportation capacity in north-west China. Hence, the aluminium billet inventory is likely to fall again. 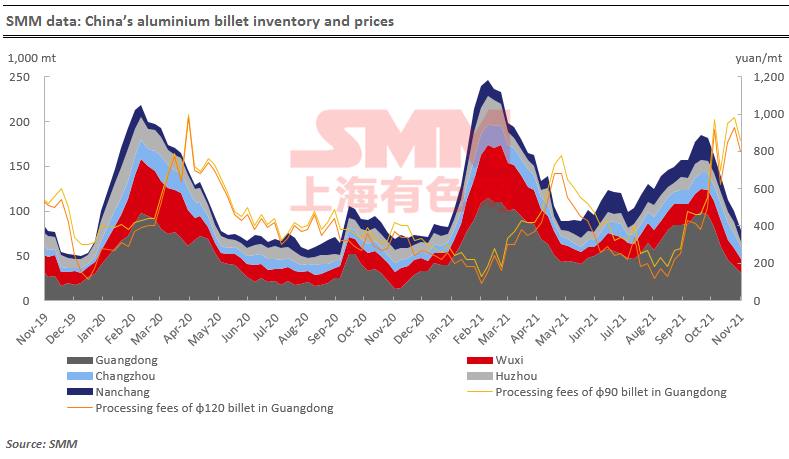 The inventory in Shanghai increased amid rising imported zinc. Guangdong saw an increase in stocks due to increasing arrivals of goods in the market and weak downstream demand. The stocks in Tianjin accumulated as the arrivals of goods continued to increase and weak downstream demand. Inventories in Shanghai, Guangdong and Tianjin rose 7,700 mt, and inventories across seven Chinese markets increased 6,400 mt.

According to SMM survey, large secondary lead smelters in Anhui underwent maintenance last week. Hunan was subject to environmental protection inspections, affecting the production at some primary lead smelters. The supply tightens again. Lead prices rose again and reached 15,500 yuan/mt. Downstream producers restocked goods on rigid demand. Lead consumption in the Southeast Asian market is bullish, boosting exports of lead ingots. The decline of lead ingots across domestic five markets expanded to 20,000 mt. The maintenance at some companies will end this week. The tight supply is expected to be eased while the decline of lead ingots inventories is likely to slow.

The average operating rate across primary lead smelters in Henan, Hunan and Yunnan provinces gained 2.6 percentage points from the previous week to 59.29% in the week ended November 26, an SMM survey showed.

The production in Henan stood stable. Henan Xinling increased the production to the full capacity, and Wanyang Co. completed the maintenance of crude lead production line last week. The production of refined lead was unaffected.

Shuikoushan in Hunan will complete the technical upgrade in December and resume the production at the end of December. Shuikoushan Zhihui increased production slightly after resumption. The environmental protection inspections only affected the crude lead production in Hunan, and the refined lead production was stable.

Yunnan Hongqian completed the restocking of raw materials and resumed the normal production. Guangdong Zhongjin Lingnan will start maintenance as planned in early December, which will last for about half a month.

Average Operating Rate of Secondary Lead Smelters Down 7.52% on week

The operating rates across licensed smelters of secondary lead in Jiangsu, Anhui, Henan and Guizhou averaged 44.61% in the week ended November 26, down 7.52 percentage points from the previous week, an SMM survey showed.

The operating rate fell unexpectedly mainly due to the temporary maintenance in some smelters.

In Jiangxi, the production was reduced in Jiangxi Fengri Co., Yiyang Xingwang Co., and Zhenyu Co., amid inspections by the solid waste centre.

Guizhou Huoqilin Co. and Jiangxi Jinyang Co. resume the normal production as planned. However, the overall work resumption failed to make up for the reduction, so the average operating rate declined.

Going forward, the operating rate is expected to rebound after the maintenance in Shandong Zhongqing Co. and the inspections in Jiangxi.

The average operating rate across lead-acid battery producers in Jiangsu, Zhejiang, Jiangxi, Hubei and Hebei provinces increased 1.69 percentage points from November 19 to 78.57% as of Friday November 26.

According to SMM survey, the consumption in lead-acid battery market was largely unchanged. Some distributors increased their purchases as the lead prices rebounded. The orders received by companies were stable.

Operating Rate of Lead-Acid Battery Plants Down 0.22% on Week
The average operating rate across lead-acid battery producers in Jiangsu, Zhejiang, Jiangxi, Hubei and Hebei provinces decreased 0.22 percentage point from September 17 to 67.93% as of Friday September 24.

MOST POPULAR
1.Exclusive: China's Metals Output in December
2.China Weekly Inventory Summary and Data Wrap (Jan 14)
3.Silicon Metal Prices Dropped amid Weak Supply and Demand
4.Will the Rainstorm in Brazil Shore up Manganese Ore Prices?
5.China Weekly Inventory Summary and Data Wrap (Jan 21)
Shanghai Metals Market
Privacy PolicyCompliance CentreSMM Credit ServiceContact UsAbout UsTerms & ConditionsSitemap
Notice: By accessing this site you agree that you will not copy or reproduce any part of its contents (including, but not limited to, single prices, graphs or news content) in any form or for any purpose whatsoever without the prior written consent of the publisher.