CST
Source:SMM
This is a roundup of China's metals weekly inventory as of November 19.

SHANGHAI, Nov 12 (SMM) - This is a roundup of China's metals weekly inventory as of November 19.

SMM data showed that China's social inventories of aluminium across eight consumption areas added 31,000 mt on the week to 1.04 million mt as of November 18, mainly contributed by Wuxi, Gongyi and Shanghai. The inventory in Nanhai dropped on the week. And the market shall watch the arrivals of goods at key places of consumption. 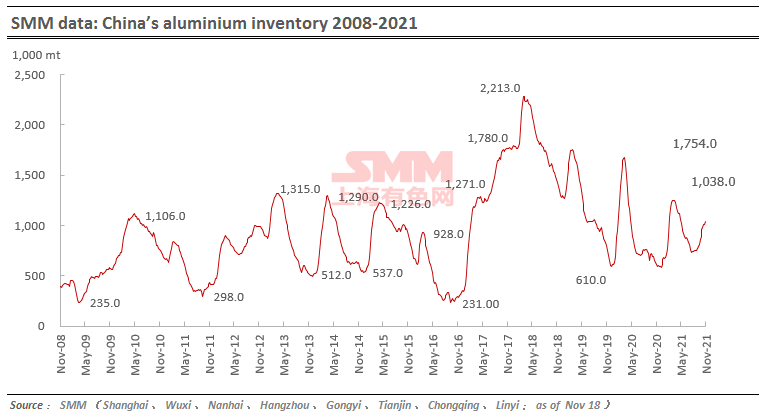 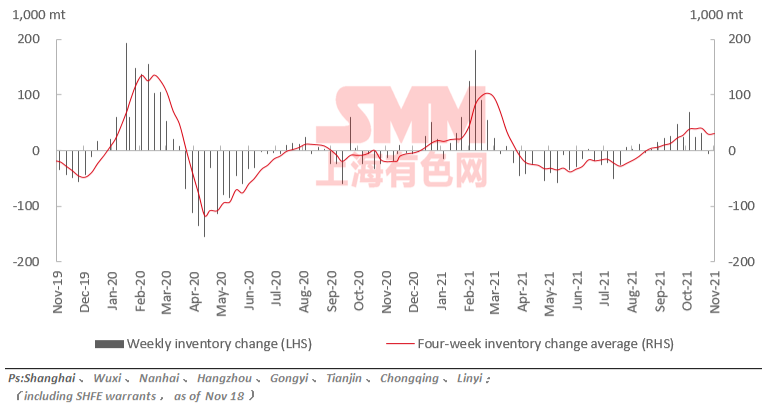 The stocks of aluminium billet in five major consumption areas dropped 11,700 mt to 100,500 mt on November 18 from a week ago, a decrease of 10.43%. And the inventory has been falling for five straight weeks.

The declines still mainly come from Foshan (down 6,500 mt or 14.44%) and Wuxi (down 3,100 mt or 13.54%). Nanchang and Changzhou also saw some drops in their inventories. The main reasons include the still-low arrivals of aluminium billet and warming transaction market amid falling aluminium prices that week that revived the downstream market.

Looking forward, the orders and production activities of extrusions of all sizes across China have been moderate, according to SMM. And the warehouses reported that the arrivals of aluminium billet will not see increases next week. As such, the inventory may keep dropping in the following week. 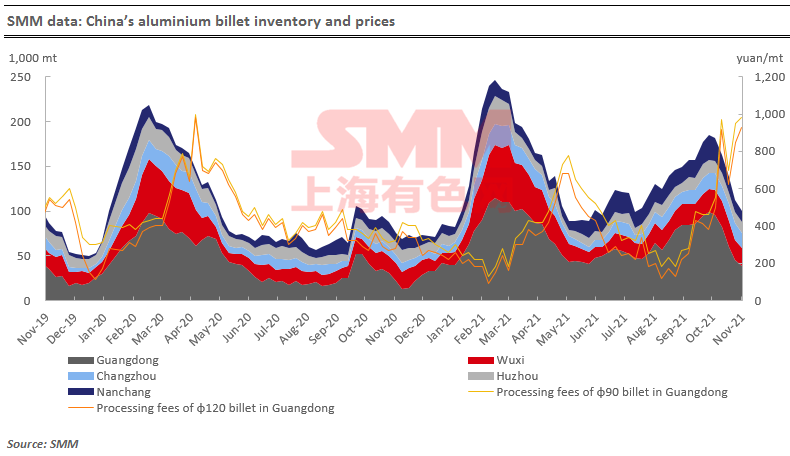 The weekly inventory dropped again. Among them, the inventory in Shanghai dropped amid more shipments from warehouses, as the downstream consumption picked up as zinc prices plunged. The arrivals in Guangdong has been on the rise as the smelters’ output ramped up steadily. The inventory in Tianjin rose on the week due to sluggish downstream demand and improving market arrivals.

Generally speaking the inventory in Shanghai, Guangdong and Tianjin dropped 800 mt on the week, and those across seven major consumption areas declined 2,600 mt.

The social inventory of lead ingots across Shanghai, Guangdong, Zhejiang, Jiangsu and Tianjin decreased 9,700 mt from last Friday November 12 and dropped 5,000 mt from Monday November 15 to 159,500 mt as of November 19.

The primary and secondary lead smelters were under maintenance or resumed production this week, leading to diverged supply in different regions. The smelters were sluggish in small orders transaction amid plunging lead prices, and some downstream companies have advanced the delivery of next-month long-term orders. In terms of prices, the discounts of small orders from primary lead smelters turned to premiums, and the discounts of secondary lead also narrowed. As of November 19, the prices of secondary refined lead were in premiums of -30 – 30 yuan/mt over SMM 1# lead. As such, some buyers turned to the trading market for transactions, which pushed down the social inventory.

Looking forward, both primary and secondary lead smelters will see recovery in production, and the differences of supplies in different regions will also narrow. While the lead consumption is also estimated to be moderate. As such, lead social ingot inventory will continue to fall.

The copper inventories in the domestic bonded zones decreased 9,700 mt from November 12 to 206,500 mt as of November 19, falling for six consecutive weeks, according to SMM survey.

The import window reopened this week. The customs restrictions on invoice issue have pushed the premiums in the domestic spot market to surge amid the ultra-low domestic inventory.

As of November 19, the SMM average premium of spot #1 copper cathode rose to a record high of 2,200 yuan/mt. The import profit has driven importers to continue to move goods from bonded warehouses into the domestic market, thereby driving the decline in the bonded zone inventory.

Operating Rate across Primary Lead Smelters Down 0.07% on Week

The average operating rate across primary lead smelters in Henan, Hunan and Yunnan provinces lost 0.07 percentage point from the previous week to 56.69% in the week ended November 19, an SMM survey showed.

The production in Henan was generally unchanged. The crude lead production lines of Wanyang Co. are still under maintenance, and are expected to resume the production next week. The output of refined lead has been unaffected. Shuikou Jinxin in Hunan has finished the stocking of raw materials, and will produce according to production targets, hence the output ramped up slightly from a week ago. Some small smelters in Gejiu, Yunnan reduced their output due to factors like the rising raw materials prices, and it remains uncertain as of when they will return to normal. Jiangxi Jinde completed its maintenance this week and resumed production.

Operating Rate across Secondary Lead Smelters Up 2.85% on week

The operating rates across licensed smelters of secondary lead in Jiangsu, Anhui, Henan and Guizhou averaged 52.13% in the week ended November 19, up 2.85 percentage points from the previous week, an SMM survey showed.

This week, Dahua Co. and Chaowei Co. increased their output palpably as they got off the influences from the power outrage in Anhui; Anhui Tianchang passed the environmental impact assessment, and resumed normal production. Meanwhile, Shanxi Yichen and Jiangxi Zhenning also contributed some of the increases after maintenance. On the other hand, the operating rates of Anhui Xinda, Jiangxi Rifeng, Jiangxi Jinyang, Guizhou Huoqilin and Inner Mongolia Jinfan lowered due to market volatility or equipment failure. Also, the output of Hebei Shichang reduced amid environmental protection-related government control. In general, the increases in operating rates were larger than decreases, hence the overall operating rates maintained growth.

Going forward, the production of Guizhou Huoqilin, Jiangxi Jinyang and Jiangxi Fengri is expected to return to normal next week. But considering that a few smelters in Anhui will suspend production amid environmental protection requirements, the combined operating rates will increase slightly.

The average operating rate across lead-acid battery producers in Jiangsu, Zhejiang, Jiangxi, Hubei and Hebei provinces stood largely flat at 76.89% on the week as of Friday November 19.

The end consumption of lead-acid battery was moderate. The expanded production across producers alleviated the supply shortage, and the risk aversion sentiments rose amid falling lead prices. The distributors and retailers were less willing to purchase, so the producers received fewer new orders. Most battery companies shipped for the previous orders, and the production was basically stable.

The total nickel ore inventories continued to grow even as some ports have seen inventory declines recently.

The shipments of nickel ore have slowed down significantly. The ocean freight has fallen amid the eased shipping pressure. The NPI output has gradually recovered. The nickel ore inventory is expected to decline next week. 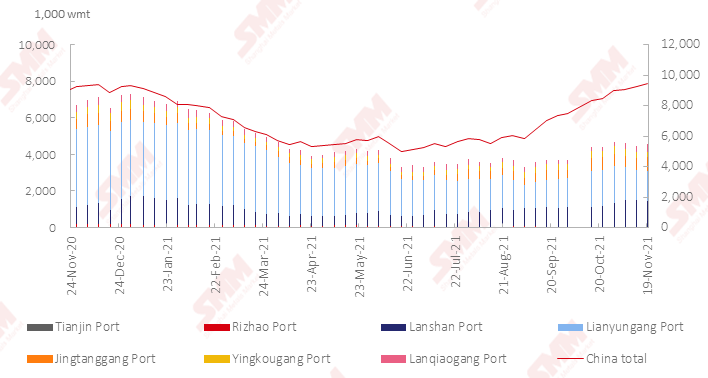 The SHFE/LME nickel price ratio remained low this week. But the concentrated buying on the dip lowered the domestic nickel inventory.

The domestic supply tightness is expected to intensify if the domestic demand remains stable and the nickel price ratio remains at the current level. As such, the import window is likely to reopen.

The social inventory of silicon metal across Huangpu port, Kunming city and Tianjin port decreased 9,000 mt from the previous week to 80,000 mt as of Friday November 19.

The transactions at Tianjin port was robust. Most cargoes that arrived last week were shipped this week, and the shipments were significantly higher than the arrivals. The overall inventory at Huangpu port increased slightly. A batch of cargoes were shipped from Kunming this week, and the social inventory declined despite high operating rates across local silicon metal, which indicated the active transactions and the increased inter-plant transactions. The social inventory of silicon metal is expected to stand flat or increase slightly next week.

Operating Rates of Lead-Acid Battery Plants Up 0.06% on Week
Operating rates across lead-acid battery producers in Jiangsu, Zhejiang, Jiangxi, Hubei and Hebei provinces inched up 0.06 percentage point from August 20 to 69.72% as of Friday August 27.

Operating Rates of Secondary Lead Smelters Down 3.32% on Week
Operating rates across licensed smelters of secondary lead in Jiangsu, Anhui, Henan and Guizhou averaged 61.18% in the week ended August 13, down 3.32 percentage points from the previous week, showed an SMM survey.

Operating Rates of Copper Rod Produced from Secondary Copper Down 7.59% on Month
Operating rates of copper rod producers with secondary copper stood at 59.53% in July, down 7.59 percentage points month on month 9.88 percentage points year on year.

Operating Rates of Secondary Lead Smelters Up 0.05% on Week
Operating rates across licensed smelters of secondary lead in Jiangsu, Anhui, Henan and Guizhou averaged 64.50% in the week ended August 6, up 0.05 percentage point from the previous week, showed an SMM survey.

China Weekly Inventory Summary and Data Wrap (Aug 6)
This is a roundup of China's metals weekly inventory as of August 6.

All
MOST POPULAR
1.China Weekly Inventory Summary and Data Wrap (May 13)
2.China Weekly Inventory Summary and Data Wrap (May 20)
3.Silicon Metal Prices Kept Falling on Market Pessimism and Inconsistent Quotation
4.Silicon Metal Prices Fell Continuously due to the Poor Transactions amid Weak Demand
5.The Market Outlook of Silicon Metal Prices was Gloomy and Silicon Metal Prices Continued to Decline amid Strong Supply and Weak Demand
Shanghai Metals Market
Privacy PolicyCompliance CentreSMM Credit ServiceContact UsAbout UsTerms & ConditionsSitemap
Notice: By accessing this site you agree that you will not copy or reproduce any part of its contents (including, but not limited to, single prices, graphs or news content) in any form or for any purpose whatsoever without the prior written consent of the publisher.