CST
Source:SMM
This is a roundup of China's metals weekly inventory as of September 24.

SHANGHAI, Sep 24 (SMM) - This is a roundup of China's metals weekly inventory as of September 24.

As of Friday September 24, copper inventory across major Chinese markets plunged 8,500 mt from a week earlier to 103,500 mt, the lowest for the year, according to SMM data.

Only Chongqing saw a slight increase of 300 mt in inventory this week. Inventories fell across all other regions. And the largest decline was seen in Shanghai, which is 3,700 mt, followed by Jiangsu, where inventories fell by 2,500 mt.

Shipments arrivals of imported copper in east China after the Mid-Autumn Festival holiday were limited. Some companies have begun to restock for the National Day holiday without significant impact from power rationing. As such, inventories in the region continued to decline.

Inventories in Guangdong increased at one point, and fell this past week. Affected by the power rationing, local demand weakened noticeably. But arriving shipments did not increase.

We expect that the inventory will fall next week in view of downstream pre-holiday stockpiling and the absence of significant increase in supply. Pay attention to whether the impact of power rationing across China will expand after the holiday. The inventory may gradually increase once the impact is significant.

Copper inventories in the domestic bonded zones decreased 18,200 mt from September 17 to 262,300 mt as of Friday September 24, according to the most recent SMM survey.

SMM data showed that China's social inventories of aluminium across eight consumption areas rose 23,000 mt on the week to 789,000 mt as of September 23. Increases were mostly contributed by Wuxi, Nanhai and Gongyi. 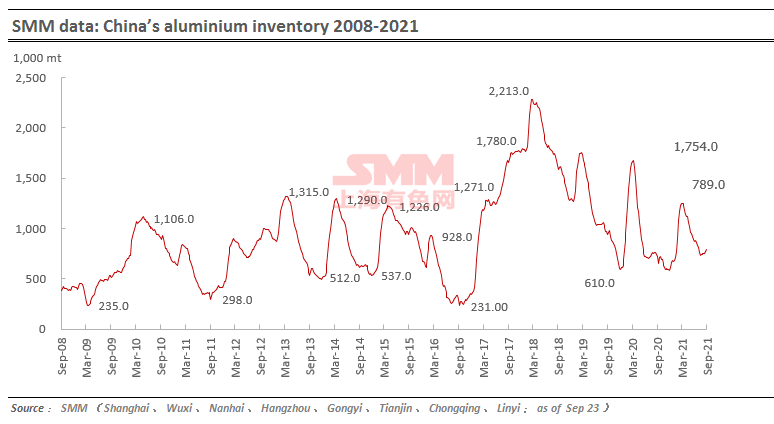 The stocks of aluminium billet in five major consumption areas rose by 8,200 mt to 157,000 mt on Thursday September 23 from the previous week, an increase of 5.48%.

Four major consumption areas have reports increasing inventories, with Huzhou and Changzhou being the leading contributors. The inventory in Huzhou rose 4,000 mt or 36.36% on the week, and Changzhou saw an increase of 2,900 mt or 22.31%. The only decline was found in Wuxi by 700 mt. The broad increase among inventories was mainly caused by sluggish demand amid Mid-Autumn Festival holiday.

Looking forward, the demand from downstream aluminium extruders were still lacklustre. Furthermore, the power rationing has been intensifying in Guangdong, and some companies were only allowed to operate for 2 – 1 or even 0 days in a week. While some companies in Jiangsu have also suspended production on power rationing. As such, the social inventory of aluminium billet is expected to climb further. 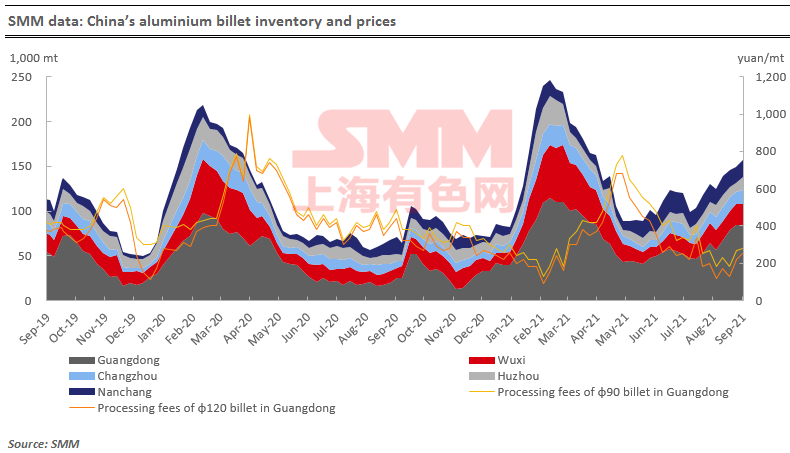 Inventories in Shanghai increased sharply as arrivals of goods at smelters increased during the Mid-Autumn Festival and downstream demand weakened. Guangdong saw an increase in stocks amid normal arrivals of goods and muted downstream demand on power rationing. Inventory in Tianjin fell slightly as logistics restrictions caused in-plant overstocks at smelters and the arrivals of cargoes were less than expected on suspension of production at individual smelters.

Southern Chinese ports saw significant increases in inventories this week. NPI output in South China regions like Guangxi and Guangdong remained low due to the great impact from power rationing. Weaker demand has resulted in stock accumulation of nickel ore at ports, even with no significant increase in arriving shipments at ports. Domestic nickel plate consumption was strong this week. Spot cargoes in the domestic bonded areas continued to be transferred into the domestic market. However, the inflow of spot cargoes this week was relatively limited due to the closing of the import window.

The current domestic inventory is at a low level. Consumption remains promising in view of low prices. This, combined with the opening of the import window, is expected to move spot pure nickel inventory into the domestic market from the bonded zone. In this scenario, inventory in the bonded zone is likely to maintain the downward trend.

Social inventories of silicon metal across Huangpu port, Kunming city and Tianjin port increased 6,000 mt from the previous week to 52,000 mt as of Friday September 24.

The market trade was sluggish due to the high prices. The shipment arrivals were higher than the deliveries at ports, and some warehouses were operating at full capacity. The inventory in Kunming increased normally. The silicon metal social inventory is expected to stand flat next week.

The lead prices kept falling sharply in the domestic and overseas markets after the Mid-Autumn Festival holiday. The losses of the lead smelters expanded. Both primary and secondary lead smelters held back cargoes, and some smelters offered quotations at premiums. The premiums of secondary refined lead stood at 0-100 yuan/mt over the average SMM #1 lead price.

The downstream companies maintained purchase for the restocking on rigid demand, and some companies made purchase at lower prices. Hence the increase in the social inventory of lead ingots slowed down amid the market consumption.

The intensified power rationing in Anhui, Guangdong, Hunan, and other regions will restrict the production in local primary and secondary lead smelters. The downstream users are expected to restock before the National Day holiday, and the lower supply may cause the decline in the social inventory of lead ingots.

Operating Rate of Primary Lead Smelters Down 5.88% on Week

The average operating rate across primary lead smelters in Henan, Hunan and Yunnan provinces lost 5.88 percentage points from the previous week to 56.30% in the week ended September 24, an SMM survey showed.

Operating Rate of Licensed Secondary Lead Smelters Down 4.18% on Week

The operating rates across licensed smelters of secondary lead in Jiangsu, Anhui, Henan and Guizhou averaged 56.02% in the week ended September 24, down 4.18 percentage points from the previous week, an SMM survey showed.

The operating rates fell significantly mainly due to the falling lead prices and the reduced or suspended production in the secondary refined lead smelters amid wider losses. The large-scale secondary lead smelters also reduced output slightly amid the power rationing. The smelters in Anhui received the notice to cut the production by 20-30%. Huabo, Chilwee, Dahua and other companies started to control the power consumption, and the output declined. Jiangsu New Chunxing also lowered the operating rate due to the power rationing and lower lead prices.

Operating Rate of Lead-Acid Battery Plants Down 0.22% on Week

The average operating rate across lead-acid battery producers in Jiangsu, Zhejiang, Jiangxi, Hubei and Hebei provinces decreased 0.22 percentage point from September 17 to 67.93% as of Friday September 24.

According to SMM survey, some lead-acid battery plants took a one-day holiday for the Mid-Autumn Festival this week. The power rationing intensified after the holiday, especially in Jiangsu, Guangdong, and Anhui, where the power consumption was required to be reduced by 20-40%. Most companies started to lower the operating rates since September 23.

The power rationing will extend until September 30, so the operating rates are expected to decline further next week.