CST
Source:SMM
This is a roundup of China's metals weekly inventory as of September 17.

SHANGHAI, Sep 17 (SMM) - This is a roundup of China's metals weekly inventory as of September 17.

SMM data showed that China's social inventories of aluminium across eight consumption areas rose 15,000 mt on the week to 766,000 mt as of September 16. Increases were mostly contributed by Wuxi, Nanhai and Gongyi. 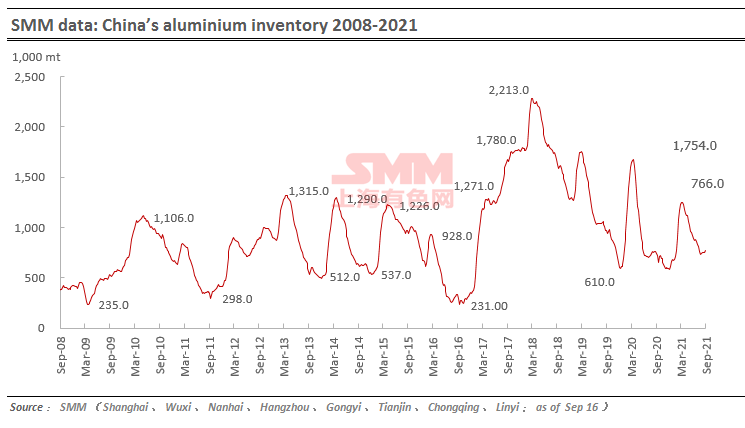 Aluminium Billet Inventories Up to 148,800 mt on Week

The stocks of aluminium billet in five major consumption areas rose by 3,300 mt to 148,800 mt on Thursday September 16 from the previous week, an increase of 2.3%.

The increase was mainly contributed by Foshan and Wuxi, with a weekly increase of 6.2% (4,900 mt) and 11.34% (2,400 mt), respectively. The inventories in Changzhou and Nanchang fell by 2,000 mt, respectively, and Huzhou remained unchanged. The aluminium prices experienced wild volatility this week, and the downstream largely took a wait-and-see attitude. Market activities in Guangdong were mostly arrivals of goods, leading to the increase in aluminium billet inventory.

Looking forward, the demand of aluminium extrusion plants were still sluggish according to SMM, and most medium and small plants reported shrinking orders. Meanwhile, news was spreading over the market that downstream producers in Guangdong and Jiangsu were required to implement off-peak production amid power rationing, and the demand of aluminium billet is likely to fall. Nonetheless, a few plants will re-stock ahead of the Mid-Autumn Festival, though the overall demand for restocking was lackluster. As such, the social inventory of aluminium billet is likely to stay unchanged in the following week. 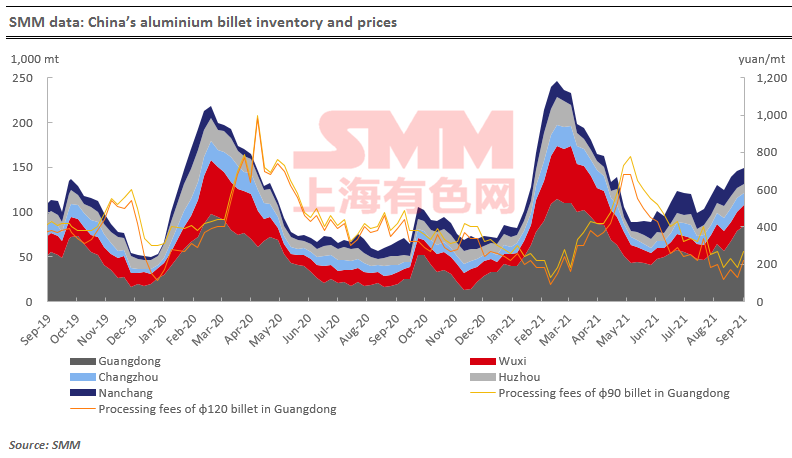 Copper Inventory in Major Chinese Markets Plunged 11,200 mt on Week to Lowest for the Year

The downstream stockpiling demand ahead of the Mid-Autumn Festival is the main driver for the decrease in inventory.

Inventory is expected to continue to decline next week, but the decline may be smaller. It is necessary to pay close attention to the impact of power rationing in Jiangsu on downstream copper semis processing enterprises.

SMM understood that only some enterprises will cut output as a result, while most enterprises said that the impact is not significant for the time being.

Copper inventories in domestic bonded zones decreased 24,800 mt from September 10 to 280,500 mt as of September 17, according to SMM survey.

The speed of the inventory decline has slowed down. Due to the impact of the typhoon at the beginning of the week, the Shanghai bonded warehouses suspended their inbound and outbound operations. After operations resumed, bonded zone inventories continued to fall as the recent spot import profits were still prompting traders to make customs declarations. Inventories in Shanghai increased as government stockpiles arrived at plants and downstream producers reduced restocking. Guangdong saw a slight decline in stocks as downstream buyers will restock cargoes before the Mid-Autumn Festival holiday.Stocks in Tianjin fell sharply as in-plant cargoes at smelters have overstocked due to logistics restrictions, arrivals of goods in the market were muted on suspension of production at individual smelters as well as downstream plants have pre-holiday restocking demand.

The social inventory of silicon metal across Huangpu port, Kunming city and Tianjin port decreased 2,000 mt from the previous week to 5,000 mt as of Friday September 17.

The arrivals at ports did not increased significantly, and the inflow and outbound volumes were average. The overall inventory at Huangpu and Tianjin Port stood basically flat on the week. Silicon transactions declined in Kunming as plants held back cargoes under the dual control of energy consumption, and the social inventory in Kunming declined. There may be intensive deliveries near the Mid-Autumn Festival holiday and National Day holiday. The social inventory of silicon is expected to increase next week.

The delivered cargoes early this week continued to flow into stocks. Shipments at primary lead and secondary lead smelters declined sharply as lead prices continued to weaken in the second half of the week, during which discounts of secondary lead shrank. Some secondary refined lead was quoted with flat against SMM #1 lead average price, almost no price difference with refined lead. Downstream producers began to properly restock primary lead while lead stocks in some warehouses fell slightly. The increase of the overall inventory slowed from early this week.  In addition, the secondary lead smelters will maintain a slight loss next week, and the new production capacity is about to be released soon. In-plant stocks of lead ingots are expected to increase first, followed by social warehouse, due to the Mid-Autumn Festival holidays.

Operating Rates of Primary Lead Smelters Down 0.06% on Week

Operating rates across primary lead smelters in Henan, Hunan and Yunnan provinces lost 0.06 percentage point from the previous week to 62.18% in the week ended September 17, showed an SMM survey.

Production in Henan was basically stable this week. Hunan Shuikoushan Jinxin’s daily output was reduced to normal, Yinxing’s production was slightly affected by the power rationing due to the insufficient local rainfall, Mengzi Mining and Metallurgy increased production as planned after resumption, and Chifeng Shanjin resumed production from the equipment failure in end-August.

Jiangxi Jinde and Shuikoushan will conduct maintenance in October.

Operating Rates Across Licensed Smelters of Secondary Lead Down 0.91% on Week

Operating rates across licensed smelters of secondary lead in Jiangsu, Anhui, Henan and Guizhou averaged 60.2% in the week ended September 17, down 0.91 percentage point from the previous week, showed an SMM survey.

Operating Rates of Primary Lead Smelters Down 0.06% on Week

Operating rates across lead-acid battery producers in Jiangsu, Zhejiang, Jiangxi, Hubei and Hebei provinces stood largely flat at 69.94% on the week as of Friday September 17.

According to SMM survey, end consumption in the lead-acid battery market was largely unchanged. The replace demand for the batteries of electric bicycles and automobiles was flat, so dealers were mostly selling stocks. However, companies of energy storage batteries received abundant orders. Some companies scheduled production on orders, and most companies maintained high operating rates. This production schedule may extend to Q4 this year.

SMM will continue to monitor the consumption of electric tricycles during the traditional peak season from September to October.

Affected by the sharp reduction in stainless steel output in China this past week, the domestic nickel price trended lower this past week. This combined with big import profits drove large influx of imported nickel. As such, the SHFE/LME nickel price ratio fell rapidly.

Nonetheless, there was still an inflow of 1,600 mt of pure nickel into the bonded area, most of which was spot cargoes. The current quotes for imported nickel are still limited in the market.

The reduction in stainless steel output will intensify next week, and the marginal demand for pure nickel will decrease. However, due to the current decline in pure nickel inventory in China, it is expected that the nickel price ratio will rebound in the future.

Output of medium-grade and high-grade NPI is expected to fall 12,800 mt with Ni content on the month in September, a month-on-month decline of 31%. Therefore, the consumption rate of nickel ore has slowed down.

If production restrictions are further implemented, the current supply tightness of nickel ore may be eased. Port inventory is expected to accumulate. All
MOST POPULAR
1.China Weekly Inventory Summary and Data Wrap (Jan 20)
2.Molybdenum Prices Hit a 17-Year High with Persistent Tight Supply
3.SMM Review of China's Metals Market during CNY Holiday and Forecast
4.The IMF Raises Its Global Economic Growth Forecast for 2023, with China Leading the Way
5.Social Inventory of Silicon Metal Remained Stable amid the Cold Market during the CNY Holiday
Shanghai Metals Market
Privacy PolicyCompliance CentreSMM Credit ServiceContact UsAbout UsTerms & ConditionsSitemap
Notice: By accessing this site you agree that you will not copy or reproduce any part of its contents (including, but not limited to, single prices, graphs or news content) in any form or for any purpose whatsoever without the prior written consent of the publisher.