CST
Source:SMM
This is a roundup of China's metals weekly inventory as of August 27.

SHANGHAI, Aug 27 - This is a roundup of China's metals weekly inventory as of August 27.

Copper inventories across major markets in China fell 8,500 mt from Monday to 134,500 mt as of Friday August 27, according to SMM data.

Shanghai and Guangdong drove most of the inventory decline. Arriving shipments of domestic copper increased in Guangdong as electricity restrictions eased, and imported copper supply also increased. But shipments from Guangdong were higher. The recent sharp drop in the price spread between copper cathode and copper scrap boosted copper cathode consumption.

Copper inventories in the Shanghai bonded zone decreased 23,400 mt from August 20 to 345,100 mt as of Friday August 27, the seventh straight week of decline.

The import window opened in the past two weeks. And cargoes booked under warrants amid import profits were imported after customs clearance. This caused bonded zone inventory to fall further.

SMM data showed that China’s social inventories of aluminium across eight consumption areas rose 12,000 mt on the week to 753,000 mt as of August 26, with Gongyi contributed the largest share, on the back of increasing arrivals of cargoes. Inventories in Wuxi declined further while stocks in Nanhai stabilised. 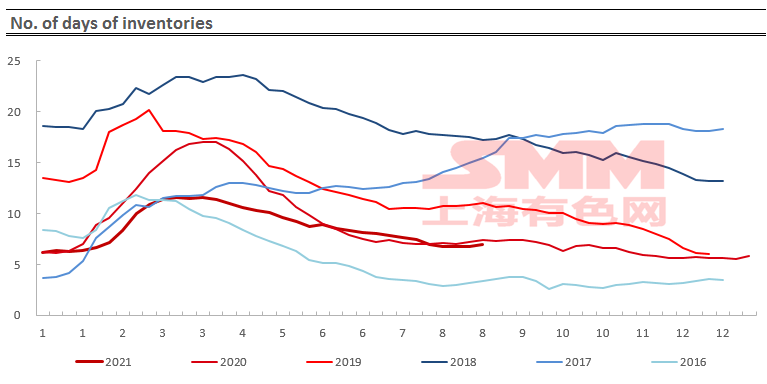 SMM data showed that China’s social inventories of aluminium billet across five major consumption areas fell 6,200 mt on the week to 124,400 mt as of August 26, mainly due to the decline in Foshan, Wuxi and Nanchang.

Downstream producers properly restocked cargoes due to high aluminium prices and bearish orders, thus, the demand for aluminium billet declined. Aluminium billet inventories are expected to be muted next week as the arrivals of goods were not high. 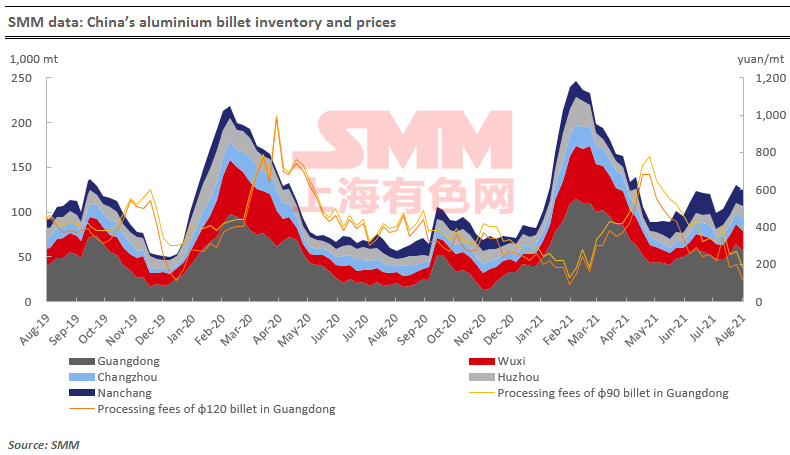 Inventories in Shanghai fell slightly as the inflow of imported zinc declined and downstream producers properly restocked cargoes. Stocks in Guangdong continued to increase amid rising arrivals of cargoes on loose power curtailment at smelters. Tianjin saw a decrease in stocks as individual smelters in Inner Mongolia suspended production and traders delayed taking deliveries due to discounts of over 100 yuan/mt against Shanghai. Inventories in Shanghai, Guangdong and Tianjin fell 2,000 mt, and inventories across seven Chinese markets decreased 2,400 mt.

Operating Rates of Secondary Lead Smelters Down 0.85% on Week

Operating rates across licensed smelters of secondary lead in Jiangsu, Anhui, Henan and Guizhou averaged 64.17% in the week ended August 27, down 0.85 percentage point from the previous week, showed an SMM survey.

The transportation of battery scrap in Henan was hindered due to the spreading pandemic in Zhengzhou, and secondary lead smelters had difficulties in purchasing battery scrap. At the same time, the secondary refined lead smelters continued to suffer losses amid low lead prices, so they were less willing to restock raw materials, which affected the normal production. Some plants reduced production, which dragged down the overall operating rate.

The fourth batch of the second round of central environmental inspections has been launched, leading to the slight decline in the production of some smelters in Guangdong. Several small plants in Hubei suspended production for maintenance due to the equipment failure and poor shipments.  Some small smelters in Jiangxi also reduced production due to the low shipments.

The output of Henan Yongxu gradually increased after it was put into production, which made up for part of the output reduction from other regions.

Supply of lead-acid battery scrap is expected to remain tight next week, and the overall output of secondary lead may be flat on the week.

Social inventories of lead ingots across Shanghai, Guangdong, Zhejiang, Jiangsu and Tianjin expanded 1,100 mt from last Friday August 20 to 199,500 mt as of August 27. This was down 500 mt from Monday August 23.

The supply of secondary lead loosened. With the recovered profits, the discounts of secondary refined lead quotations expanded to 300 yuan/mt (ex-factory) over the average price of SMM #1 lead, which diverted part of the rigid demand. The increase in the social inventories of lead ingot slowed down from the previous week.

Operating Rates of Lead-Acid Battery Plants Up 0.06% on Week

Operating rates across lead-acid battery producers in Jiangsu, Zhejiang, Jiangxi, Hubei and Hebei provinces inched up 0.06 percentage point from August 20 to 69.72% as of Friday August 27.

Lead-acid battery market was in the traditional peak season, and the replacement demand for electric bicycles is rising steadily. Major companies gradually increased production since August.

The battery production and transportation in some key areas in Jiangsu were still restricted as the pandemic control has not been lifted, and the battery sales were also stagnated. However, the orders in other areas in Jiangsu increased, including some transferred orders. The consumption of automobile battery remained flat, and some companies reduced production.

Operating Rates of Primary Lead Smelters Up 2.19% on Week

Operating rates across primary lead smelters in Henan, Hunan and Yunnan provinces gained 2.19 percentage points from the previous week to 61.6% in the week ended August 27, showed an SMM survey.

In Henan, Wanyang slightly increased production as planned this week, and Xinling resumed normal production, with a slight increase in the refined lead output. Yunnan Hongqian finished the restocking of raw materials, and cancelled maintenance to maintain production. Anhui Tongguan fully recovered production. The operating rates of primary lead in Yunnan and Hunan stood largely unchanged after the recovery from power curtailment. Xing’an Silver and Lead in Inner Mongolia started maintence in the mid-week, which is expected to last about 25 days. The production decreased slightly this week.

SMM statistics showed that the social inventories of silicon metal in the three major regions in China totalled 48,000 mt on August 27, an increase of 2,000 mt from a week ago. Cargoes quickly flowed into and out of two main ports in north and south China, leaving inventory basically flat. Inventory in Yunnan continued to grow in the rainy season, but the growth rate was relatively low. The total social inventory fell by 25% year-on-year and fell short of expectations.

Social inventory is expected to continue to grow slightly next week.

The import window opened as the SHFE/LME nickel price ratio improved amid stronger domestic demand and this drove continued inflows of nickel plate and nickel briquette from bonded zone inventories.

Affected by the pandemic, cargoes were stranded at ports for a longer period. And this slowed growth in port inventory. The current port inventory level remains low, which is basically the same as that of March. 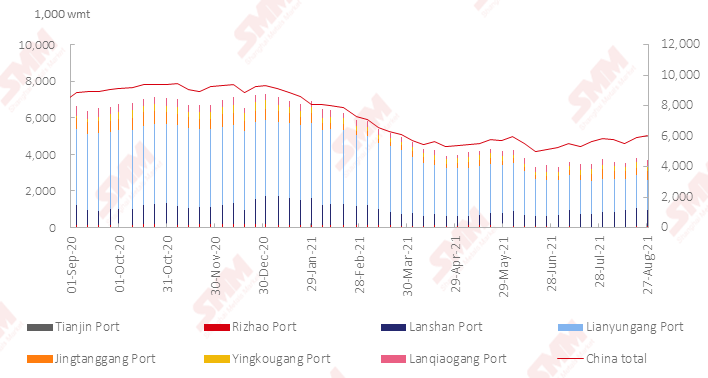 Operating Rate of Lead-Acid Battery Plants Down 0.22% on Week
The average operating rate across lead-acid battery producers in Jiangsu, Zhejiang, Jiangxi, Hubei and Hebei provinces decreased 0.22 percentage point from September 17 to 67.93% as of Friday September 24.

MOST POPULAR
1.Exclusive: China's Metals Output in December
2.China Weekly Inventory Summary and Data Wrap (Jan 7)
3.China Weekly Inventory Summary and Data Wrap (Jan 14)
4.Silicon Metal Prices Dropped amid Weak Supply and Demand
5.Will the Rainstorm in Brazil Shore up Manganese Ore Prices?
Shanghai Metals Market
Privacy PolicyCompliance CentreSMM Credit ServiceContact UsAbout UsTerms & ConditionsSitemap
Notice: By accessing this site you agree that you will not copy or reproduce any part of its contents (including, but not limited to, single prices, graphs or news content) in any form or for any purpose whatsoever without the prior written consent of the publisher.