The COVID-19 pandemic eased in east China, where the social inventories dropped significantly amid the recovered transportation and high restocking demand by end users. The social inventories in central and south-west China increased slightly, and the stocks in other regions across the country all fell. 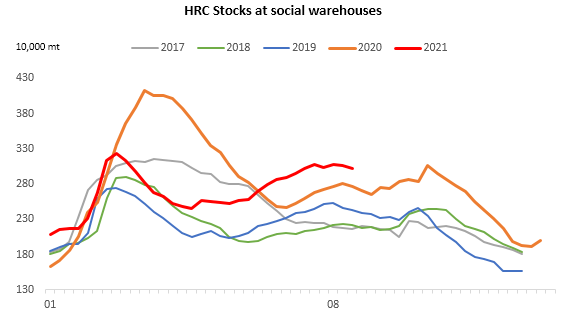 The logistics were smooth in most regions amid the alleviated pandemic impact, and steel mills were actively shipping goods. The stocks in plants were transferred more rapidly to social warehouses, especially in east China. The inventory decline was significant in the plants in north-east China due to the maintenance. HRC inventories declined amid rebounding end demand this week. According to SMM survey, the HRC output affected by maintenance is expected to be 1.06 million mt in September, up 92,000 mt from August. HRC output is likely to remain low.

On the demand side, the production in automobile industry is limited due to the chip shortage. The purchasing intentions of industries such as home appliances and machinery have not improved significantly, and the downstream has a weaker acceptance of high prices. The supply and demand of HRC is expected to remain low in the short term, and the downward room for inventories will be limited.

HRC, plates output to rise 4.75% in December as mills recover from maintenance
Chinese steelmakers plan to produce 9.29 million mt of hot-rolled coils and plates in December

HRC inventories extended decline, but steelmakers recovered from maintenance
Stocks decreased by 2.6% from a week ago to 2.99 million mt as of Oct 31

All
MOST POPULAR
1.Exclusive: China's Metals Output in September
2.Stainless Steel Prices May Rise Steadily in October
3.Domestic Iron Ore Prices Are Likely to Trend Lower amid Weak Demand
4.The Traded Electricity Prices in Jiangsu Moved up 19.94% in the First Day of New Electricity Tariff
5.China’s Stainless Steel Output Dropped to a New Low within the Year in Sep
Shanghai Metals Market
Privacy PolicyCompliance CentreSMM Credit ServiceContact UsAbout UsTerms & ConditionsSitemap
Notice: By accessing this site you agree that you will not copy or reproduce any part of its contents (including, but not limited to, single prices, graphs or news content) in any form or for any purpose whatsoever without the prior written consent of the publisher.