In terms of events, the Fed Chairman Powell will deliver a speech on August 18; the Fed's FOMC will announce the minutes of the monetary policy meeting on August 19. 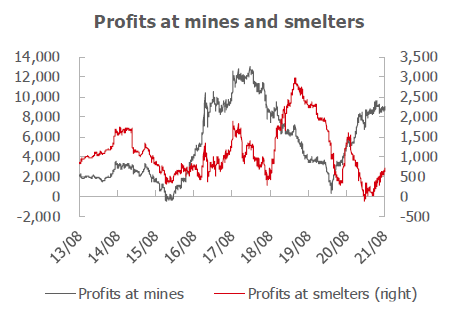 Power curtailment in Guangxi tightened in early August, but is likely to alleviate slightly in late August amid heavy rainfall. The affected output is in line with the previous forecast.

Some companies have reported that government stockpiles have arrived last week. However, the limited deliveries of zinc ingots in some high-risk areas of pandemic infections will affect the time of arrival. The third round of selling government stockpiles remains as the market focus. There were rumours that the tariff policy will be adjusted again in August, and some steel products will be levied export tariffs of 10-20%, which will hit the forward orders of galvanised sheet and plate.

Zinc prices are unlikely to decrease sharply before the removal of power curtailment. The most-traded SHFE contracts prices are expected to stand at 22,000-23,000 yuan/mt this week, spot premiums of Shanghai zinc stood at 130-180 yuan/mt over the September contract.

Growing Supply Weighs On Lead Prices in September, Restocking for National Day Holiday About to Start
Lead futures registered a significant monthly decline by 6.6% in August. As of August 31, the most traded SHFE lead contract closed at 15,025 yuan/mt, a decrease of 1,065 yuan/mt during the month.

Copper Prices to Stay Volatile at High Levels in Aug
SHFE Copper kept fluctuating in July after June’s fall back. The overall prices stood above 68,000 yuan/mt in early July, and gained 5.23% on the month. The spot prices of SMM #1 copper cathode rose 4.64% on the month.

Nickel Prices to Stand High amid Supply Shortage in August
Nickel prices fluctuated higher in July and reached a new high at 148,780 yuan/mt since February this year. Nickel futures closed at 146,900 yuan/mt on July 31, up 8,840 yuan/mt or 6.4% from the end of June.

Prices of praseodymium, neodymium, terbium, dysprosium rose, bullish sentiment grew in the market
The rare earth market was generally stable last week with slight fluctuation in praseodymium and neodymium, terbium, and dysprosium. Separation plants held quotations high, and were less willing to ship good. Inquiries of metal plants and magnetic materials plants was flat, and transactions were scarce amid the overall wait-and-see sentiment.