Background: In recent years, new energy vehicles have developed rapidly, especially since the second half of last year, the demand has increased significantly, which result in the shortage of raw materials. Among that, cobalt, nickel and lithium resources are insufficient, and prices have risen sharply. In the long run, the cobalt, lithium, nickel raw materials will be in a tight balance in the next 5 years. For lithium batteries, which account for a relatively large material cost (occupies 85%), it will be difficult to reduce the cost in the next 5 years, which will put greater pressure on batteries and car companies.

The battery cell can achieve 3000-6000 , which is significantly higher than that of LCO and NCM battery cell. The life cycle is different in different scenarios, and the cycle will be longer with water cooling systems. It is expected to be more than 8,000 times in the future which is to LFP battery life cycle. 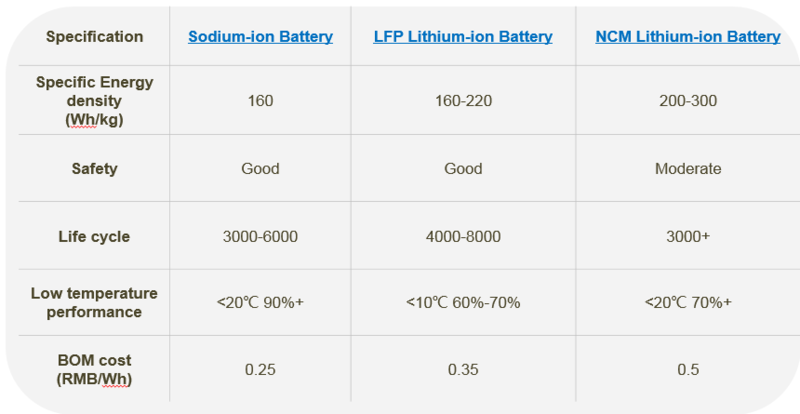 At present, the batteries energy storage market mainly use LFP battery and lead-acid battery. Lithium-ion battery are gradually replacing lead-acid batteries because of their high cycle life, safety and cost performance. From the perspective of cycle life, sodium-ion battery with more than 3,000 times can be used in 5G base stations, and their price may be lower than LFP batteries in 2025, or gradually replace LFP battery in 2025. Large energy storage (such as wind power photovoltaics, etc.) has higher requirements for life cycle, which is basically about 8,000 times, and its , or it is more inclined to use LFP battery with higher cycle life.

In conclusion, Sodium-ion battery will be applied to scenarios that do not require high energy density, but require cost-efficient and higher life cycle, such as energy storage，light electric vehicles, low-to-medium level new energy vehicles and construction machinery. It will not be able to replace the lithium-ion battery for a considerable period of time in the future, and it will be complementary to the lithium-ion battery.

CATL Will Form a Basic Industrial Chain of Sodium-Ion Battery by 2023
An investor asked on the interactive platform of CATL on December 20: "What stage is CATL's research on sodium-ion batteries currently at? Are there any breakthroughs? Will sodium-ion batteries gradually replace lithium batteries? "

Central Government to Support Development of Sodium-ion Batteries
The Ministry of Industry and Information Technology (MIIT) mentioned in its recent reply to the Proposal on the Vigorous Development of Sodium-ion Batteries in China that, new batteries such as lithium-ion and sodium-ion are the foundation for further and in-depth development of new energy industry. MIIT will call up relevant industrial associations and academies to carry out the forming of sodium-ion battery standards in due course.

CATL Leading the Capacity Expansion of Copper Foil
CATL has announced a fixed increase plan of 58.2 billion yuan to expand production. At the same time, the copper foil industry, which is the midstream link of lithium batteries, is also booming rapidly.

All
MOST POPULAR
1.CATL Unveils CTP3.0 "Qilin" Battery, Which Holds 13% More Power than 4680 Battery
2.Natrium Energy Signed a Contract of 80,000 mt of Sodium-Ion Battery Cathode Material Project, Further Accelerating the Industrialisation
3.Lithium Carbonate Supply-Demand Balance Expected to Return to Deficit
4.Lithium Carbonate Prices to Climb Further
5.A Detailed Analysis of the Reasons Why Cobalt Salt Prices Stopped Falling
Shanghai Metals Market
Privacy PolicyCompliance CentreSMM Credit ServiceContact UsAbout UsTerms & ConditionsSitemap
Notice: By accessing this site you agree that you will not copy or reproduce any part of its contents (including, but not limited to, single prices, graphs or news content) in any form or for any purpose whatsoever without the prior written consent of the publisher.