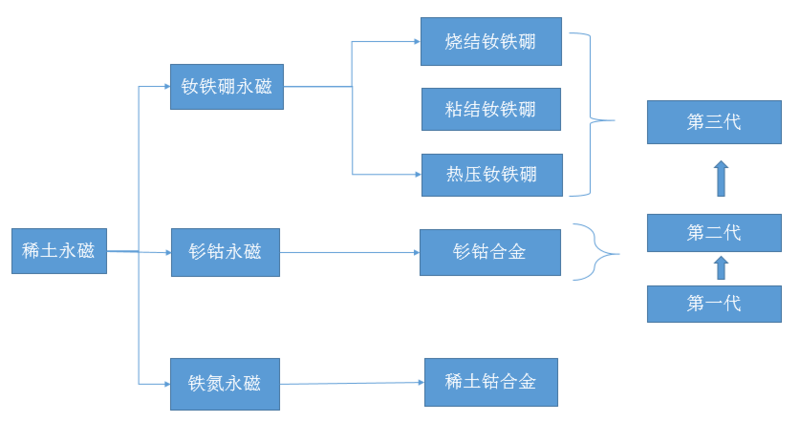 The production of NdFeB magnetic materials in the world is concentrated in China and Japan, and the output of sintered NdFeB is the largest.

According to the China rare Earth Industry Association, the total output of rare earth magnetic materials in 2019 was about 180000 tons, and Ningbo contributed about 38.9% of the total production of rare earth permanent magnet materials. Zhejiang, Shanxi, Shandong, Inner Mongolia. According to the intrinsic coercivity, NdFeB magnetic products are usually divided into seven categories: n series, M series, H series, SH series, UH series, EH series and TH series. Zhejiang, which has the largest label, accounts for about 38.7%, less than 40%.

Neodymium-iron-boron permanent magnet material is a permanent magnet material based on intermetallic compound Re2 alloy 14B. The main components are rare earth element neodymium (Nd) 29% Mel 32.5%, iron (Fe) 63.9% Mel 68.7%, non-metallic element boron (B) 1.1% Mel 1.2%. In order to obtain some neodymium with different properties, dysprosium (Dy), praseodymium (Pr) and other rare earth metals such as dysprosium (Co) and praseodymium (Al) can be used to replace part of neodymium. The boron content is small, but it plays an important role in the formation of tetragonal crystal structure intermetallic compounds, so that the compounds have high saturation magnetization, high uniaxial anisotropy and high Curie temperature. The maximum magnetic energy product (BH) max and the remanent Br, intrinsic coercivity HcJ, magnetic induction coercivity HcB are required and distinguished according to the different grades of the intrinsic coercivity HcJ.

In recent years, the demand for wind power generation and new energy vehicles has increased rapidly, which puts forward higher requirements for the coercivity and temperature stability of NdFeB permanent magnet materials, which are required to work above 200 ℃. Increasing the amount of dysprosium can significantly improve the coercivity and temperature stability of the materials.

The traditional element addition method is added in the melting process, that is, Dy is melted together with Nd, Fe, B and other elements. In the final magnet, there is Dy distribution in both the grain boundary and the main phase in the grain. However, some studies have shown that Dy at the grain boundary plays the most significant role in improving the coercivity.

Japan first put forward the concept of "grain boundary diffusion". They adopted a special process to make Dy exist only in the grain boundary but not into the grain, which not only improved the properties of NdFeB materials, but also greatly reduced the total amount of Dy elements and reduced the cost of materials.

Rare earth industry association data show that: at present, both the global market and the domestic market, rare earth permanent magnet materials show a low-end supply oversupply, high-end supply shortage. Take NdFeB magnetic blank as an example, according to the data of China rare Earth Industry Association, the global output of NdFeB blank is 185000 tons in 2018, of which the output of high-performance NdFeB blank is only 48000 tons, accounting for about 26%. China's NdFeB blank production of 157000 tons, of which high-performance NdFeB blank production is only 23000 tons, accounting for about 15%.

From the perspective of exports to major trading partners, a large number of China's rare earth permanent magnet products have been exported to Europe, the United States and East Asia, most of which are developed countries with a high level of science and technology. Taking the export data in 2020 as an example, the top five countries are Germany (15%), the United States (14%), South Korea (10%), Vietnam and Thailand.

Affected by the trade conflict between China and the United States from 2018 to 2019, the export volume of magnetic materials in China has declined. As mentioned earlier, China has the unique advantage of rare earth resources in the development of rare earth permanent magnet materials, which promotes the rapid development of China's rare earth permanent magnet material industry in recent years, relying on the advantage of low cost and low pricing occupies most of the market share in the world. however, this has also led to a certain degree of overcapacity, forming a buyer's market. Under this market background, in the process of bidding and selling of Chinese rare earth permanent magnet material enterprises in the international market, the buyer suppresses the price by comparison, and there is also a bidding situation among domestic enterprises, which finally leads to the transaction price on the low side and may even be lower than the cost price, resulting in damage to the interests of the enterprise. Competitive export also exists in lanthanum and cerium products. Previously, it was thought that China was also subject to great restrictions on patents. According to the Ministry of Commerce, because Hitachi Metal has applied for a NdFeB patent in the United States, Chinese enterprises can only have their patent authorization. in order to export products to the United States market without Hitachi metal patent authorization of Chinese rare earth permanent magnet products can not be exported to the United States and other designated countries. However, according to industry insiders, at present, many patents have expired, and the main question is whether they can make products that meet customer requirements.

At present, the downstream demand of rare earth permanent magnets continues to increase. Cars are the largest consumer downstream of high-performance NdFeB, accounting for as much as 50%. Since the beginning of this year, the demand for cars has continued to rise, driving the demand for rare earth permanent magnets. In addition, the output of industrial robots and elevators in China is expected to continue to rise. There are broad prospects for the development of the elevator industry in the future, which is mainly reflected in two aspects: first, from the perspective of building stock, urbanization and aging promote the renewal and installation of elevators in existing buildings; second, from the perspective of building increment, elevators have become standard for new houses. In terms of air conditioning, global warming brings great prospects for the European air conditioning market. The air-conditioning penetration rate is 90% in the United States, 89% in Japan and 60% in China, while it is only 4% in Europe. According to data from the International Energy Organization, there will be 110 million air conditioners installed in Europe in 2019, and that number will reach 275 million by 2050.

Multi-product prices of rare earth fluctuated downward
According to SMM survey, holders held prices firm and traders restocked as required on dips. Most of them believed that the current rare earth market was corrected, and held a positive outlook.