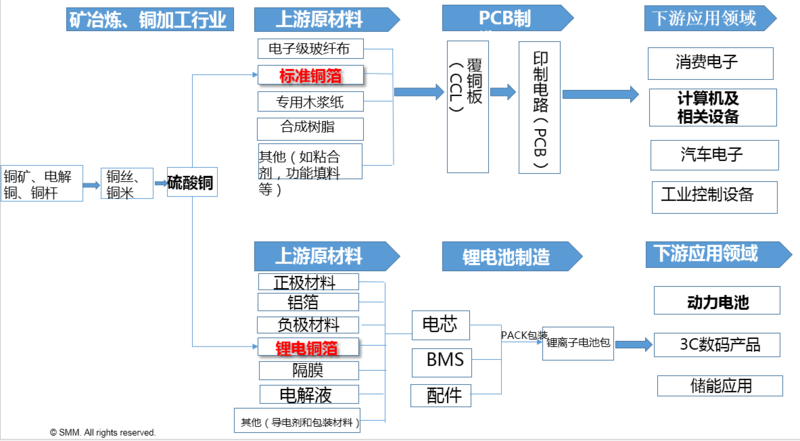 Standard copper foil is the upstream material for making copper clad laminate and printed circuit board, and its main function is to act as a wire for the interconnection of electronic components. Used in consumer electronics, computers and related equipment.

In 2020, the output of lithium electricity in China is about 150000 tons, accounting for 31% of the total output of electronic copper foil. China's output of lithium copper foil increased by more than 100000 tons from 50, 000 tons in 2015 to 153000 tons in 2020, with a compound annual growth rate of 25.06 percent. From the perspective of product structure, the proportion of standard foil is still as high as 69%, showing a downward trend year by year, while the proportion of lithium copper foil is increasing year by year.

Since the introduction of 6 μ m copper foil in the Ningde era in 2018, the proportion of 6 μ m has continued to rise, from about 14% in 2017 to 45% in 2021, and has become the mainstream specification in the industry. 4.5 mu m has been available for mass use since last year, with an average monthly consumption of more than 300 tons in the industry. Jiayuan Technology, Nord shares, Copper Crown Copper foil and other enterprises have achieved mass production of 4.5 μ m copper foil. According to SMM, Jiayuan 4.5 micron annual production of about 2000 tons, Nord has more than 1000 tons, including downstream Ningde era, BYD and other companies are now starting to use 4.5 micron products in bulk.

The road to the rapid development of new energy vehicles

2020 there are more than 80 million vehicles sold in the world, while there are only more than 3 million new energy vehicles in the world, and about 1.22 million in China. It is estimated that the output of new energy vehicles will be 6.1 million by 2025. From a further point, it is conservatively estimated that the sales in 2030 will reach 13.6 million. Read that the proportion of electrification in other countries is growing rapidly. In fact, it is very difficult to predict this emerging industry. Once the critical point is reached, it will grow at a base rate.

The installed capacity of carbon peak and carbon neutralization will exceed 30GW at the end of the 14th five-year Plan.

In 2020, the installed capacity of lithium-ion batteries for new energy vehicles in China totaled 63.3 GWH, an increase of 1.8% over the same period last year. From the overall performance, affected by the epidemic, the monthly installed capacity of power batteries has been in negative growth in the first half of the year, until the rapid growth can be resumed in the second half of the year. From the point of view of the installed capacity, Ningde era is the largest, head power battery system provider, BYD's battery supply is mainly, so in terms of expansion scale, it is weaker than Ningde era. According to the future planned new capacity of several major companies this year, SMM estimates that the demand for lithium-ion batteries is about 390 gigawatts for power batteries, 150 gigawatts for 3C batteries, and 60 gigawatts for energy storage.

Analysis on the Development trend of Lithium Copper foil Industry

SMM estimates that the demand for lithium copper foil will reach 540900 tons by 2025. In 20, 21 and 23 years, the nominal production capacity was higher than the demand for lithium copper foil in these three years, and there was excess capacity in all three years. It is expected that the overcapacity rate will begin to narrow from 2023, and the whole market will tend to be in a tight balance by 25 years.

On the whole, the nominal capacity of domestic copper foil is in a state of excess, and with the commissioning of new capacity and the improvement of capacity utilization, processing fees are expected to be adjusted in the future. it is estimated that by 25 years, the processing fee for 6 microns is 40,000 / ton, and that for 8 microns is 30,000 / ton.

NDRC: To further release copper, aluminium, and zinc reserves, strictly penalise price bidding
NDRC will continue to follow the deployment of the executive meeting of the State Council, work with relevant departments to strengthen the monitoring and forecast of commodity prices, organise subsequent release of copper, aluminium, zinc and other national reserves, and pay close attention to abnormal market price fluctuations.