CST
Source:SMM
This is a roundup of China's metals weekly inventory as of July 9.

SHANGHAI, Jul 9 (SMM) – This is a roundup of China's metals weekly inventory as of July 9.

Stocks of copper in Shanghai bonded areas increased on larger arrivals for the fifth consecutive week.

The repair range of terms of trade was limited this week, and the import loss of the current month's contract remained at about 300 yuan/mt, which made it difficult to provide import opportunities. The market demand for customs declaration was sluggish, and the buying activity in foreign trade market was limited. The inbound goods flowed into bonded warehouses one after another, which led to a continuous increase in copper stocks.

Stocks in Shanghai increased slightly as the arrivals of imported zinc were limited and the market mainly digested domestic zinc. In south China's Guangdong, market arrivals continued to improve and downstream demand weakened, leading to a continuous increase in stocks. Stocks in Tianjin rose sharply as downstream demand was still low and arrivals of smelters were normal.

Nickel ore inventories across all Chinese ports increased 282,000 wmt from July 2 to 5.51 million wmt as of July 9, showed SMM data.

Jingtang Port was suspended due to environmental protection problems last week, and it has now recovered, while port congestion has not been completely relieved. The ports in both the north and the south had different degrees of congestion. Nickel ore stocks increased slowly, and the recent consumption was relatively large, so the increase of nickel ore stocks was limited. 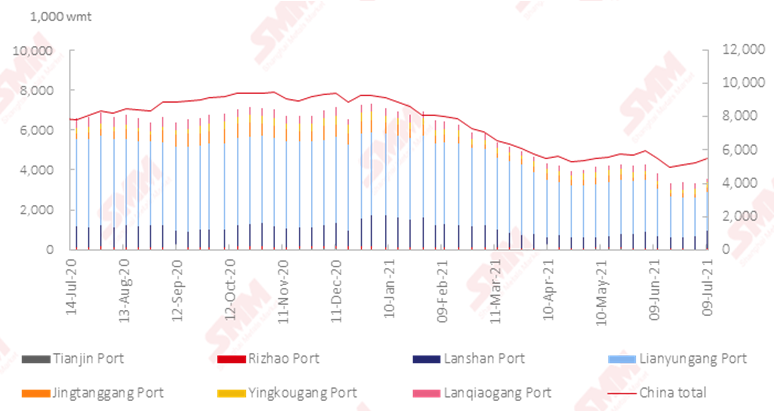 Inventories of refined nickel in the Shanghai bonded areas increased 9,000 mt from a week ago and stood at 11,200 mt as of July 9, showed SMM data.

Nearly 1,000 mt of nickel plates from LME warehouse were moved into bonded warehouse this week, but the import window was nearly opened due to the surge of SHFE nickel on Friday. It is expected that this part of the supply will flow into China one after another in the near future. It is understood that most of the goods arriving at port in the later period are LME nickel briquettes, which are likely to enter China through direct customs clearance. Shanghai bonded refined nickel stocks may be difficult to maintain the upward momentum. 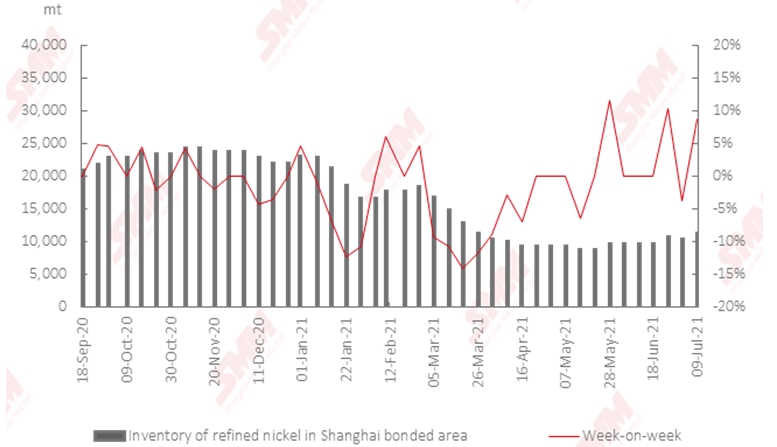 Social inventories of primary aluminium ingots across eight consumption areas in China, including SHFE warrants, decreased 18,000 mt from last Thursday to 858,000 mt as of July 8. Stocks in Wuxi continued to contribute to the decrease. 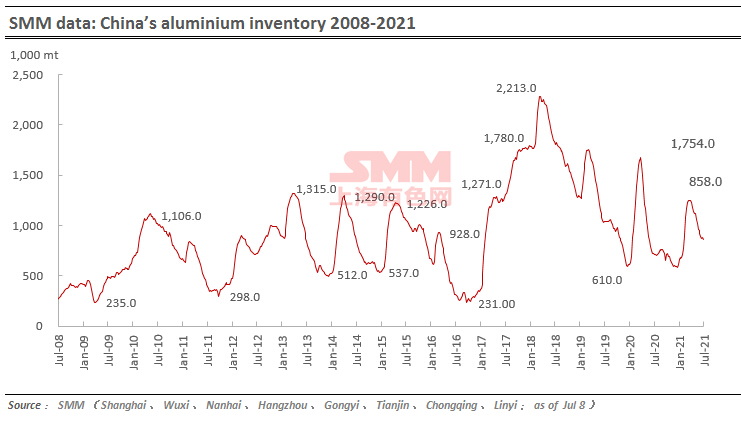 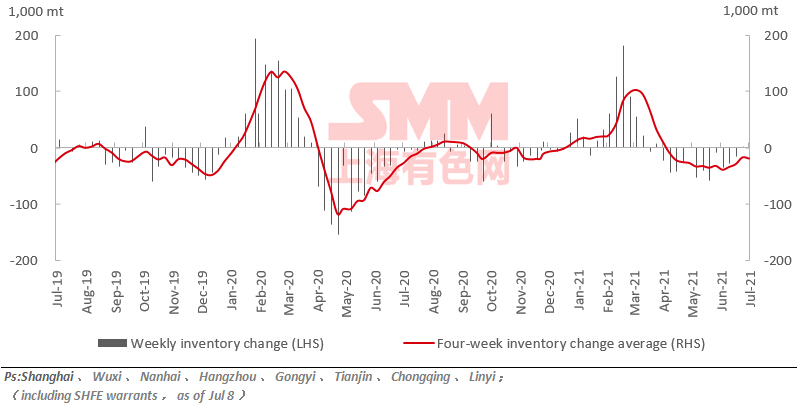 The outbound quantity of aluminium billet decreased 3,600 mt or 7% to 47,500 mt last week. The downstream was less willingness to restock under the fluctuation of aluminium prices and weak consumption.

SMM data showed that aluminium billet stocks across the five major consumption areas — Foshan, Wuxi, Huzhou, Changzhou and Nanchang — in China increased 11% or 12,600 mt from a week ago to 123,800 mt as of Thursday July 8. Stocks in Foshan, Wuxi, Changzhou and Nanchang all rose. Among whem, Wuxi area increased the most, with inventories increasing by 5,600 mt or 44%. The overall market trading atmosphere was moderate this week, and the downstream wait-and-see sentiment was aggravated. In addition, due to the impact of reserving, the overall market turnover was moderate.

SMM survey showed that the orders of downstream aluminium extrusion enterprises still showed signs of weakening. With the arrival of the traditional off-season, the consumption demand momentum of aluminium billet is insufficient. It is expected that outbound quantity of aluminium billet will decrease next week and it is more likely that aluminum billet inventories will continue to pile up. 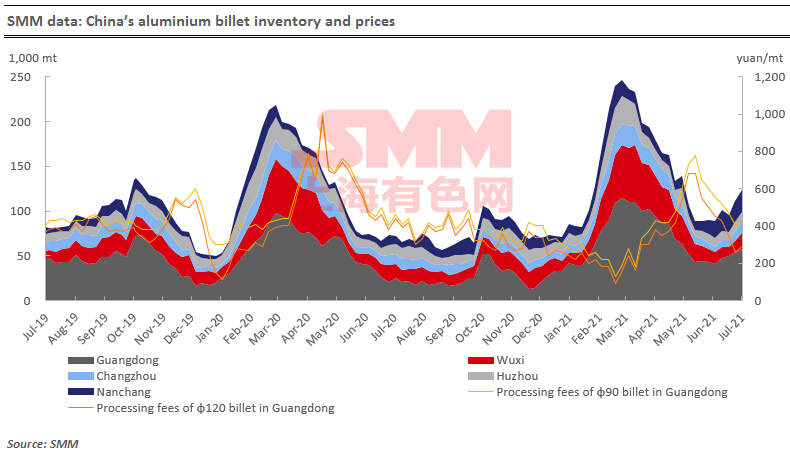 Social inventories of silicon metal across Huangpu port, Kunming city and Tianjin port expanded 8,000 mt from the previous week to 32,000 mt as of Friday July 9. The social inventories fell 17,000 mt or 34.7% from the same period last year, as the silicon plants in Yunnan postponed the production. The silicon inventories are expected to gradually increase after the large-scale plants in north China resumed production, and the operating rates in southwest China went up.

Social inventories of lead ingots across Shanghai, Guangdong, Zhejiang, Jiangsu and Tianjin increased 12,500 mt from the prior week and rose 9,600 mt from July 5 to 143,500 mt as of Friday July 9, hitting a record high since January 2015, an SMM survey showed.

The supply of primary and secondary lead increased steadily this week, but downstream consumption remained low as lead prices fluctuated at high levels. Some downstream users preferred to purchase from smelters on their rigid demand. Secondary refined lead was traded at a discount of 500 yuan/mt against the average price of SMM 1# lead. The price spread between spots and futures remained around 400 yuan/mt. Holders continued to deliver goods to social warehouses. In addition, Shanghai Futures Exchange expanded two warehouses to provide more storage capacity for later deliveries. The inventories of lead ingots are expected to keep rising next week.

Operating rates across primary lead smelters in Henan, Hunan and Yunnan provinces gained 0.11 percentage point from the previous week to 61.6% in the week ended July 9, showed an SMM survey.

Operating rates across licensed smelters of secondary lead in Jiangsu, Anhui, Henan and Guizhou averaged 57.49% in the week ended July 9, up 7.15 percentage points from the previous week, showed an SMM survey.

Dadao and other secondary lead smelters in Anhui resumed production after maintenance, driving up the operating rates by about 6 percentage points. Jiangsu New Chunxing increased production significantly after the technological transformation, and the production is likely to be further raised next week. Besides the sample companies, Jinyang, Fengri, and other plants in Jiangxi gradually resumed production after maintenance. Although some plants in Guangdong reduced production due to the high temperature, and Hubei Jinyang started the overhaul for one week, the overall operation was recovering. Anhui Dadao will further lifting operation, and Hubei Jinyang will recover production next week. The operating rates are likely to remain upward next week.

Operating rates across lead-acid battery producers in Jiangsu, Zhejiang, Jiangxi, Hubei and Hebei provinces stood largely flat at 69.01% on the week as of Friday July 9.

Lead-acid battery market is at the transitory stage from off-peak season to the peak season, but the market atmosphere has not changed obviously. The finished product inventories of electric bicycles and car batteries remained high, so the companies were still cautious in production. Recently, some companies were more active in lead-acid battery export amid higher LME lead and shrinking SHFE/LME price ratio. However, the production will not be raised until the orders increase.

Inventories of rebar across Chinese steelmakers and social warehouses stood at 11.49 million mt as of July 8, up 1.7% from a week ago. Stocks are up 7.7% from a year earlier. 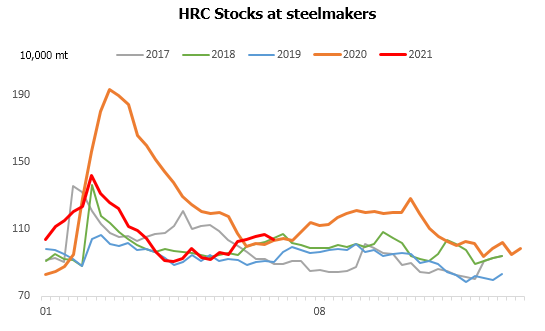 Many places across China strictly implemented production reductions, as crude steel production must not exceed the volume last year. This led to a continued decline in blast furnace operating rates. The production reduction in the off-peak season can offset part of the impact of price increases. 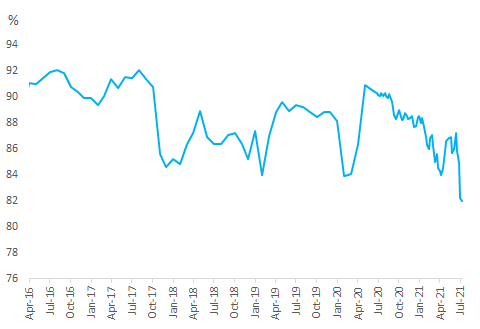 SMM Morning Comments (Jul 29): Shanghai Base Metals Trending Mixed after Obscure Fed Meeting Results
Shanghai base metals traded mixed after opening on Thursday morning, as Fed failed to set a timeline for tapering asset purchase, and COVID-19 pandemic made a comeback. Meanwhile, their counterparts on LME mostly went up.

Copper News Roundup
It was reported that the equipment of a smelter in Shandong suddenly failed last weekend, and it is estimated that it will take at least one month to repair.