CST
Source:SMM
Inventories of refined nickel in the Shanghai bonded areas decreased 400 mt from a week ago and stood at 10,300 mt as of July 2, showed SMM data.

SHANGHAI, Jul 2 (SMM) – Inventories of refined nickel in the Shanghai bonded areas decreased 400 mt from a week ago and stood at 10,300 mt as of July 2, showed SMM data.

As inventories of nickel plates in China were at a low level and the import window was open, hundreds of mt of Russian nickel stocks were imported into China after customs clearance on week. Trading of nickel briquettes in US dollars gradually picked up recently, and the warehouse receipt prices of bonded area rose to around $210-230/mt. The cargoes are expected to be released one after another in the later period. The quantity of LME nickel briquettes out of the warehouse continued to be stable, while most of them were locked by downstream buyers on the way back to China by sea. It is unlikely that they will flow into bonded warehouses later. It is expected that Shanghai bonded refined nickel stocks will continue to decrease in the later period. 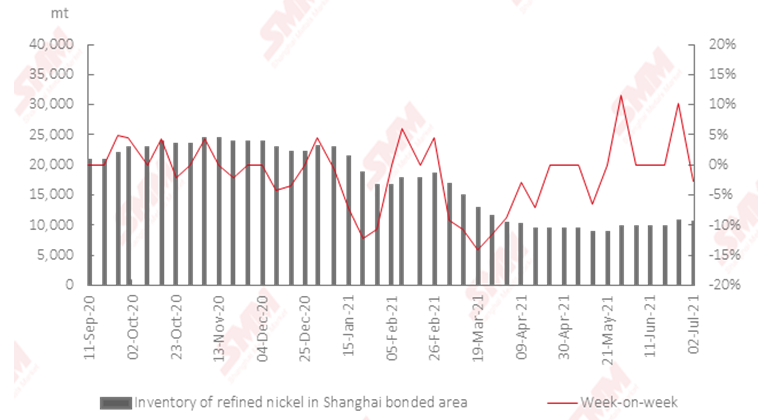